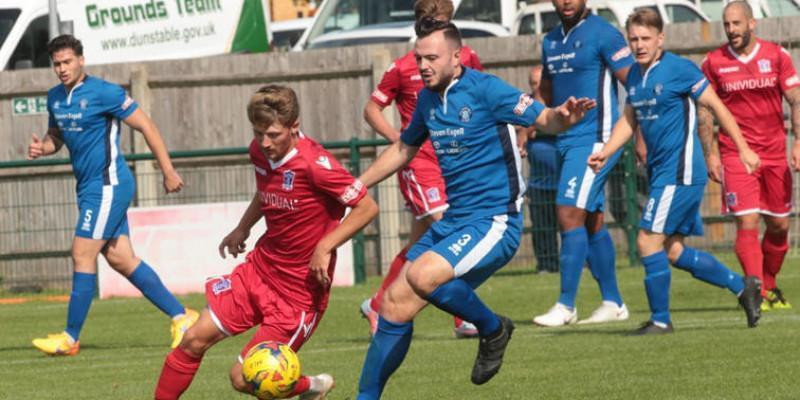 A disallowed goal was the only real talking point after a quite awful FA Cup First Qualifying round game at Creasey Park that ended goalless. In the 67th minute, Luke Williams played a loose ball back to Zak Westlake down the right touchline, who in turn, under pressure, played a wayward pass into Josh Hill who was off his line and had to scramble back towards his own goal. As he controlled the ball, AFC’s Joel Norris challenged Hill with a slide tackle and as he won the ball, controlled it with his hand before firing into the unguarded net.

The referee gave the goal, despite the linesman seeing and flagging for the infringement before then lowering his flag. ‘Marine’s back four protested before Referee Cooke consulted with the linesman and the goal was chalked off, which led to a couple of minutes of further protests from the home players and dugout before Cooke restored order and the game continued.

Dunstable had the first chance of the game in only the second minute as Adam Watkins volleyed over from 20 yards. ’Marine should have been a goal up ten minutes later when Williamson crossed into the box to Fleetwood, who took a touch before dragging his effort wide of the post. It was a big chance that we have already become used to seeing the experienced striker tuck away in Supermarine colours.

Marine applied pressure through large chunks of the first half, but again, poor crossing, a lack of a killer final pass and Dunstable players throwing themselves in front of the ball saw the away side fail to trouble Jamie Head into any real action as Conor McDonagh and Josh Parsons saw shots blocked and a number of corners lead to nothing.

Early in the second half, McDonagh had another chance to open the scoring as Joe Selman played him in on goal, but Head narrowed the angle and made a great save to deny him. The OD’s went straight down the other end of the pitch and could have opened the scoring themselves when Norris got the better of Dan Williamson down the right hand side to put an effort right across the face of goal and out for a goal kick.

Parsons again went close as he put an effort over the bar after a pull back from McDonagh before Michael Hopkins free kick went just wide of the far post. Hopkins saw another free kick fail to hit the target before the game finally came to an end and we’ll all have to do it again on Tuesday 4th September at 19:45 at the Webbswood. The draw for the next round takes place on Tuesday 28th August, so both teams will know who will potentially await them in the second qualifying round with close to £3000 prize money at stake.