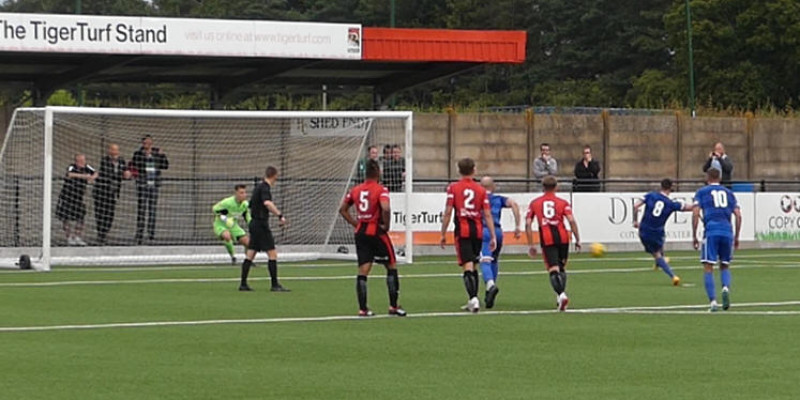 The visitors kicked off proceedings and took the lead after ten minutes when HARRY WILLIAMS was on hand to finish after Sam Ayres had parried an initial shot from Henry Spalding. Within a minute Cirencester levelled when a Ben Tunnicliff cross from the left corner was diverted past Martin Horsell by a covering defender Matt Liddiard for an OWN GOAL to make it 1-1.

‘Marine’ pressed to create a couple of good chances but it was the hosts who took the lead when Mike Pook sent a deep cross from the right flank to the far post where Aidan Bennett flicked it to the edge of the six-yard box for a supporting TOMMY OULDRIDGE to tuck it inside the left post for 2-1.

As the visitors pressed again a neat exchange between Brad Hooper and Jamie Edge resulted in a one-on-one between Hooper and Ayres but the ’keeper was in position to make the save. A few minutes later BRAD HOOPER was involved again as he levelled from the penalty spot after Williams was brought down by Anson as he darted into the home penalty area, 2-2. Leading up to the interval ‘Marine’ created a couple of chances with Williams coming closest as Ayres pushed his effort onto his cross-bar for a corner kick.

During the break ‘Marine’ made a number of changes whilst Cirencester made three and it was the home side who started strongly as Horsell made three solid saves within the first six minutes to prevent trialist Jonny Dennis, Josh Parsons and Will Christopher getting on the score-sheet. On the hour more substitutions were made and shortly afterwards ‘Marine’ regained the lead following a free kick from the left front corner of the home penalty area that Bradley Gray fired at the target - Ayres parried leading to a couple more blocks before the ball found its way back to DAVE BAMPTON, 25 yards out – right channel, and his fierce strike rocketed into the top right corner.

At the mid-point of the half more changes were made and once again a few minutes later ‘Marine’ scored again as JOE SHEPPARD converted a right wing cross from Brad Gray at the back post. Two minutes later a fine Cirencester move reduced the deficit as Miles Arnold embarked on a strong run down the right flank before feeding trialist Rhys Sarson who flicked the ball on for a rampaging JACK FREEMAN to collect inside the right channel of the visitor’s penalty area. The midfielder cut left and struck a firm shot inside the far left post to make it 3-4.

During the closing stages Levi Irving came close to scoring a couple of times and Sarson saw an effort blocked whilst Stuart Fleetwood released Gray into the right channel of the home area where he fired over the bar. In hot, sticky conditions the teams put on an entertaining game of fast and furious football that belied their limited amount of training to date. A very useful ‘work-out’ for both teams – with no drinks breaks!