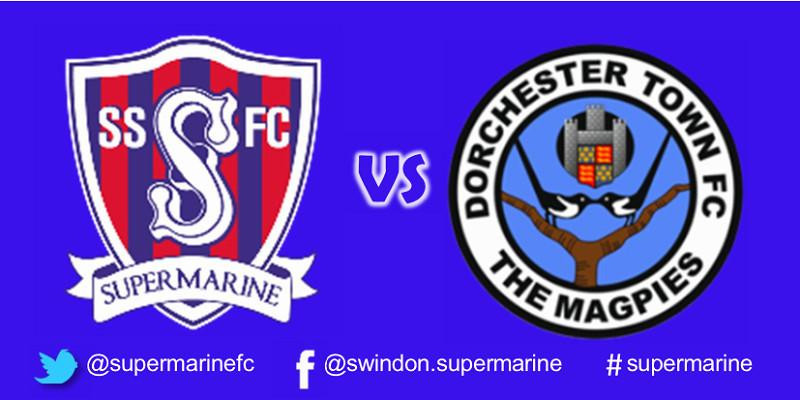 Swindon Supermarine return to action this SATURDAY 6th NOVEMBER at the Webbswood Stadium for a 3pm kick off in the PitchingIn Southern League Premier Division South.

Dorchester Town sit in 19th just outside the relegation spots, three points behind ourselves with 14 games played. The Magpies are under new management with Glenn Howes and assistant James Wood coming in from AFC Totton who they led to the top of the Division One South table, having previously had good success at Blackfield & Langley.

There recent form has been poor hence the change in management but they did pick up a useful three points at Tiverton Town with a 3-2 win just a few weeks ago. Key man for the visitors is Alfie Stanley with five goals this campaign, including a hat-trick at Tiverton, and he will need to be kept quiet on Saturday afternoon if Marine are to pick up their first win since Bank Holiday August.

Supermarine have themselves slipped to 16th in the table and now know this will be a key game if they are to start to turn things around. Missing out with injury is George Dowling with a thigh strain and Jamie Edge serves a one match ban for picking up five bookings. They will however hope to have new signing Kieran Phillips and Pierce Mitchell having recovered from injury, and Conor McDonagh will also be back in the squad having missed the game on Wednesday due to personal reasons.

Marine have beaten Dorchester on the last four occasions at home and are unbeaten in the last six meetings against the Magpies with the last wins coming all in 2020. A 3-2 win in the FA Trophy with goals from Pierce Mitchell, Jamie Edge and Michael Hopkins and a 2-0 with an own goal Josiah Dunstan and a second from Mat Liddiard and 1-0 with a Ryan Campbell goal in league wins in October and January so the omens are good.

We need your support more than ever to help carry us through to what would be a massive win. Please come on down!

Cash and card payments are accepted at the turnstile