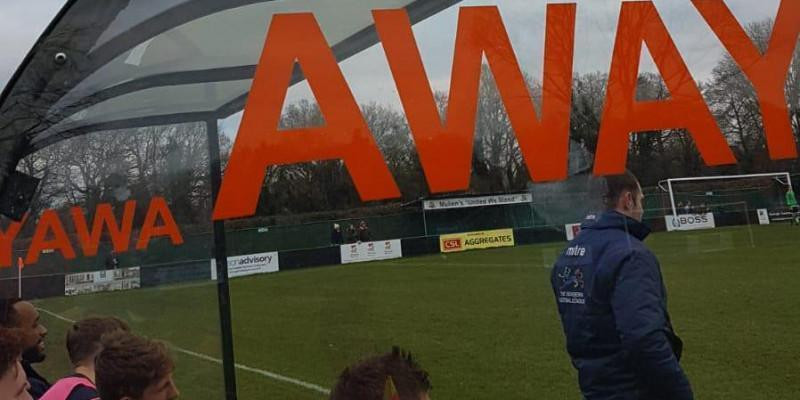 by Brian Davis (Media & Press Officer)
It’s now seven games unbeaten with three Desmond’s in four games after another 2-2 at Hartley Wintney on New Year’s Day for Lee Spalding’s team who maintained their top ten position in the Evo-Stik Southern League Premier South, although with the league so tightly bunched, only six points separate 9th and 20th and only 13 between relegation and the playoffs so there is no time for complacency despite the form.

The Blues got off to a flyer when Henry Spalding scored his third goal in six games firing home left footed from 18-yards underneath Reading FC work experience placement goalkeeper Adam Desbois to give Spalding the perfect start in the seventh minute.

Both teams traded chances as Mickel Platt headed wide when he really should have hit the target, with Connor Thompson also missing the target cutting in on his left foot at the other end. Platt then curled wide from 18-yards when Marine failed to clear their lines and Hartley quickly showed off their own credentials as to why they are doing so well at this level when they scored twice in two minutes to turn the game on its head with some crisp flowing football and clinical passes splitting the travelling back four open twice like a hot knife through butter.

The equaliser came when Marley Ridge played the ball into Jack French on the edge of the box who in turn played the ball back to Ridge who skipped Jerel Ifil’s challenge into the box and couldn’t miss as the static back line watched on, rolling his effort underneath Will Henry. Déjà vu struck straight after when Platt got free in the box and played the ball across to Mitchell Parker who finished almost identically.

Conor McDonagh looked to have equalised shortly after, but his chip from the corner of the penalty area went just over the bar and rolled down the back of the net, from the vantage point of almost everybody on the right hand side of the pitch, it looked in.

Joe Felix forced Henry into a fine diving save. Josh Webb who was now running the game for the hosts fired just over the bar from 20 yards and Dan Stewart also tested Henry from distance but could only hit his effort straight at him. McDonagh then really should have equalised as he knocked Stuart Fleetwood’s cross wide when it looked easier to score. Ryan Campbell curled an effort wide, right on the stroke of Half Time.

Supermarine caught the home side fast asleep as they attacked straight from the opening kick off after half-time with Henry Spalding seeing his shot blocked for a corner. Spalding took the corner himself and Jerel Ifil wandered into the box almost unnoticed and was left unmarked at the back post to thump his header past Desbois for his second goal of the season.

The game’s next talking point came on the hour mark when Hadda Zongo appeared to go in high and reckless on Brad Hooper and after calmly processing the incident, referee Sunny Gill produced a red card for the centre half. Five minutes later Fleetwood looked set to add another goal of the season contender to the teams recent spree, picking the ball up in his own half before dribbling past the trailing defence, turning a couple inside out on the edge of the box to create some space but couldn’t quite come up with the finish when his effort just curled away wide of the far post.

Hartley Wintney might have been lucky to not be reduced to nine men when Joe Felix’s challenge on Ryan Campbell on the edge of the box went by with just a lecture not even a yellow card from the referee which was baffling? With the ball in a great position Thompson’s free kick eluded everybody and went tamely out for a goal kick.

Jamie Edge then showed excellent vision to send Spalding clear into the box with a pass that split about four defenders but with just Desbois to beat, Spalding’s effort went agonisingly wide. As the game entered it’s closing stages the home side with a man disadvantage enjoyed some heavy pressure and possession, but the ever-running Parker and Platt couldn’t find a way past Henry. Felix again tested the stopper from distance as neither team could find a winner.

“It was a game of two halves,” said Spalding after the game. “We started well and scored a good goal to go 1-0 up, but Hartley always looked like they had a threat in the first half and looked lively. I think it was within the space of a minute that they scored two quick goals. As a defensive unit, we got caught a little bit open. They were good goals but, for me, they were just able to do it a little bit too easily, so that was disappointing.”

“We got in at half-time and on reflection then, I would probably have been happy with a point, but we came out and scored really early to level it up. I felt we had the momentum then and we were the better side straight away. They weren’t on the front foot as much and weren’t as threatening, whereas every time we went forward, we looked like scoring.” “The most disappointing thing was that we had three good chances to finish the game off, but we weren’t clinical enough to do that. It is not an easy place to go but I thought the lads did well and gave a good account of ourselves so a point away from home was decent.”