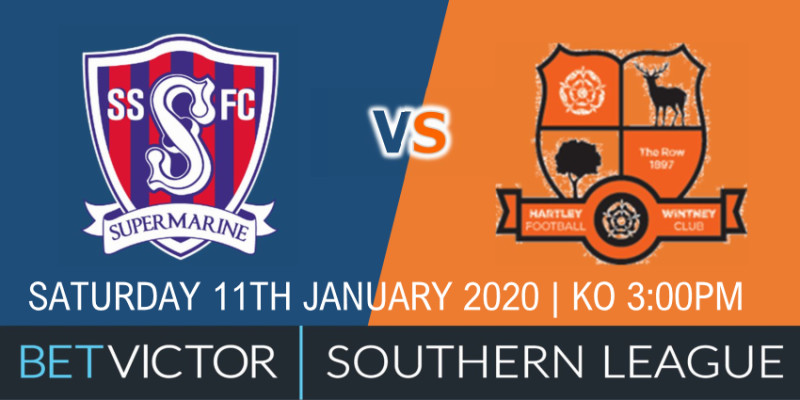 Hartley Wintney cannot be taken for granted by Swindon Supermarine this weekend, according to club manager Lee Spalding. The Hampshire club has accumulated 24 points from their opening 21 Southern League fixtures this term – a number Spalding brands as totally false having faced the villagers once already this season. On that occasion, a Stuart Fleetwood penalty combined with Harry Williams’ effort earned Marine a 2-1 victory away from home in mid-August. Reflecting on that summer win, Spalding said Hartley Wintney are capable of beating any step three team on their day.

He added: “Hartley Wintney were a good side when we beat them earlier this season. “It was a good game on the day, and they had a lot of quality. They’re down the league table, and that doesn’t reflect their quality as a team in my opinion. “On their day, they can beat anyone. “I see this every week, but if we aren’t at it then we won’t get a result.

“It’s down to us, as the home team, to keep our league momentum going. I want us to take our performance from last weekend into this game and register a clean sheet – we’ve conceded a few goals in recent games. “We trained on Thursday night, and we did pick up a couple of knocks on Tuesday. “We’ve got a fairly clean bill of health, there are no serious injuries – just a couple are touch and go.”

The Webbswood Stadium outfit will certainly be keen to put their coin flip Southern League Challenge Cup loss to Frome Town behind. A penalty shootout loss against the high-flying Division One outfit denied Spalding’s troops a spot in the competition’s next round. Though understandably frustrated to lose the tie having established a one-goal lead with 10 minutes to go, Spalding hopes a cup absence can inspire a late league push.

He added: “The team performed well on the night, there were some positives to take from it. “We didn’t get beat in normal time, though we created enough chances to win the game. It’s disappointing we conceded after scoring so late on. “That was my biggest disappointment, but winning the Southern League Cup wasn’t my goal at the start of the season – the league is our priority.”