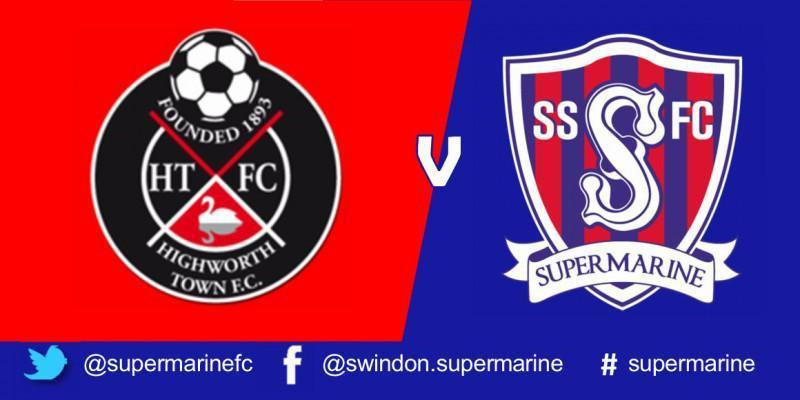 This Saturday 31st October at 3pm Swindon Supermarine take the short trip down the A361 to The Elms as they tackle Highworth Town in the FA Trophy 3rd Qualifying Round.

The Worthians play at one level lower than Marine in the Southern League Division One South and are managed by Ross Adams and the experienced John Fisher, a stalwart at non-league level for 30-years plus. This is the highest level the club has ever played and they have made a good start to their season sitting in 7th place having won 4 of their 8 matches.

Their earlier game in the FA Trophy saw them beat Winchester City at home 2-1, their first ever victory in the competition with Callum McGhee-Parsons and Ashley Edenborough grabbing the goals. This is the first time the two sides have met in a major FA competition.

In pre-season Marine won at The Elms 1-0 with a Kotwica goal, the last meeting was in October 2019 when Marine won 4-0 away in the Southern League Cup with Brad Hooper, Harry Williams, Conor McDonagh and Henry Spalding with the goals. Prior to that in November 2018 in the Wiltshire County Cup Marine won 2-1 with goals from Conor McDonagh and Stuart Fleetwood scoring.

Key men for Highworth are experienced striker Ash Edenborough (3 goals this season) and keeper Connor Johns with 5 clean sheets already – both of course former Marine men along with a few others in the Highworth squad.

Everyone is fit for Marine after a midweek training match against National South side Bath City, designed to give the whole of the squad a good 45 minutes at least but Matt Liddiard is suspended after his harsh double yellow last week and likewise for former Marine Rob Dean at Highworth, he is also suspended for the hosts after his red card last weekend against Winchester City.

“It will be a tough game, its never an easy place to go and they have had a good start to the season. The FA Trophy is a competition that we are looking to progress as far as possible in this season. We need to make sure we put in a workmanlike performance and win our battles all over the pitch, performing to the best of our levels.

If we do that we give ourselves every chance of getting into the hat for the next round. The game being a local derby is something will add to the match as a spectacle and we fully expect it to be highly competitive.“

£9 Adults, £7 Concessions, U12s Free when accompanied by an adult.