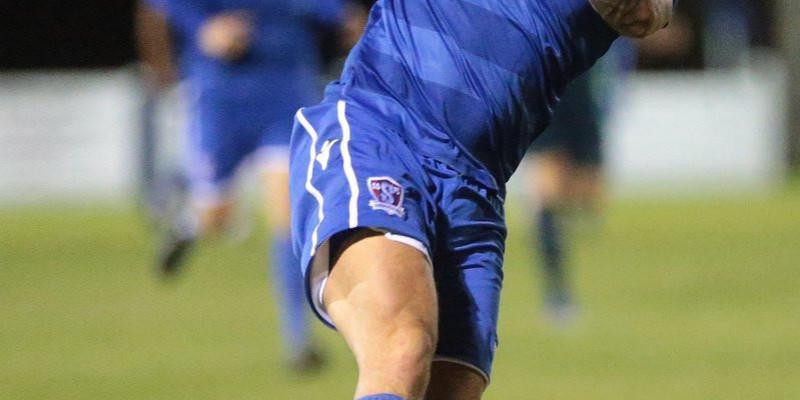 Supermarine were left to rue their missed chances at Hardenhuish Park last Saturday as Chippenham came away from the Webbswood with a 1-0 FA Cup Replay victory courtesy of a piece of sloppy defending and cool finishing from Nat Jarvis.

It was a game of few real chances and any quality as Chippenham changed their team from the one that was second best in the original tie, making four changes to their side to beef things up and play spoiler to ‘Marine’s fast-paced free-flowing attacking football.

Both teams had enforced Keeper changes as Conor Thompson came in for the Bluebirds due to an injury to Brad House at his parent club West Brom earlier in the day. Whilst Kev Sawyer replaced the injured Josh Hill in the nets for the home side. Marine’s Conor McDonagh also missed out due to injury with Ryan Campbell replacing him.

It was Sawyer who would be the busier keeper, and he was called into action as early as the seventh minute when he made a good low save from Jack Compton which was parried back out to James Guthrie, who fired his effort over the bar.

Both teams had long range efforts off target before Chippenham went even closer on 37 minutes. Mike Jones hit an effort low and across Sawyer that bounced off the inside of the far post and across the face of goal to safety.

In the second half, the visitors should have done better when Sawyer failed to gather in a cross and with Evans probably not anticipating the ball, missed the target. Chippenham’s direct style of football was putting pressure on the ’Marine back four and from a flick-on, Guthrie went through one-on-one with Sawyer, but dragged his effort across goal and wide.

Just before the hour mark, a foul on Brad Hooper drew a free-kick right on the edge of the box, but Michael Hopkins low curling effort, just didn’t quite bend enough and shaved the outside of Thompsons right hand post. Stuart Fleetwood then had a great chance to open the scoring as he pounced on a poor back header and with the ball bouncing and sitting up nicely in front of him, fired an effort over the bar.

Within a minute, another long punt down the middle of the field caused Jon Else and Babz Jarra to have a moment of confusion and when they collided, the ball dropped into the path of Nat Jarvis who took a couple of touches before poking the ball past Sawyer and it trickled into the far corner of the goal.

Sawyer then made another good save from Yan Klukowski with his feet as Chippenham tried to extend their lead. It took until the 82nd minute for Lee Spalding’s men to get a shot on target against Chippenham’s third choice keeper and even then, it was a tame effort that he easily gathered at his near post from Brad Gray.

It was a night that will not live long in the memory for anybody who was in attendance.
FT: 0-1
Attendance: 364