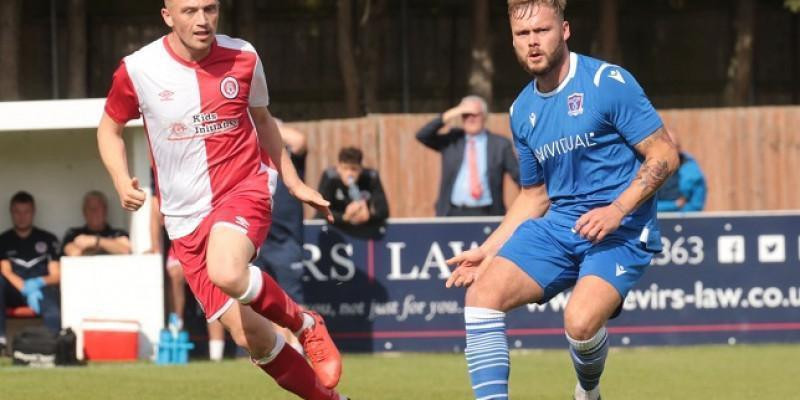 by Brian Davis (Media & Press Officer)
Lee Spalding’s Swindon Supermarine will feel like they should have gained at least a point against the day’s top of the table side Poole Town.

On the back of being the better side versus Salisbury and only gaining a point and a defeat at Merthyr ’Marine saw several chances fractionally miss the target that and on another day, could have even taken the three points on offer.

Following a fast start where both teams exchanged a series of corners, the home side had to reshuffle when influential left back Michael Hopkins was forced off with an injured hamstring.

Louis Spalding reverted back to his more familiar left back role with Joe Turley making the most of his opportunity performing well at right back.

Ollie Dennett curled wide for The Dolphins for their only real chance of the first half ahead of Stuart Fleetwood forcing a save from Luke Cairney with an effort from distance.

Conor McDonagh then curled an effort just wide from a wide angle from a Fleetwood through ball and the striker then headed a fraction past the post when Ryan Campbell sent over a dangerous left footed cross.

New signing from Hampton & Richmond Simon Downer (pictured below) should have put the blues one up just before the break but his header from the centre of the box went post and behind for a goal kick. 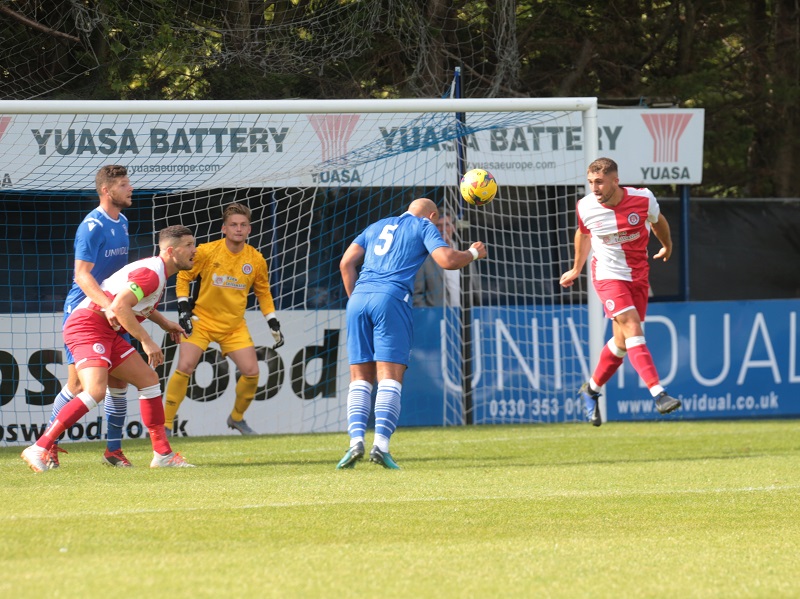 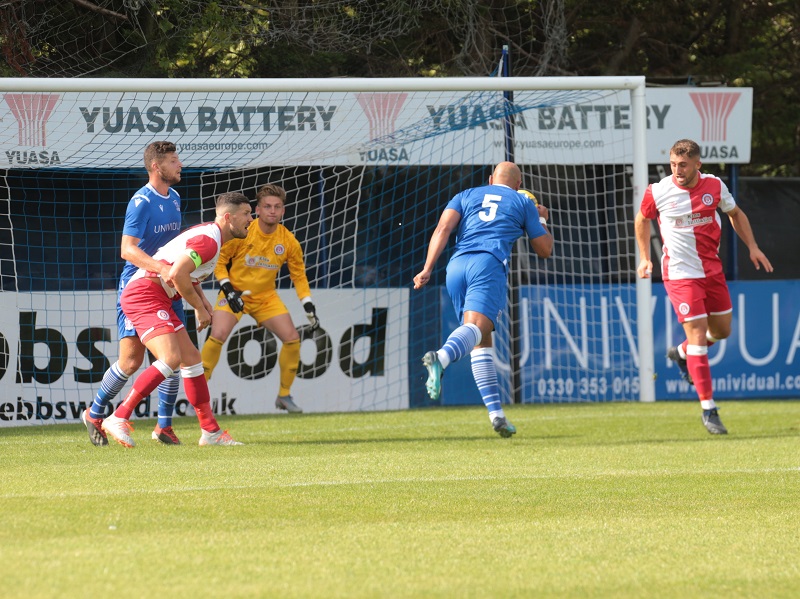 Home keeper Martin Horsell made two excellent saves to deny a Marvin Brooks header and a Harry Baker effort before the league leaders took the lead when Corby Moore fired home from 22-yards as the home side failed to close him down as he grew into the game pulling all the strings in midfield for the away side.

The games last chance fell to home forward Kane Simpson but his sights were slightly off as he cut inside his marker and curled his effort a shade over the bar.

After the game Spalding felt his side’s performance was a significant improvement upon the one they turned in when going down 3-1 at Merthyr Town last time out on Bank Holiday Monday. The primary negative from this weekend’s match was that his side failed to make the most of the chances they created, so the Marine manager is keen to see his forward players develop a more ruthless edge.

“Overall, I thought it was a good performance. The lads played well,” said Spalding. “It was a massively-improved performance from the Merthyr game, and I thought there were a load of positives to take out of it. “We were the better side in the first half. We created three good chances but we didn’t take them. “As long as we are creating those chances, we are capable of winning games. We just need to be a little bit more clinical.

“We just have to keep our heads down, keep working hard, and as long as we take those chances when they come along, we will start winning games. “Poole are a good side. They passed the ball well and had a lot of possession but they didn’t really cut us open or have any clear-cut chances in the first half,” said Spalding.

“They did have a lot of sustained pressure in the second half, but if I had one criticism off us, it was that we probably gave the ball back a bit too quickly. “We did struggle to get out of our half at times but when we did get the ball forward, we created two really good chances. On another day, they go in and it is a different game.” 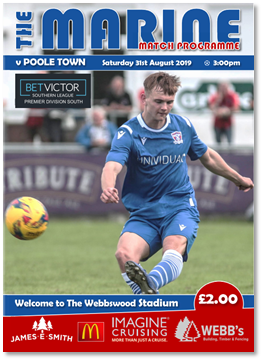