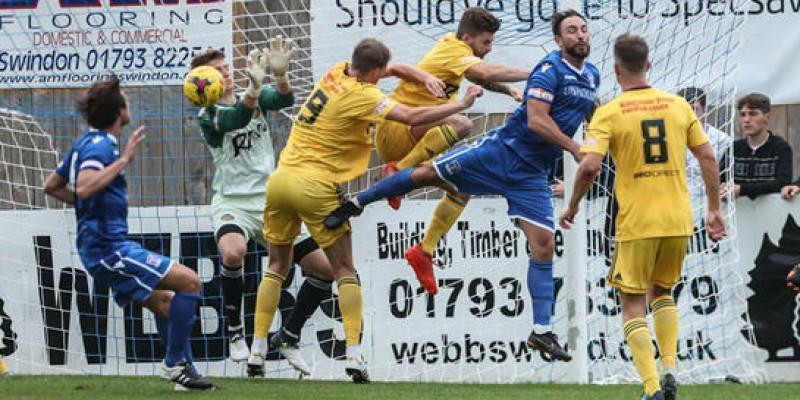 Swindon Supermarine tasted defeat in their opening day Southern League Premier Division South fixture at The Webbswood Stadium against an experienced Tiverton Town side in a match in which the hosts deserved at least a share of the points, writes Nick Taylor.

Tiverton, under the guidance of vastly experienced manager Martyn Rogers, finished in sixth place last season and, with the vast majority of their squad retained for this campaign, it was always going to be a tough, physical encounter for Lee Spalding’s squad.

Spalding gave a debut to recent signing Luke Williams in midfield, who impressed in the opening exchanges played at a frantic pace. On 10 minutes, Marine winger Joe Selman volleyed over Liam Armstrong’s crossbar after full back Michael Hopkins had floated in a dangerous cross.

The visitors then almost grabbed the opener when Exeter City loanee Josh Key tricked his way to the by-line before squaring back for Tom Bath to guide the ball agonisingly just wide of Josh Hill’s near post. Tivvy did find the net on 24 minutes, only to see referee Andrew Sheppard rule Mike Landricombe’s header from River Allen’s cross offside. Just before the interval, Marine centre forward Stuart Fleetwood, who received a lot of physical attention by the visitors’ defence, wriggled through and fired his shot into the side netting, with a section of the 247 supporters believing at first that his effort had gone in.

With no changes at half time, Tiverton made the brighter start in the second half, the busy and bustling figure of Levi Landricombe. Last season’s top scorer for the away side, causing the Marine defence concerns with his clever running off the ball. Landricombe, brother of team mate Mike, flashed a volley just over Hill’s crossbar before capitalising on a Dan Williamson misguided header, which the Plymouth-based poacher controlled on 54 minutes, before coolly rounding Hill to tap home and make it 1-0 to the Devon side.

Home keeper Hill did brilliantly to then tip over a long-range rocket from the confident Levi Landricombe for a corner. Bristol Rovers loanee Liam Armstrong had to be on his toes on 64 minutes as Fleetwood played a one-two with Conor McDonagh before the keeper blocked bravely at the ex-Luton Town player’s feet. Tiverton midfielder River Allen produced a Beckhamesque long-range strike two minutes later which just cleared the crossbar, to the relief of the retrieving Hill.

The Marine keeper was then called on to snuff out a break through in the Marine defence by the impressive Key after their offside trap failed to work, blocking with his body well. Referee Sheppard was at the centre of controversy two minutes from time when Williams glided through a challenge only to be agriculturally upended by Tiverton centre half Ben Mammola just inside the box, but the Hartbury-based official waved away the home side’s appeals. Marine almost snatched a point in the last few seconds when McDonagh fired wide from a corner , but it was not to be as Tiverton claimed their first win on an opening day in 10 years.