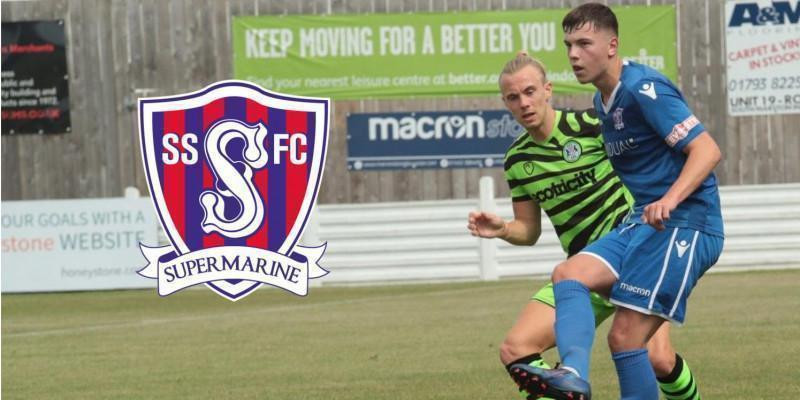 by Brian Davis (Media & Press Officer)
First half goals from Shawn McCoulsky and Taylor Allen were enough to see Forest Green Rovers secure victory at The Webbswood as a late goal back from trialist Kane Simpson wasn’t quite enough for the home side in another entertaining preseason friendly.

Forest Green, like Swindon Town, decided to field two different sides for each half, fielding new signings Matt Mills, formerly of Reading, Leicester, Bolton and Nottingham Forest, Liam Kitching (Leeds) and Adam Smith (Bristol Rovers) in the first half, whilst the second half team included many of the first team that made the League 2 playoffs last season. 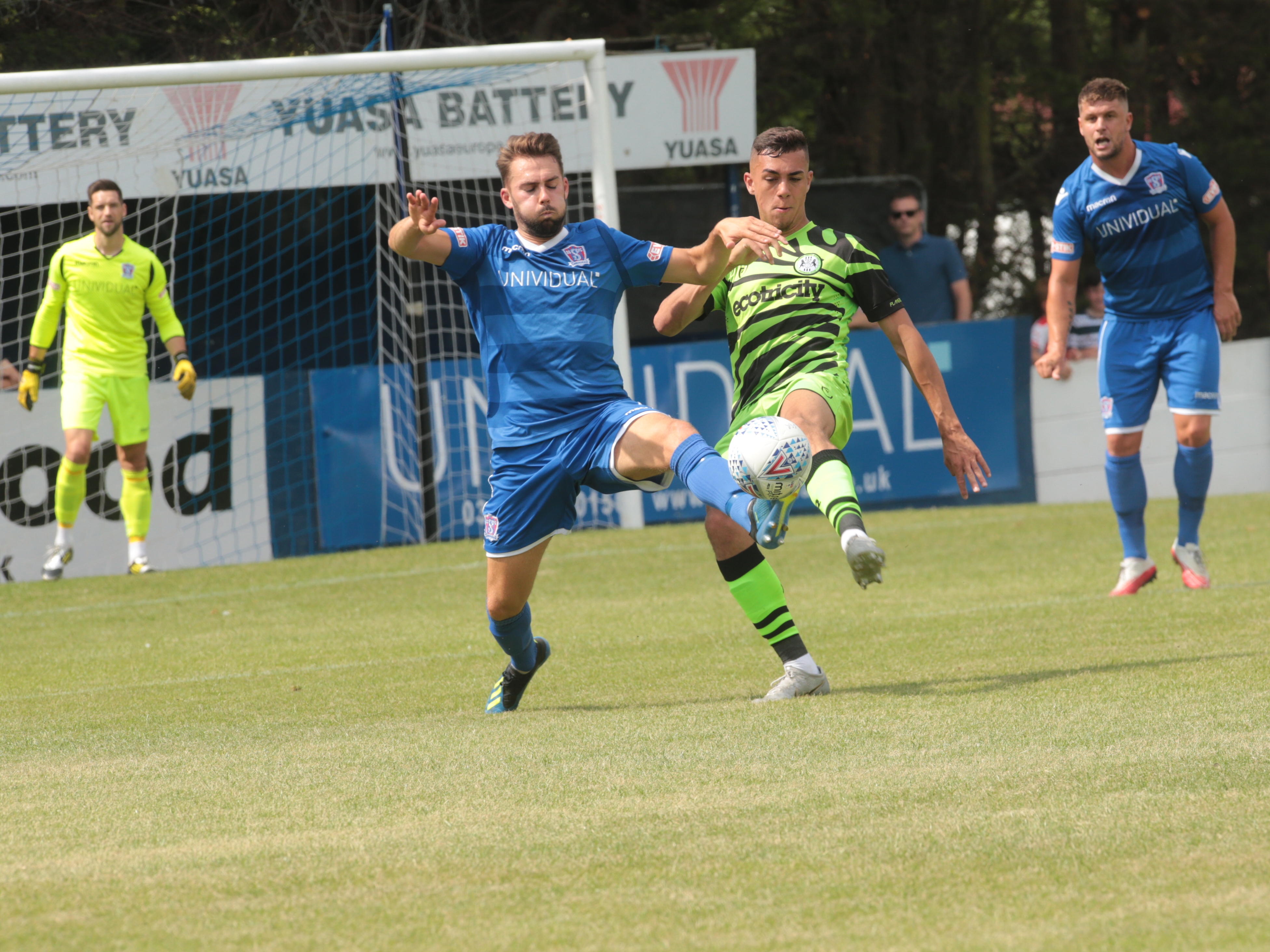 Both sides could have scored early on with Mark Cooper’s side missing a great chance as early as the second minute when Allen bore down on goal and saw his effort parried back out to McCoulsky by Martin Horsell and the strikers follow up was blocked out for a corner by the keeper.

Former FGR striker Stuart Fleetwood will be disappointed to have not scored against his old club when he got past Mills into the box and forced a good save out of Smith.

Allen then forced a good save out of Horsell before McCoulsky broke the deadlock in the 24th minute when he latched onto a ball down the right, getting to the ball ahead of Bampton before closing in on goal and finishing low under Horsell. 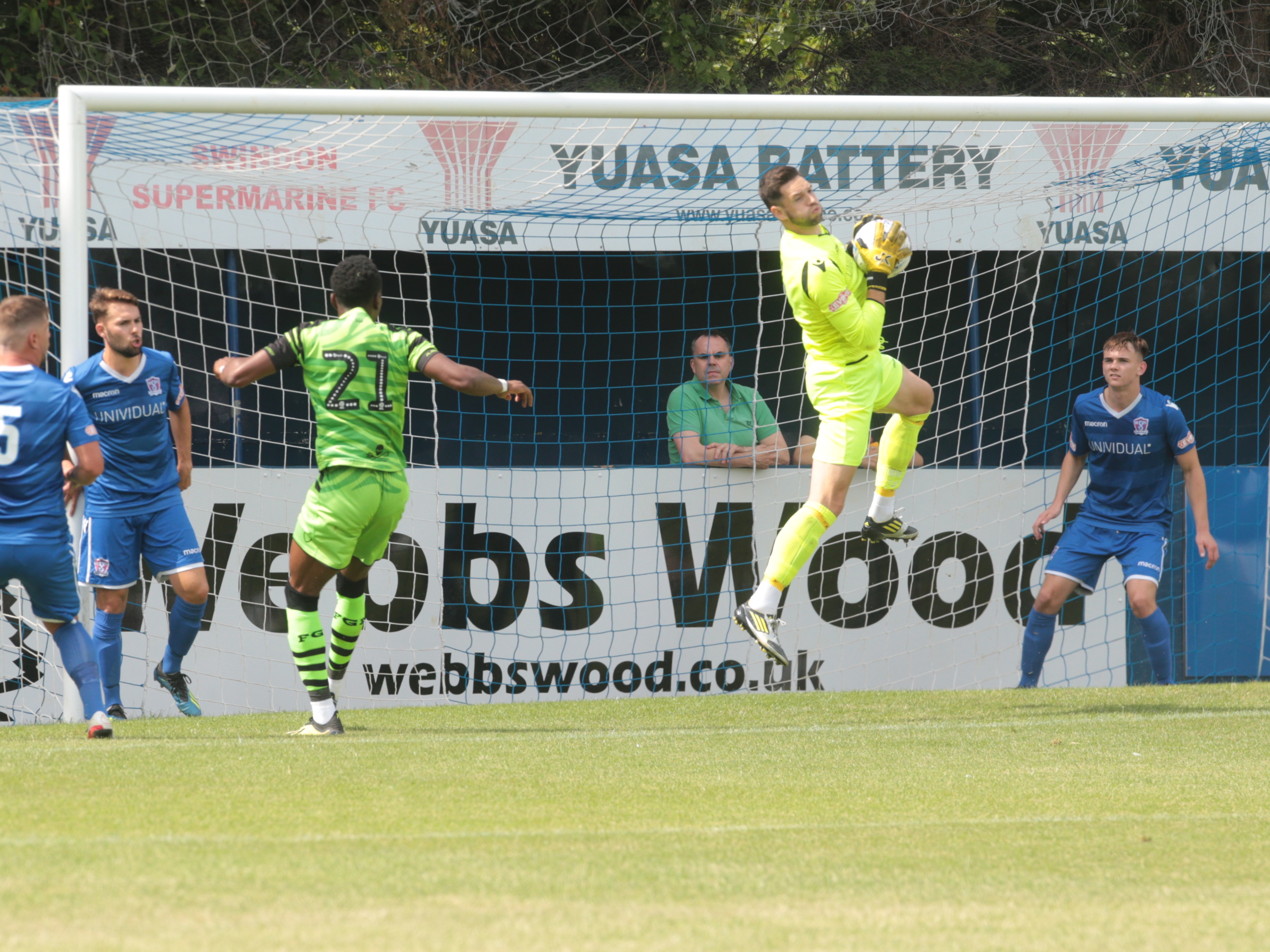 Rovers second goal came in the 38th minute when a fine passing move was finished off by Smith who confidently found the far corner of the net from Ebou Adams pass across the centre of the penalty box.

The league side should have been three up shortly after the half, but from Junior Mondal’s pass, Dayle Grubb somehow missed the target and his effort fell wide of the far post.

With just under 20 minutes to go, the away side were denied by the frame of the goal, when Shepherd got in behind the home defence and cut back for Grubb whose low effort came back off the post. 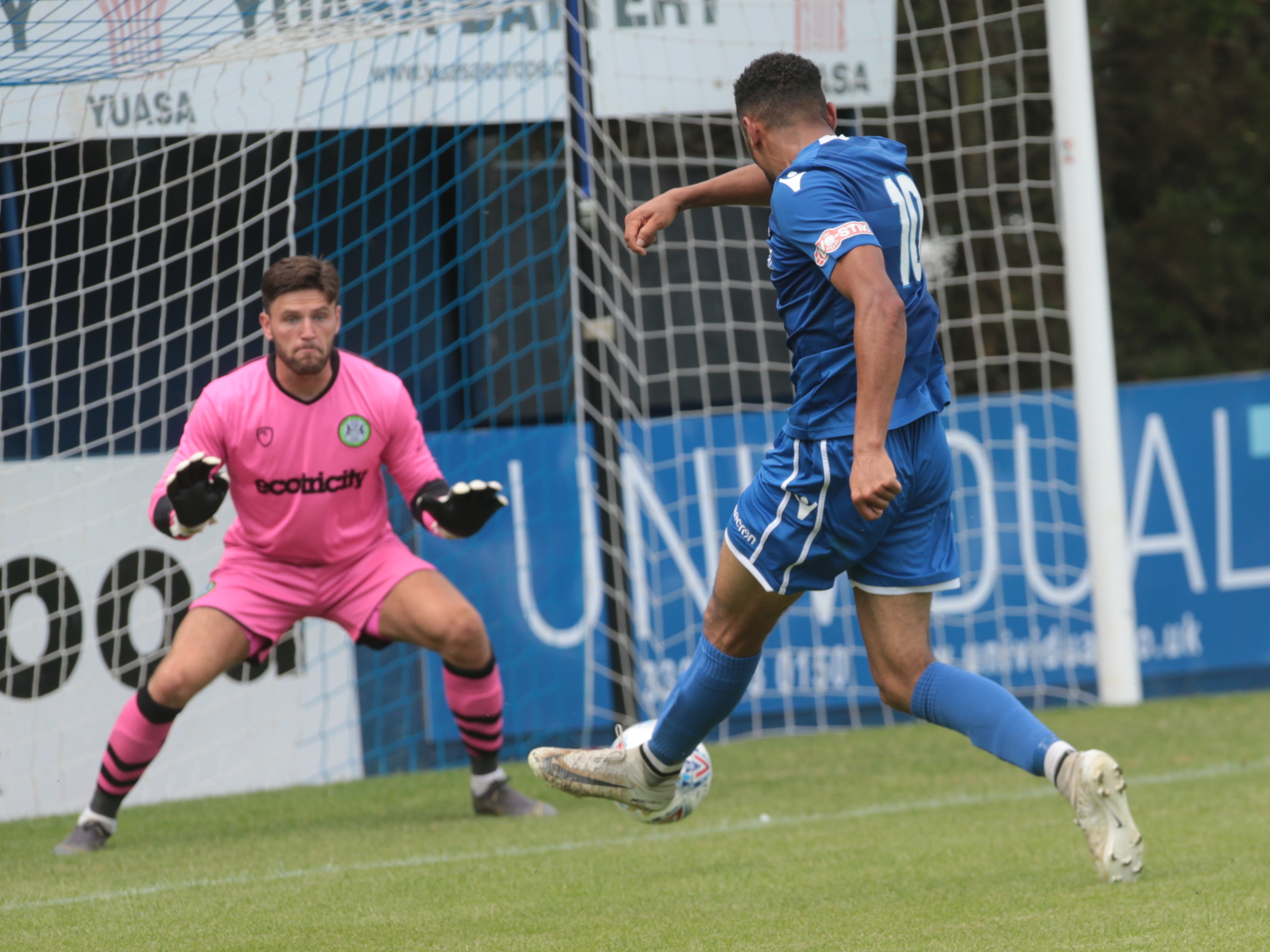 The lack of clinical finishing could have cost the visitors as Kane Simpson who had had an excellent game to this point, was played in on goal by Fleetwood and he composed himself before hitting an effort goalward that James Montgomery got his hands to, but it wasn’t enough to see the ball fall beyond him into the corner of the goal. 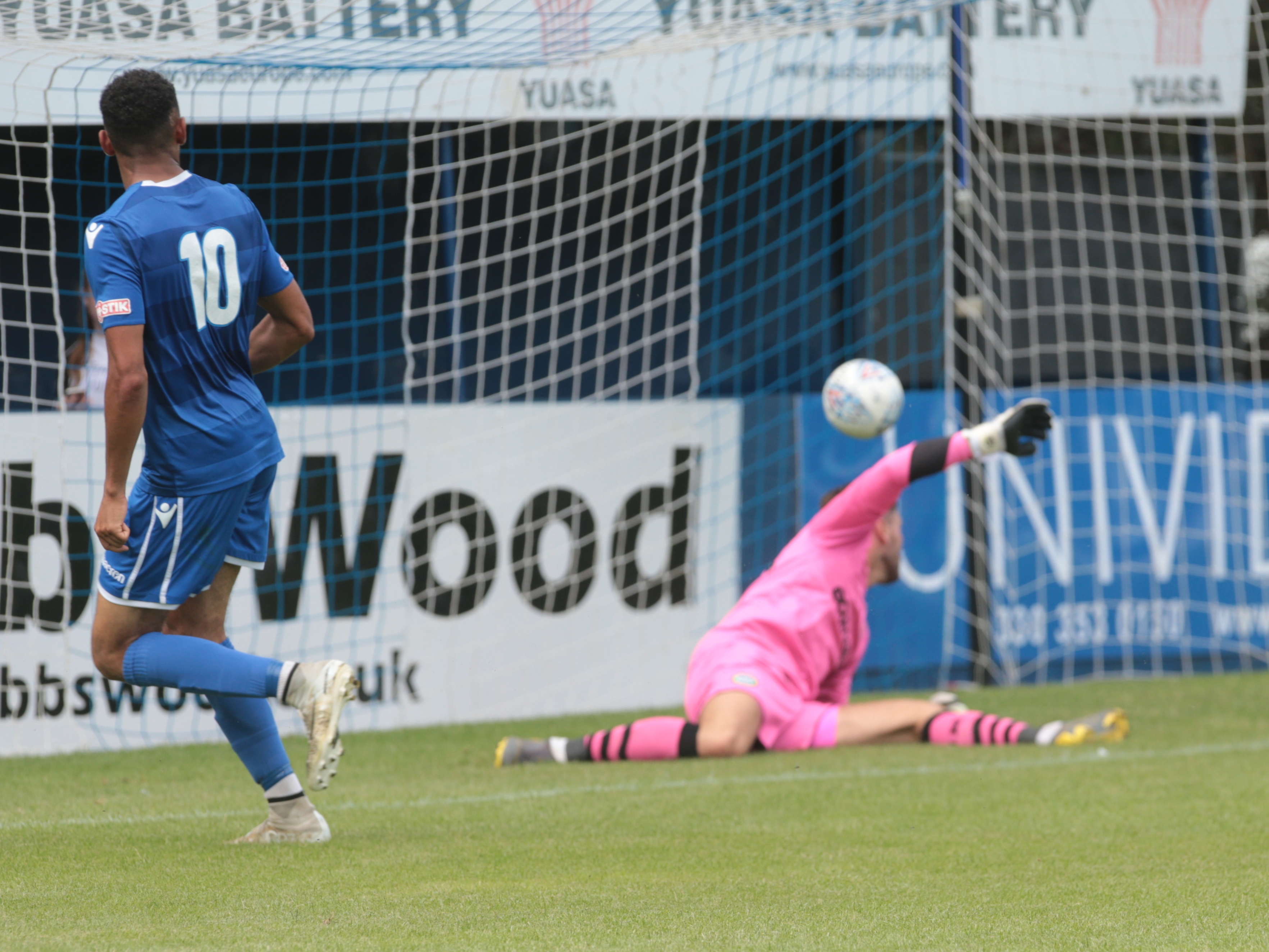 In the final minute Harry Williams could have equalised in the 90th minute but when he burst onto the pullback he blazed over the bar.

Forest Green Rovers completed a 2-1 victory over Swindon Supermarine in their second pre-season game of the summer. Fresh from his goal against Cardiff City, Shawn McCoulsky opened the scoring before Taylor Allen doubled the advantage in the first half, with triallist Kane Simpson for Supermarine halving the deficit in the second half.

In the first to be played in front of an awaiting crowd, there was a good showing at the Webbswood Stadium on a hot afternoon in Swindon. Manager Mark Cooper opted to play two different sides in each half, both lining up in a 3-4-2-1 formation. It was a bright start from the visitors, who looked to dominate the ball early on, and within minutes Allen was bearing down on goal, his shot only being parried to McCoulsky in the six-yard-box, whose shot on the turn, from a tight angle, was well saved.

The hosts got their first chance of the afternoon in the 16th minute when former FGR forward Stuart Fleetwood got in behind down the right and after riding the challenge of Matt Mills in the box, forced a fine save from Adam Smith. The chance was a mere lapse for Cooper’s side, who continued to control the ball for large parts and Allen, playing in one of the two number 10 roles behind McCoulsky, was looking in the mood. In the 19th minute he forced a good fingertip save from Marine stopper Martin Horsell, before then clearing the bar three minutes later from the edge of the box.

The breakthrough came in the 24th minute when McCoulsky showed his strength to brush aside Dave Bampton, leaving him one-on-one as he made a beeline for the box. From a tight angle, he had the option to square the ball but showed his confidence as he slotted under Horsell to net his second in as many games.

FGR’s second of the game came in the 38th minute as they showed what they can do with the ball as they passed it from one side to the other before Ebou Adams spotted the gap in the defence to slide in Allen. The teenage forward, who joined at the tail-end of last season, made no mistake as he found the far corner with aplomb. Rovers saw out the remainder of the half with relative ease before seeing the entire eleven changed for the second period.

Within three minutes, Liam Shephard, fresh from knee surgery in the summer, was marauding down the right wing, playing a low cross to find one of two triallists who featured. The ball was squared back to Junior Mondal, who set the ball for Dayle Grubb, who saw his effort go agonisingly wide of the target.

Chances continued to fall Forest Green’s way and in the 63rd minute a driving run from Mondal saw him play a cute one-two with George Williams on the edge of the box before pulling his shot just wide. It was the post to next deny FGR in the 71st minute as Shephard again got in behind, cutting back from Grubb, his low shot striking the foot of the far upright.

Forest Green continued to push for the elusive third and could have had it in the 77th minute when Williams skipped effortlessly across the box before playing in the left wing-back but his cross was just behind Mondal charging into the six-yard-box.

Rovers were made to pay for their lack of a clinical edge almost immediately as Supermarine broke down the other end and Fleetwood played in a nice ball through and despite James Montgomery getting a hand to the shot, he was unable to prevent it creeping into the net from the foot of Marine’s Simpson.

The hosts had the chance to level late on when they got to the by-line in the 90th minute but Harry Williams, running onto the cutback, couldn’t get over the ball and saw his shot fly over the bar to the relief of the FGR backline.