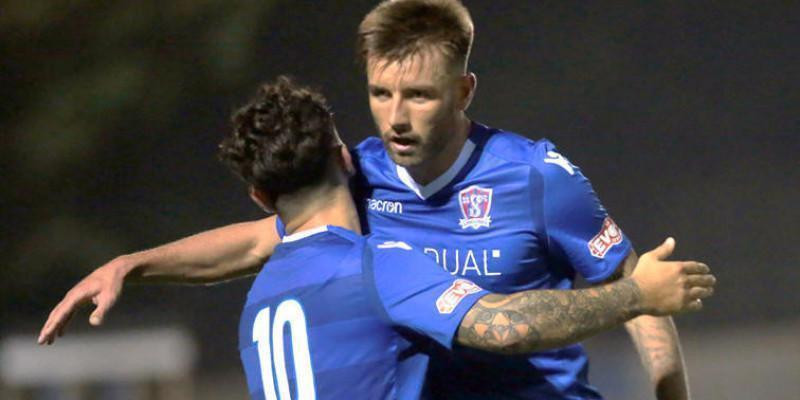 After another slow start at The Webbswood, ‘Marine made their second half pressure count against AFC Dunstable to advance through the Preliminary round of the FA Cup and into this Saturday’s First qualifying round versus Suffolk Step 5 outfit, Woodbridge Town. AFC had the first chance of the game when midfielder Dave Bampton cleared an effort off the line following a corner before he left the field with a hamstring injury ten minutes later, replaced by Brad Hooper.

‘Marine were unfortunate to not be awarded a penalty a minute after Bampton’s clearance, when Josh Parsons pounced on a poor back-header and as he went towards the bouncing ball, appeared to be kicked near the face and went down to huge appeals from the home crowd and players, only for both the referee and linesman to remain unmoved and play continued until Parsons received treatment.

Matt Coupe could have had The Blues a goal up before Half-Time, but miss-timed his near post header from a Michael Hopkins corner and with Stuart Fleetwood lurking, the keeper flung his body at it to claw the ball off the line before being hooked to safety.

‘Marine came out all guns blazing to start the second half and it wasn’t long before they had their noses in front. Ryan Campbell who has been outstanding since his return to the starting line-up, went on one of his trademark runs down the left hand side, getting to the touchline to square for Parsons who couldn’t miss from a couple of yards out.

Fleetwood doubled the lead only seven minutes later when he robbed Chris Tavernier of possession in the left hand channel, advanced on goal and curled his effort into the far corner past Jamie Head in the Dunstable goal. The OD’s almost got a goal back from the kick-off when Norris’ header shaved the outside of Josh Hill’s post.

Joe Shepherd continued his knack of being in the right place when he attempted a wonderful scissors kick from a Joe Selman corner that came back to him after a Zak Westlake header, but his acrobatic effort went just over the bar. With Dunstable pushing forward, Campbell played a lovely long ball to Fleetwood, setting up a two-on-one chance, but Parsons couldn’t direct his volley towards goal from Fleetwood’s cross.

The physical Bedfordshire side forced Hill into another save when Dylan Baker hit a low effort that Hill saw late, but managed to save with his legs. With the 90 minutes plus extras up, Conor McDonagh played Parsons in one-on-one with Head and he coolly tucked his effort away to make the score 3-0.

It was a deserved win for ‘Marine who will be happy to have found their shooting boots in a game not to dissimilar to Saturday’s, where they did everything other than put the ball in the net. It’s early September and all three recognised out-and-out strikers are now off the mark which will be a big confidence boost to all as the hectic September schedule continues.