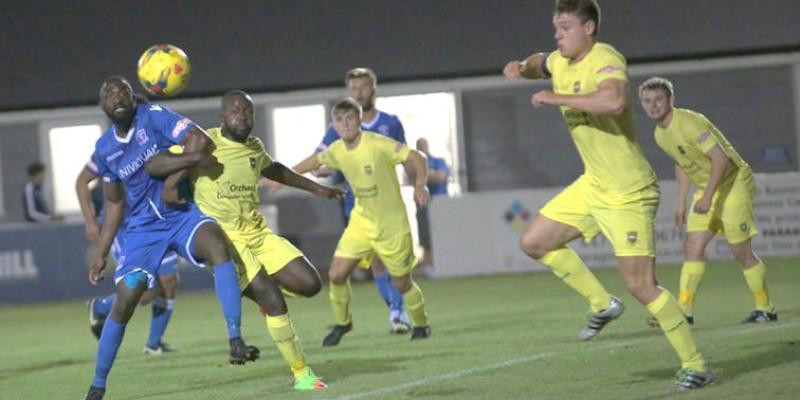 Lee Spalding utilised and showed the strength in depth in his Supermarine squad as he handed senior debut’s to three players versus Yate Town in the League cup fixture at the Webbswood. Experienced keeper Kev Sawyer came in between the sticks as Josh Hill was rested, whilst a new centre half pairing of ex-Swindon Town man Jerel Ifil and summer signing Baboucarr Jarra also made their first appearances for the club.

Despite the final score, Yate keeper Lewis Thomas put in a sparkling performance to keep the score down to four with a series of outstanding saves to deny ‘Marine on several occasions. The first two coming in the first twenty minutes as he flew full stretch to tip a Conor McDonagh shot from the edge of the box over. A handball in the box then gave the home side a penalty, which he saved by diving low to his right to deny the usually reliable Brad Hooper from the spot. Thomas then denied Dave Bampton’s far post diving header and Hooper’s long range effort as the home side continued to try and find a way past the on-loan Forest Green shot stopper.

They did eventually find their way past Thomas when Connor Thompson, returning to the line-up, fired high past him at the back post after a ball across the area from Hooper.  Hooper went close again, forcing Thomas into another fine save down low to his left, before home keeper Sawyer was eventually forced into action, denying Dave Simms-Burgess and right on the stroke of half-time, denied Yate again as he managed to get his frame in the way to deflect the ball up onto the post and away to safety.

McDonagh had two early second half chances as he saw a near post rising effort, just go over the bar and a header cleared away near the goal line from a Michael Hopkins free-kick. Hopkins would provide the key to the finding a way past Thomas for the second time as his near post corner found Jarra, who got ahead of his marker to steer the ball into the back of the net for a goal on his debut.

Yate continued to try and make the game entertaining and hit the post for a second time when Tony Rennie saw his effort come back off woodwork. As the game moved into the last ten minutes, ’Marine looked the far fitter side and scored twice, firstly through Joe Selman who picked up a cross from Jon Else, cut inside his marker before blasting an effort high into the net from 12 yards then Babz Jarra headed home a Hopkins corner.

Yate pulled a goal back when Simms-Burgess broke the offside trap, rounded Sawyer and finished well from a tight angle. Shortly after, Brad Gray sent in a wonderful cross that substitute Stuart Fleetwood volleyed towards goal and Thomas made a quite spectacular save to deny him, however, the ball fell straight back to Fleetwood’s feet and he knocked it back past Thomas to finish the game off.

A fantastic win in a much-maligned competition; that only brought more confidence back into the squad with some excellent performances, particularly from players who haven’t started in recent league games, making the most of their opportunity in the team against a Yate side that have won five from five in the league and also took Salisbury to a replay in the FA Cup recently.

Special mentions must go to the centre half pairing who read the game perfectly all night and looked like they’d played together for years. Connor Thompson showed once again why he is so useful to the squad, having an excellent game on the wing, before moving into the middle when Bampton went off injured shortly after half-time. Plenty of food for thought for Spalding, as he looks to continue the teams cup success at Chippenham in the FA Cup this Saturday.