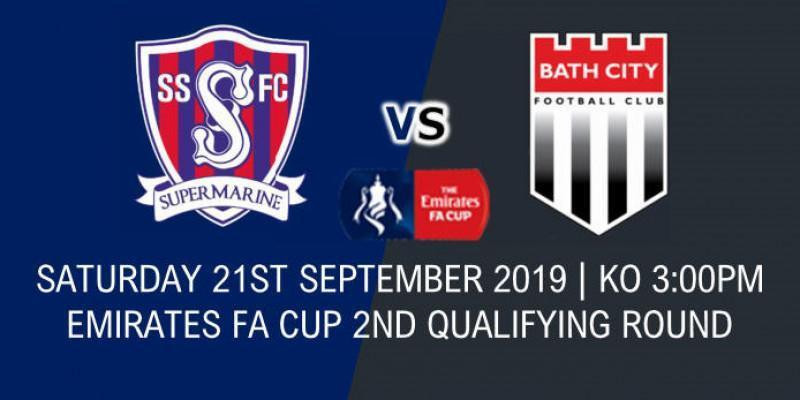 Supermarine manager Lee Spalding wants his players to use their FA Cup Second Round Qualifying tie against Bath City to show how close they are to the National League South side in terms of quality.

Marine welcome Jerry Gill’s team to the Webbswood Stadium for the tie with 29 league places between the two clubs, despite Spalding’s outfit playing just a division below in the Southern Premier South.

Marine dispatched Wantage Town 3-0 away from home in the First Qualifying Round, but now have a chance to progress in front of their own fans and Spalding believes home advantage could be key in providing an upset.

Furthermore, the Marine Chief is confident that given the players at his disposal – who he believes can play in higher leagues – an upset is not as much of a pipe-dream as some might think.

Spalding said: “Hopefully we can go out and cause an upset on the day, and when I look around the squad, with the players that we’ve got at the club – most of whom have played at a higher level – there’s no reason at all why we shouldn’t be competing against Bath.

“Yes, they’re a good side, but I think their form has been a little bit indifferent this season so far. “Even so, we will all have to be at our best to get a positive result.

“The pressure is all on them because there the team in a higher division and the expectation is therefore on them to make it into the next round. “But it’s down to us to change that, we’ve got a home tie, we’re in front of our own fans and it would be a good day for us to go and show how close we are to them.”

A bumper crowd is expected at the Webbswood Stadium on Saturday due to the locality of the contest and the fact Swindon Town are away from home in League Two. Spalding is banking on that special atmosphere being created from Cup games in years gone by as his side aim to upset the odds and edge closer to a spot in the First Round proper.

He said: “It’s definitely one to be looking forward to and there’s a real buzz about the place. “All the players are really looking forward to the game, as is everyone that is associated with the football club. “It will be a good day, one that we hope we can go into and enjoy, and hopefully we can get a positive result.”

Spalding has a full squad to select from with defenders Matt Williams and Michael Hopkins returning to the squad after injury. Williams returns after missing three games having tweaked his groin and Hopkins is returning after missing four games with a strained hamstring.

The club are advising the people arrive early as a big crowd is expected and there will also be other activities on the Supermarine complex tomorrow and parking will be at a premium.