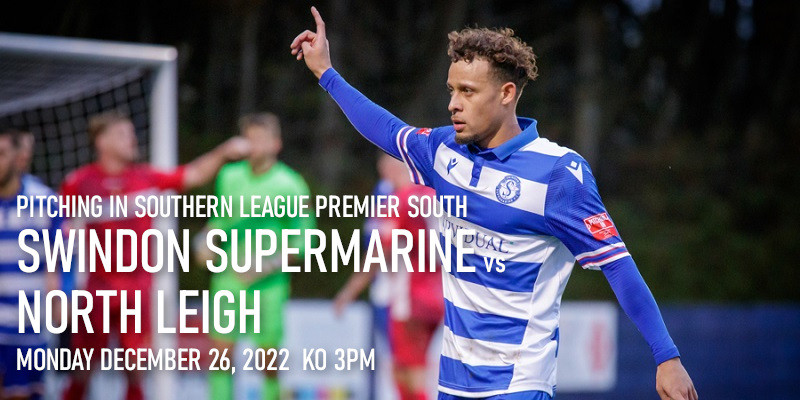 After three straight defeats, Lee Spalding’s Marine side will be hoping that they can return to winning ways and put a three-game losing run firmly behind them on Boxing Day when we welcome Chris Allen’s men to Wiltshire for our 2022 Christmas Jumper game.

The game marks the first occasion that the two side have met this campaign, and despite the visitor’s lowly league position, the Marine manager said he won’t be taking the opposition lightly.

“We’ve got to dust ourselves off, pick ourselves up and make sure we put on a real positive performance come Boxing Day,” he said following the sides recent exit from the FA Trophy. “North Leigh will be a really tough game. At the moment they’re bottom of the league so they’ll be fighting for everything and it’s important that we turn up and are ready to go.”

Despite a frustrating three game spell in terms of form, losing hasn’t been something that the club have had to endure often this campaign, and with between one and four games in hand over all but one of the eight sides immediately above them, returning to winning ways will get the side very much back in the hunt for the play off places – with the current top three sides Weston-super-Mare, Truro City and Chesham United, all beginning to open a lead on the chasing pack.

Meanwhile, looking at the clash former Marine player Michael Hopkins told his clubs media team that as a former Swindon Supermarine player, he can’t wait to return to Wiltshire for the match. “Supermarine are a very well-established team at this level,” he told Miller Bites. “On a personal note, it will be a nice opportunity to see some familiar faces at a place where I’ve got some really happy memories for several years so I’m looking forward to it.”

Another player expected to make a return is forward, Sal Abubakar having joined our visitors on Christmas Eve. The exciting 22-year-old joined Marine following a successful pre-season spell, however with the great start the club made to the season, the player struggled to break in to the side and has joined our visitors to gain regular game time.

Don’t forget to wear your Christmas Jumper to the game and if you do, you’ll only pay £5 at the turnstile!