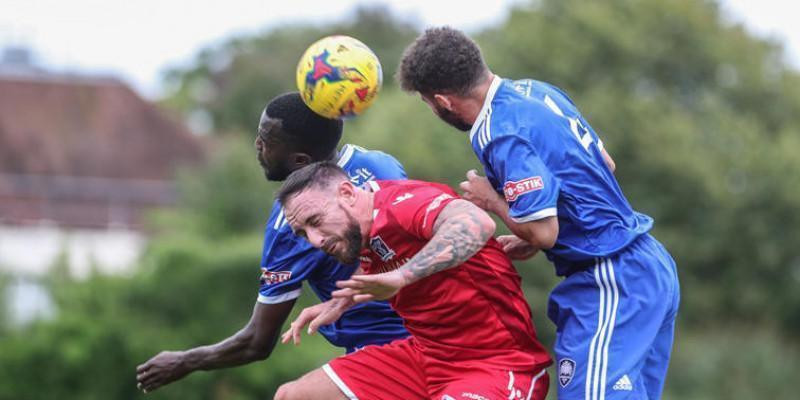 Supermarine gained their first win of the season at Imber Court, South West London after a comprehensive second half performance as goals from Conor McDonagh and Stuart Fleetwood saw off the previously unbeaten Met Police.

Brad Gray had the first chance of the game when Luke Williams broke free down the left and put in a deep cross that Gray stretched to get to at the back post, but couldn’t quite get his foot around it to direct his volley on target.

Gray would play creator for the next chance as his deep free kick was met by Zak Westlake but his header was turned over by Thomas Williams in the Met Police goal.

Supermarine went route one for the next chance as Josh Hill sent a booming kick downfield that the Police back four let bounce and Gray hit an early volley that just dipped over Williams’ bar.

Hill then made a couple of comfortable saves from the Met’s striker Jack Mazzone as the hosts had their first shots on target.

Brad Hooper then played in a delightful pass to Conor McDonagh who hit an effort just wide of the post. A minute later, McDonagh would go close again as he got in behind the back four but his low effort was comfortably saved by Williams.

Supermarine were dominating possession, but were just falling short with a killer pass or clinical finish. Mazzone would again come close as the clock ticked over the 45 minute mark after he shook off Westlake, but could only put his effort wide from the edge of the box.

It was a half of few major chances and any real quality as both teams struggled to carve out anything that would trouble either keeper too much in the final third.

Supermarine started the second half much brighter. Westlake had a header blocked from a Michael Hopkins corner, before Gray saw his follow up volley charged down before the deadlock was finally broken seven minutes into the second half.

Gray and Fleetwood combined well down the right hand side with some great interplay and McDonagh smashed home a volley from Gray’s cross to put the reds 1-0 up which was the first goal the Police had conceded this season.

Five minutes later Gray floated in a deep cross that was collected by McDonagh who laid a ball back to Brad Hooper on the edge of the effort who saw his side footed effort go just wide of the near post.

Over the minutes that followed, ’Marine carved out a number of chances as first Fleetwood chipped an effort across goal that drifted wide for a free kick before McDonagh curled wide.

The Blues had the next chances as Max Blackmore put an effort wide in a goalmouth scramble that went out for a corner. From the resulting corner, Mekhail McLaughlin rose highest at the back post, but saw his header headed off the line by Hopkins.

The game was as good as over in the 67th minute as Williams, under no pressure, scuffed his clearance straight to the feet of Fleetwood who took an excellent first touch, before running into the box unopposed, rounded Williams to fire into the empty net.

Fleetwood and McDonagh were a constant thorn in the side of the home team, as firstly Fleetwood got down the touchline to square for substitute Josh Parsons which was cleared for a corner. From the resulting corner, the ball fell to McDonagh who turned his defender inside out before forcing Williams into a great low diving save.

McDonagh would again go close with a quarter of an hour to go as he wriggled free at the far post, but could only curl his effort wide. Two of last seasons regulars, Parsons and Joe Selman, both subs today, were next to combine as Parsons crossed into the box, but Selman at full stretch, couldn’t quite get enough on his volley to steer it into the goal.

Substitute John Gilbert had a half chance for the Met, but his tame effort was comfortable for Hill. Mazzone again went close, but under pressure from Westlake, he steered his effort wide of Hill’s post.

Hopkins played a delightful 60 yard pass to Fleetwood who once again got behind the Met’s back four, but when going for another chip, he scuffed his effort wide of the near post.