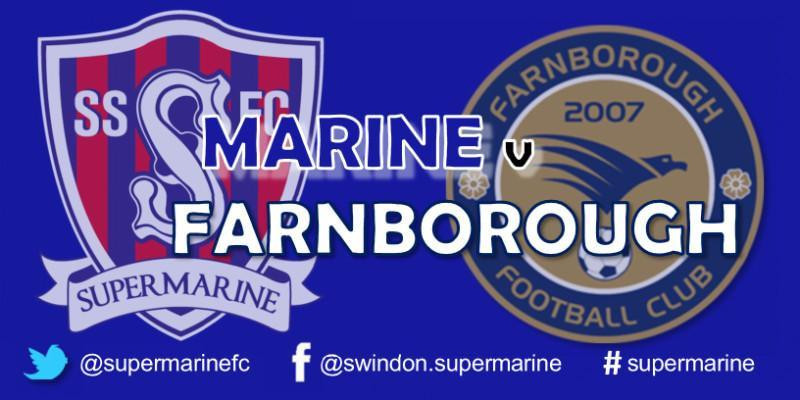 Swindon Supermarine are in action this Bank Holiday Monday 30th August, 3pm kick off as they take on highflying Farnborough at the Webbswood Stadium in a top of the table encounter. Farnborough boss Spencer Day has put together a strong side this season, full of experience and youth and will prove a tough test for Marine. The Boro currently sit in second place in the table with 10 points out a possible twelve and are unbeaten so far this season winning their last three games.

Goals have been coming from all parts of the team this season with vastly experienced 34-year-old Ricky Holmes (ex-Southend Utd, Sheff Utd, Charlton Athletic) recently drafted up top, whilst the gifted Nic Ciardini has returned to the club from neighbouring Hartley & Wintney and is once again playing well for the Boro. Farnborough are a club with massive potential, an EFL standard ground and it wouldn’t at all surprise anyone if they are in the mix come the end of the season.

At this early stage, two of the favoured teams in Hayes & Yeading and Farnborough find themselves sitting in 1st and 2nd respectively in the league standings, with the likes of Gosport Borough, Walton Casuals and Met Police all hovering just below ready to gather momentum. Meanwhile Marine’s 3-0 victory last week to basement boys Kings Langley heralded a return to form which they maintained with an excellent 2-1 victory at Wimborne Town on Saturday to push up to sixth in the table.

The last time the two sides met was the opening game of last season when Marine came back with three points after a 3-1 victory away with Harry Williams, Conor McDonagh and Zack Kotwica scoring. In fact Marine have won the last three encounters and are unbeaten at home against our opponents at home since 2009 but will be tested to limit to continue this run!

No injuries to report from Saturday’s match at Wimborne and it looks as though Pablo Haysham is the only who is returning to match fitness after injury. I expect to see manager Lee Spalding possibly ring the changes to keep the side fresh after Saturday, he certainly has the squad to do so. But he may also opt to stick with a winning side once more. It will be interesting to find out!

A win today for Marine would cement the promotion challenge against one of the best, we are hoping for a healthy crowd to cheer them on to victory. Gates will be open from 1pm along with the clubhouse bar and kitchen where we accept both cash or card payments.