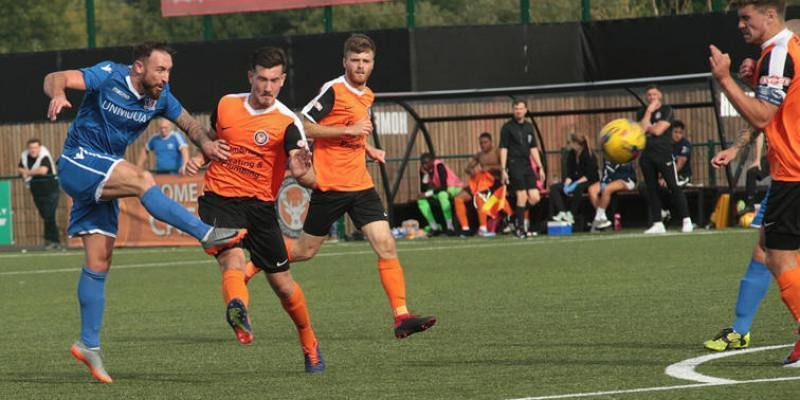 The love of the game and our teams. It makes us do some extreme and silly things at times. Saturday I dragged myself out of my sick bed, boarded the coach for London, sleeping the majority of the way there, only to see Supermarine capitulate in an abysmal 15 minute period before half-time where they were completely dominated and ripped apart. It wasn’t a proverbial game of two halves, more like four quarters. Marine dominated for three of them, but a sloppy second ‘quarter’ was enough to separate the sides.

The first 20 minutes of the game, ‘Marine looked bright as Josh Parsons crossed for Ryan Campbell who just couldn’t get enough on it to steer it home before a period of heavy pressure, forcing a number of corners without creating any real chances from them as Walton dealt with each one in the early onslaught. Walton had a couple of early chances themselves in the first ‘quarter’ as well when Tauren Roberts hit the side netting at the near post before Omari Hibbert somehow steered an effort straight at Josh Hill from only 5 yards out when he sneaked in between Matt Coupe and Zak Westlake.

Shortly after the half hour mark, the game tipped in favour of The Stags when Joe Hicks pounced on a blocked effort by Hibbert to fire high past Hill. Hibbert then doubled the lead when he collected a pass from Roberts as the ’Marine back four stood and watched and placed confidently low past Hill. It was as good as game over on the stroke of half-time when Hibbert scored his second after a quick one-touch build-up from Walton who were increasing in confidence every time they surged forward.

Boss Lee Spalding sent his troops out early after the break and they started out with that rocket underneath them and choice words ringing in their ears as straight from kick-off Conor McDonagh had a back post volley cleared off the line and from the clearance Luke Williams hit an excellent low volley that the Walton Keeper Denzel Gerrard did well to save at full-stretch.

Spalding rolled his dice early into the second half as Ryan Campbell and Josh Parsons were replaced by Joe Selman and Brad Gray. Gray twice went close shortly after his introduction when Brad Hooper burst down the right channel to cross for Gray who headed over. A minute later Gray was denied by the post as he hit a lovely effort from 20 yards that beat the keeper but bounced back and was cleared to safety.

‘Marine were dominating possession, with Selman working hard down the right to create chances, but it just wasn’t opening up for the away side. With seventeen minutes remaining the Walton wall finally crumbled. McDonagh tucked in at the far post from a fine Stuart Fleetwood cross.

With Swindon continuing to pour forward, The Casuals were denied by a fantastic last ditch Coupe slide tackle, before Isaac Sarpong unbelievably missed a tap in from a yard out at the back post, somehow stumbling and putting his effort into the side netting.

Williams missed the target when he volleyed over the bar from 14 yards as subs Gray and Selman opened up the right hand side of the back four. Selman then fired over and wide as the additional minutes ticked past and that was it. Walton won their first league match of the season and ’Marine lost their first game on the road this season.

Spalding will look to utilise his squad when the team face unbeaten Yate Town in the Southern League, League cup this coming Tuesday at the Webbswood, before selecting a team to try and beat former Supermarine Manager, Mark Collier’s Chippenham Town of the Conference South in the FA Cup next Saturday at Hardenhuish Park.