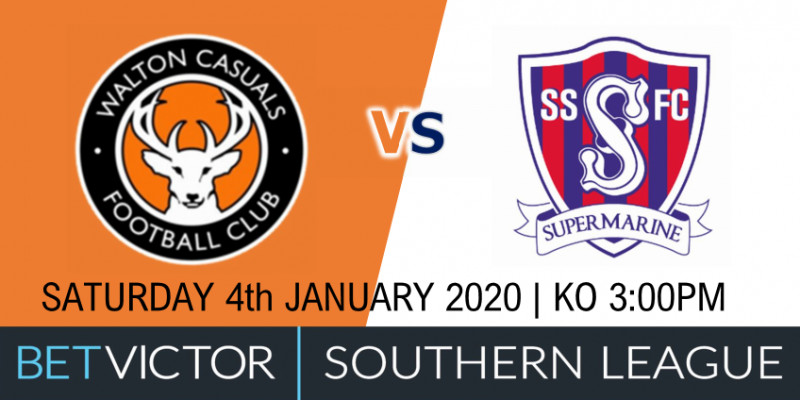 Proven Football League goalscorer Rene Howe will pose a huge threat to Swindon Supermarine this weekend when Lee Spalding’s side make the trip to Walton-on-Thames. Between 2007 and 2015, the 33-year-old forward completed spells at Peterborough, Rochdale, Lincoln, Bristol Rovers, Burton Albion and Newport among several others. Howe promptly made his return by signing with Kettering Town before joining Hendon Town and Kings Langley on his way to penning a deal with Walton Casuals in the summer.

Walton’s league this term has mirrored their efforts of last season, where they ended the year in 17th. Sitting in the same position with 24 games under their belt, it would be easy to presume that Spalding’s troops should expect to add to their impressive seasonal points tally this weekend. But nullifying Howe’s threat must be prioritised before any thoughts are placed on pressing the Surrey outfit at the other end of the pitch.

Spalding said: “When we played them last season at their place they gave us a real footballing lesson. “They were a good side, and at the start of this season at home we had to rely on two very late goals secure a 3-2 win on the opening day of the season. But have made a lot of changes as this season has gone season, but the same threats apply – it’s not easy to play on a 3G pitch when they play good football.

“They like to play out from the back and have good players. Rene Howe up front can be handful, so we’re anticipating another tricky day even though they aren’t in the best of form. “They will be keen to gather every point possible at home, and they will want to prove they are worthy of a place in the league.”

Marine started the New Year in frustrating circumstances on Wednesday as visiting Merthyr Town snatched a last minute goal to restrict the Webbswood Stadium outfit to just a point. Nonetheless, the club sits fourth in the Southern Premier Division – eight points short of table topping Tiverton Town with two games in hand. A positive first half of the year can be built on, providing players’ mentality levels remain in the right place.

“Our mentality has got to be right, we must ensure we do things that we have been doing right – that’s work rate and making sure our shape is strong,” said Spalding. “They have weaknesses, they’re conceding a lot of goals. And it’s down to us to exploit that and make sure we are solid. “Hopefully we can pick up a clean sheet and a win.”

All the players are fit and raring to go, with Matt Coupe returning from a winter break and with the addition of a new permanent signing if the paperwork is completed in time, Marine will be at full strength tomorrow afternoon.