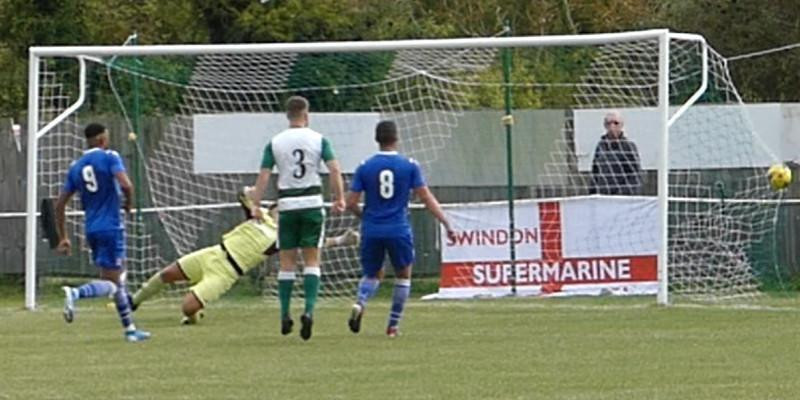 Lee Spalding was forced into two of his three changes with Joe Shepherd replacing Michael Hopkins (hamstring), Calvin Dinsley coming in for Ryan Campbell (foot injury) and Kane Simpson got the nod ahead of Fleetwood who was rested.

On a bumpy surface the visitors had the lead in the first minute when Liddiard finished off a flowing team move nodding in Edge’s cross from six-yards out. There was little looking back from that point out as The Freds rarely troubled visiting keeper Martin Horsell.

Henry Spalding should have opened his account for the season, but saw his header go straight at Charlie McCready and the keeper was alert to deny Conor McDonagh from Henry Spalding’s through ball. Simpson then volleyed over when well placed as the away side looked to build on their early lead.

McDonagh and Simpson then both saw further efforts miss the target, but the next effort that was on target, was an expertly taken free kick by Edge that nestled right into the top corner! Not a bad way to open your scoring account for the club.

The second half Marine continued to dominate possession, but the only disappointment for the management team would be the lack of clear cut chances created. Simpson dragged an effort wide of the post with a flick between his legs and defender Matt Williams saw an effort cleared off the line, his second in three games and the game was sealed when another of Spalding’s subs finished the game off when Fleetwood curled home expertly from the corner of the box after Henry Spalding’s deft touch through his legs played him in from Edge’s forward pass.

Fellow substitute Brad Gray almost made it four as he went for a lob from the opposite corner of the box, but saw his looping effort fall just short and wide of the near post

Lee Spalding was delighted to get back to winning ways after his side comfortably saw off Wantage Town in the FA Cup First Qualifying Round on Saturday. Victory was the only priority for Spalding’s Supermarine side, who had gone four games without a win, and booking their place in the next round of the FA Cup.

Spalding felt the 3-0 win at Wantage was a comfortable day at the office for his side and hopes it gives the players a confidence boost ahead of games against Larkhall Athletic (Tuesday night) and Taunton Town (Saturday).

“It is about progressing to the next round,” said Spalding. “To be honest I didn’t feel like we were ever under any pressure. We dealt with everything really well. “Overall we dominated the game and created the most chances. Probably could have been a bit more free flowing at times but to be fair the pitch wasn’t the slickest. “I’m happy with the performance and happy with the result.

“The start of the season has been tough when you look at the run of fixtures we have had. We have done well, we have competed well. We’ve shown we are more than a match for the teams that are going to be up there. With the group we have got, we are more than capable of getting results.”