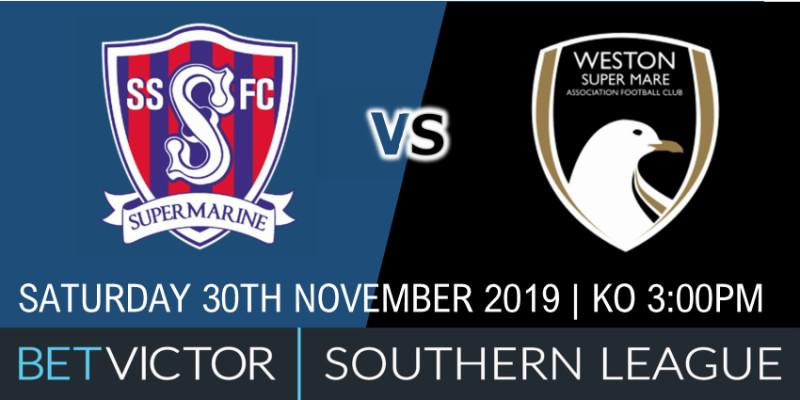 With ambitions to win promotion to National League South in the next couple of seasons, manager Lee Spalding expects nothing less than a credible performance by his players when Weston-super-Mare visit the Webbswood Stadium tomorrow.

Weston suffered their first ever relegation last year when finishing bottom of the National League South table having accumulated only 35 points from 42 fixtures. It ended the Seagulls’ 15-year stay in non-league’s second tier, but the club acted quickly to recruit Scott Bartlett, formerly of Forest Green Rovers, as manager.

Bartlett’s opening months at the Optima Stadium have been far from cosy, with the club languishing down the table in 11th with five wins, drawn five and lost five. But with a decent budget behind them, Supermarine chief Spalding admits his players must be on their guard defensively if a fourth clean sheet in a row is to be recorded.

He said: “Weston will be disappointed by their current position in the table, particularly with the players they have at the club. “They’ve got a decent budget, and their expectation was to go straight back up. We expect it to be a tough game. “I’ve watched clips of them, and I’m confident if we perform on the day, we can get what will be a vital win.”

Former Cheltenham Town player Matt Williams could be involved in the squad this weekend having been absent for 10 weeks through injury. The defender has returned to full-time training, and Spalding is hopeful the ex-Gloucester City man can add some strength in depth to Marine’s squad, something Weston will possess in abundance. The only absentee to select from should be defender Simon Downer who is still troubled by a groin injury.

A new addition to the squad will be winger Alex Henshall who has joined Marine on a month’s loan from Nuneaton Borough. Alex is a local lad that started his playing career at Swindon Town before turning down Man Utd and Liverpool to join Man City as a 16-year-old and has gone to play for Chesterfield, for whom he made his Football League debut, Bristol Rovers and Ipswich Town before signing a permanent contract with Ipswich in 2014.

A loan to Blackpool preceded a couple of months with Scottish Premiership club Kilmarnock in 2016. He then left Ipswich and played non-league football with Margate, Braintree Town, Nuneaton Town and Darlington before returning to Nuneaton in 2019 and now a month’s loan at Swindon Supermarine. The only absentee from the squad is defender Simon Downer who is still troubled by a groin strain.

Spalding added: “Looking at the teams in the division at the start of the year, Weston would be a team you’d expect to be up there. “They’re a big club, and expectation around the club will be high. I know Scott Bartlett. He has taken that job on with a view of getting them straight back up into National League South. We expect nothing other than a very tough game.

“There’s quality right through their squad, but we have that also. It’s our aim to get into National League South in the next couple of seasons, and I’m confident we’ll give Weston a good game with the squad we’ve got.”