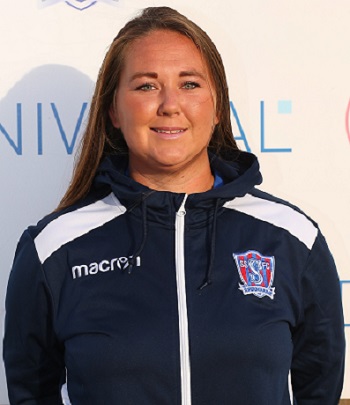 Profile: Polly is currently still playing for Swindon Town Women who are in the FAWNL Division 1 South West. Over her career she has played at many levels. One being with Reading Academy from U14s-U16s which she then went on to move into their Women’s team.

At 17yrs she then moved to London to play with Chelsea well studying at Kingston College which opened the door for her to then represent her county for England Colleges for two seasons, her highlight was being made their captain and coming third in the Gothia Cup.

From this she was scouted to go on a scholarship to USA which lead Polly to studying and play soccer in Hutchinson Kansas, Oklahoma Wesleyan University. Along with also playing summer league soccer with Georgia Revolution FC reaching many achievements from League titles, Championship titles, 2nd team all-American player four times and summer tournaments along the way.

After achieving her degree in Exercise Science Polly continued to stay in the States to follow her second passion in coaching with UKIS this gave her the opportunity to travel and coach all across the West Coast of America.

After spending ten years in the USA she returned home, where she was selected to help UKIS with their recruitment team for giving young coaches the chance to have a great experience in coaching aboard.

Other Sponsorship is available for Polly