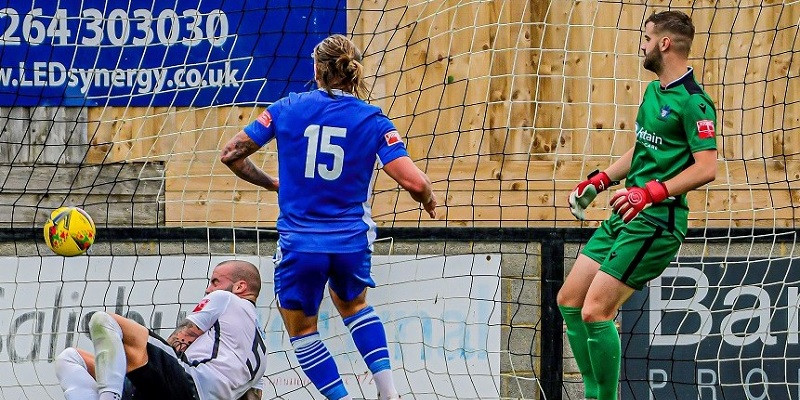 Swindon Supermarine have an exciting double header weekend as they travel to Salisbury on Saturday in the Wiltshire Derby before hosting Merthyr Town at home on Bank Holiday Monday at 3pm.

With Marine in third place with three wins out of four they will be eager to cash in against their local rivals who have endured a mixed start under Steve Claridge, winning two and losing two games. It is a similar story against the Welsh side on Monday as the recently reprieved team have made an identical start as Salisbury.

It is always tricky in a local derby and Saturday will be no exception with the form book normally going out of the window. The Whites are back on track after a superb 4-0 win at Yate last weekend. New recruit Brandon Goodship is the man to watch out for with four goals already this campaign. Marine lost 4-2 at the Ray Mac last season with Conor McDonagh (pictured above) and Zack Kotwica netting, but we did win in a League Cup tie 3-1 with Tyrone Duffus among the scorers. The last meeting was at the Webbswood Stadium where we achieved a hard fought a 2-1 victory thanks to goals from Ryan Campbell and Harry Williams.

On Monday the Martyrs are in town under the stewardship of new manager this season Paul Michael. They are on a run of two wins having beaten Tiverton Town at home and then Plymouth Parkway on the road, Ricardo Rees being the main man on each occasion, scoring three goals for the season. They will visit Monday having entertained Poole Town on the Saturday.

Marine beat Merthyr on both occasions last season 2-0 at home with Ryan Campbell and Conor McDonagh netting, and 3-1 away late on in the season with Henry Spalding, Ryan Campbell and Kevin Phillips with the goals.

Manager Lee Spalding had this to say: “We have a few players carrying knocks from last Saturdays game and they have been with the physio this evening (Thursday) getting treatment and being assessed for the weekend. Two big games, both will be tough challenges. Both sides have started the season well and we will need to be at our best to get anything from either game. Salisbury have got forwards that will cause any team in the league problems so we must be fully focussed and stay switched on for the full 90 minutes plus. If we do that then we certainly look a threat going forward, our attacking play has been really good at times and we have created a lot of chances and Harry Williams, James Harding and Conor McDonagh will be looking to add to their goal tally this weekend as the team must continue to work hard and look to take points from both games!“