Swindon Supermarine Football Club are pleased to announce the signing of striker Kieran Philips on an initial month’s loan from League Two side Bristol Rovers. 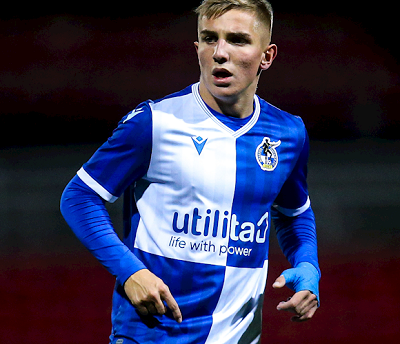 Kieran, a 19-year-old striker, arrives at Marine on a one-month loan deal and will be in the squad that travels on Saturday to Tiverton Town for our FA Trophy cup tie. He signed his first professional contract in February 2020 and made his professional debut on October 6th 2020 as a substitute in a 1–1 EFL Trophy draw away to Oxford United winning a late penalty.

Last season Kieran was on loan at Chippenham Town from October 2020 until January 2021. He made his debut as a late substitute in a 1-0 win over Braintree Town. This season, he had a loan spell at fellow Premier Division South side Dorchester Town. He made his debut the following day after signing and scored both goals in a 2-0 victory over Walton Casuals.

Manager Lee Spalding will officially welcome Kieran to the club this evening at training and is very pleased to have the striker available for Saturday’s tough match at Tiverton. He told the Marine website, I am hoping Kieran settles in quickly and of course scores a few goals during his time with us, but also his presence and enthusiasm helps his new teammates rediscover their best form by bringing further competition for places.

We have created several good chances in each of our last few games, but as we all know we have not taken a number of these chances. We have dropped from a playoff place to sixteenth position after these past nine games without a league win and we must reverse this run of results.

Welcome to Marine Kieran, we hope your stay with us is an enjoyable one.