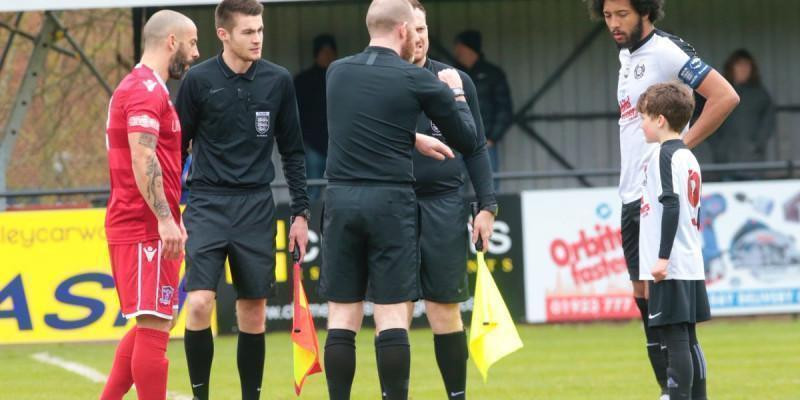 by Brian Davis with a Grand National theme (Media & Press Officer)
Lee Spalding changed his team to a 4-3-3 formation as he set out to Go Conquer the Pleasant Company of Kings Langley on Grand National Day. Playing on a narrower pitch the Supermarine manager decided to play with what looked like one of the strongest midfield’s in the division in Calvin Dinsley, Jamie Edge and the returning Mat Liddiard as Henry Spalding and Ryan Campbell dropped to the bench.

Both teams were quick out of the gate, chomping at the bit and went Blow By Blow as Marine had the ball in the net after seven minutes only to see them denied by the assistant Referee’s flag as Harry Williams, making his first start for the club came back from the goal line to knock home Conor McDonagh’s header. The decision would not be Up For Review or require any Jury Duty to resolve. 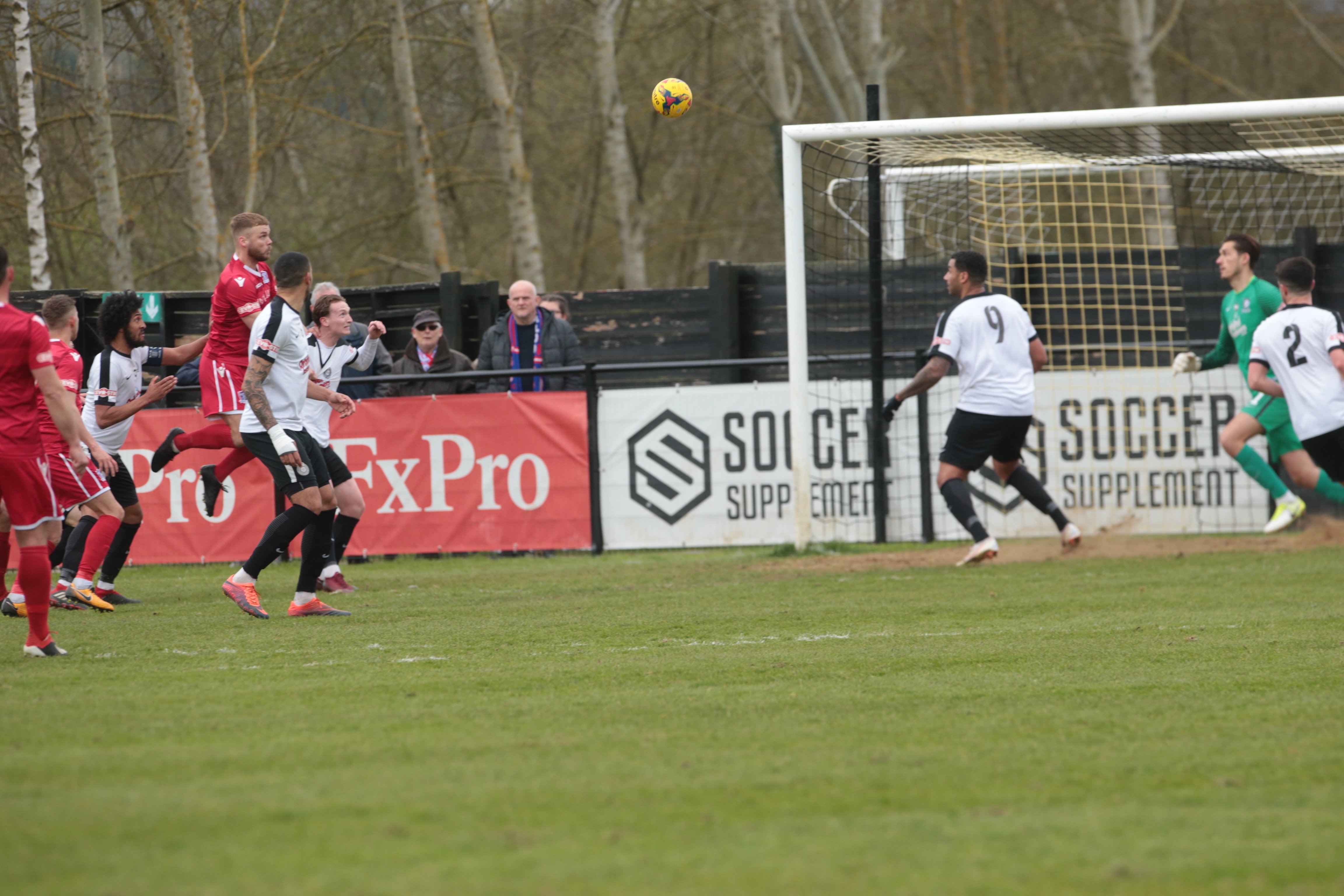 Under the Vintage Clouds of the Hertfordshire sky the away side took the lead when Jamie Edge swung over a freekick which Matt Williams jumped highest to power his header downwards and despite goalkeeper Alex Tokarczyk getting his hands to the ball he couldn’t keep it out of the net.

Rene Howe saw a glancing header miss the target and Andronicos Georgoiu had a deflected effort which Josh Hill saved ahead of Stuart Fleetwood volleying over the bar as the game flowed from end-to-end. 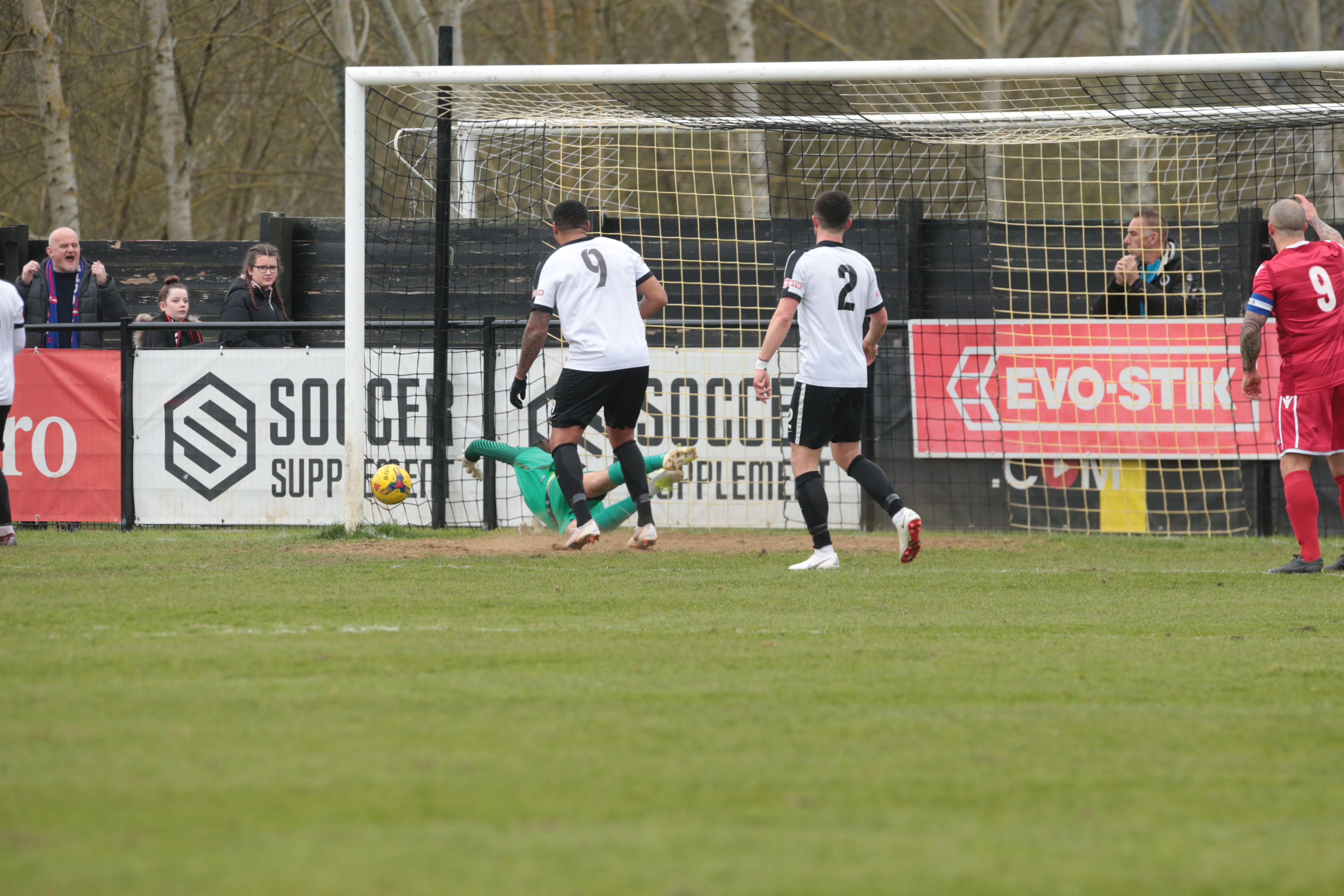 It was nearly a Regal Encore for Williams who then saw another header from another Edge corner hit the post and Fleetwood made a great turn in the box, but could only steer his low effort straight at Tokarczyk.

Marine started the second half brightly and the threat was down the left hand side again as the industrious Calvin Dinsley and Michael Hopkins created a great opening for Fleetwood but just as he was about to pull the trigger, the ball was taken off his toes and it wouldn’t be long before it was looking like it wouldn’t be Just A Par for the away side as McDonagh and Hopkins showed plenty of Noble Endeavour, again down the left and McDonagh’s cross was turned in at the far post by midfield thoroughbred Mat Liddiard to make it 2-0. Just before Marine took the lead, Langley forced a succession of corners, but resolute defending and good goalkeeping from Hill kept them at bay.

It was almost 3-0 a minute later when the left hand side proved fruitful once again with Hopkins and McDonagh once again linking up, but Dinsley could only volley wide. Georgiou created space for himself, but his effort curled wide of Hill’s far post as McDonagh’s glancing header was comfortable for Tokarczyk. 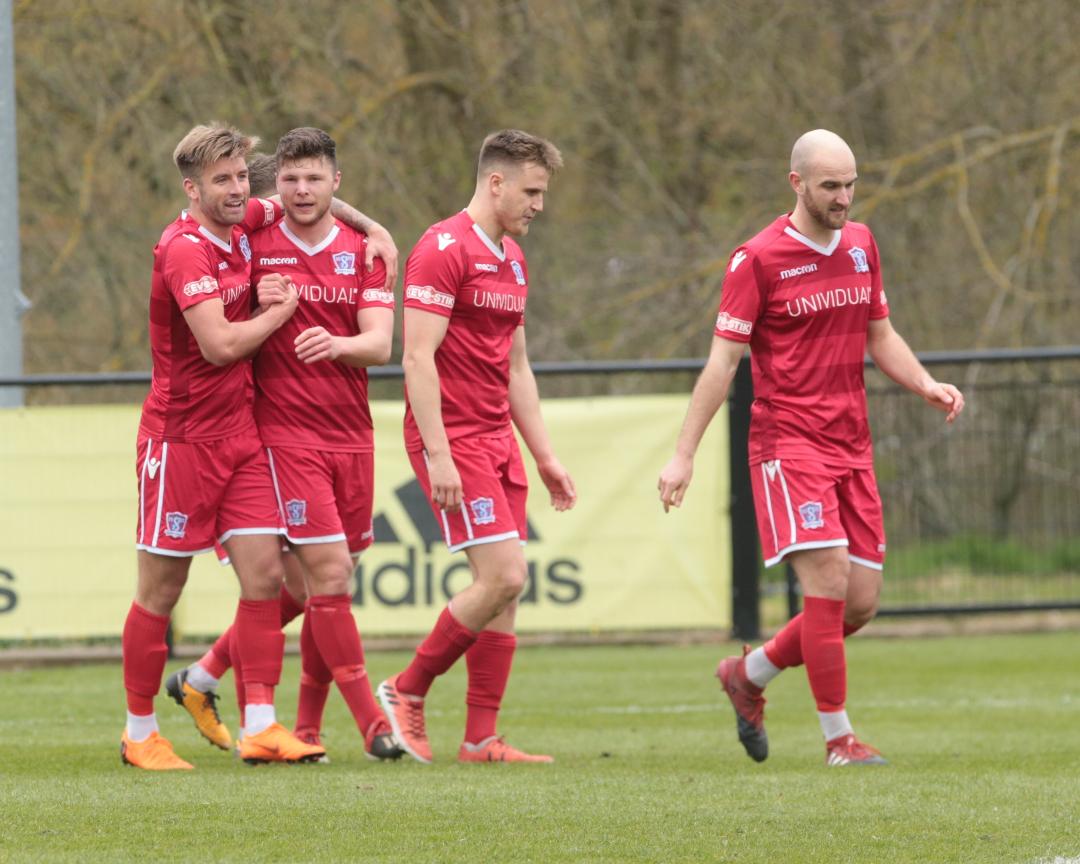 It wasn’t a Walk In the Mill though for Supermarine as Rene Howe found himself with Time For Tea in the centre of the box to control the ball for Jacob Cook to fire home causing the Supermarine fans to Step Back from telling their Warriors Tale too soon, but the General Principle of closing a game out and controlling the pace was managed excellently by Spalding’s men.

Marine now have the Magic of Light of 10 places above the relegation zone in 9th place and are almost certainly guaranteed Southern League Premier South Football next season sitting 11 points from the drop and 9 off the playoffs with four games remaining, they will look to keep their home Tiger Roll going and Rock The Kasbah next Saturday as they host Met Police at The Webbswood.

Match highlights from the excellent result at Kings Langley