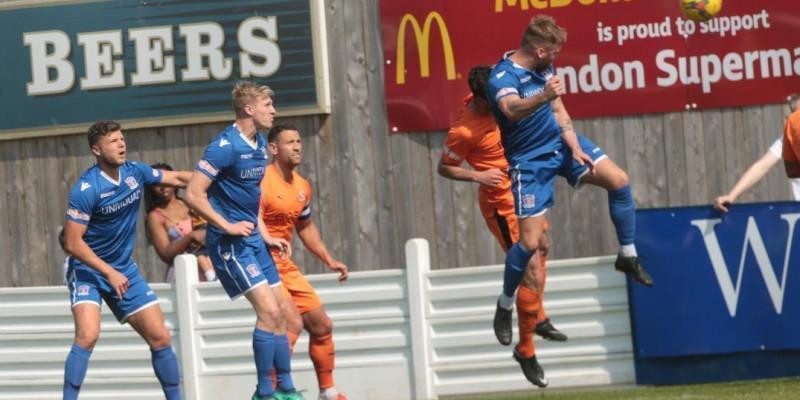 by Brian Davis (Media & Press Officer)
Supermarine brought the curtain down on their home season with a 1-1 draw with Hampshire’s Hartley & Wintney as a Matt Williams header cancelled out an early Jack Ball strike. The game was barely a minute old when the away side had the lead when Ball tapped home from Zapata Montes’s cross, despite vocal protestations from the home side about a foul on Joe Shepherd in the build-up which left Ball unmarked at the far post. 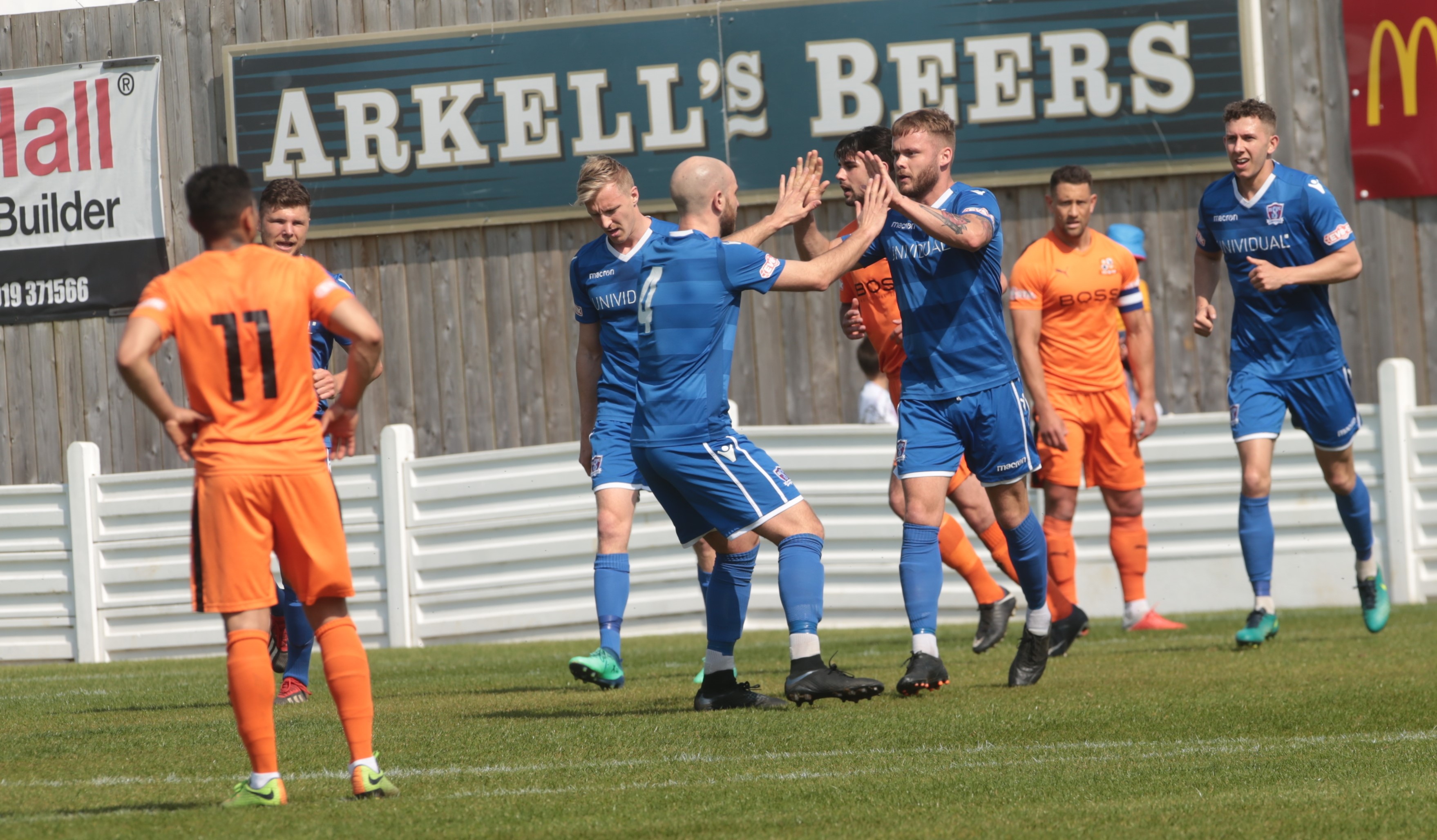 The led didn’t last long though as Stuart Norman saved well from Henry Spalding to conceded a corner and from Spalding’s flag kick delivery, Williams rose highest to score his 4th goal of the season.

The same combination almost made it 2-1 when Spalding sent over another excellent set-piece and as Williams slid in at the back, he couldn’t quite divert the ball the right side of the post. Norman then made another fine save to deny Spalding’s volley. 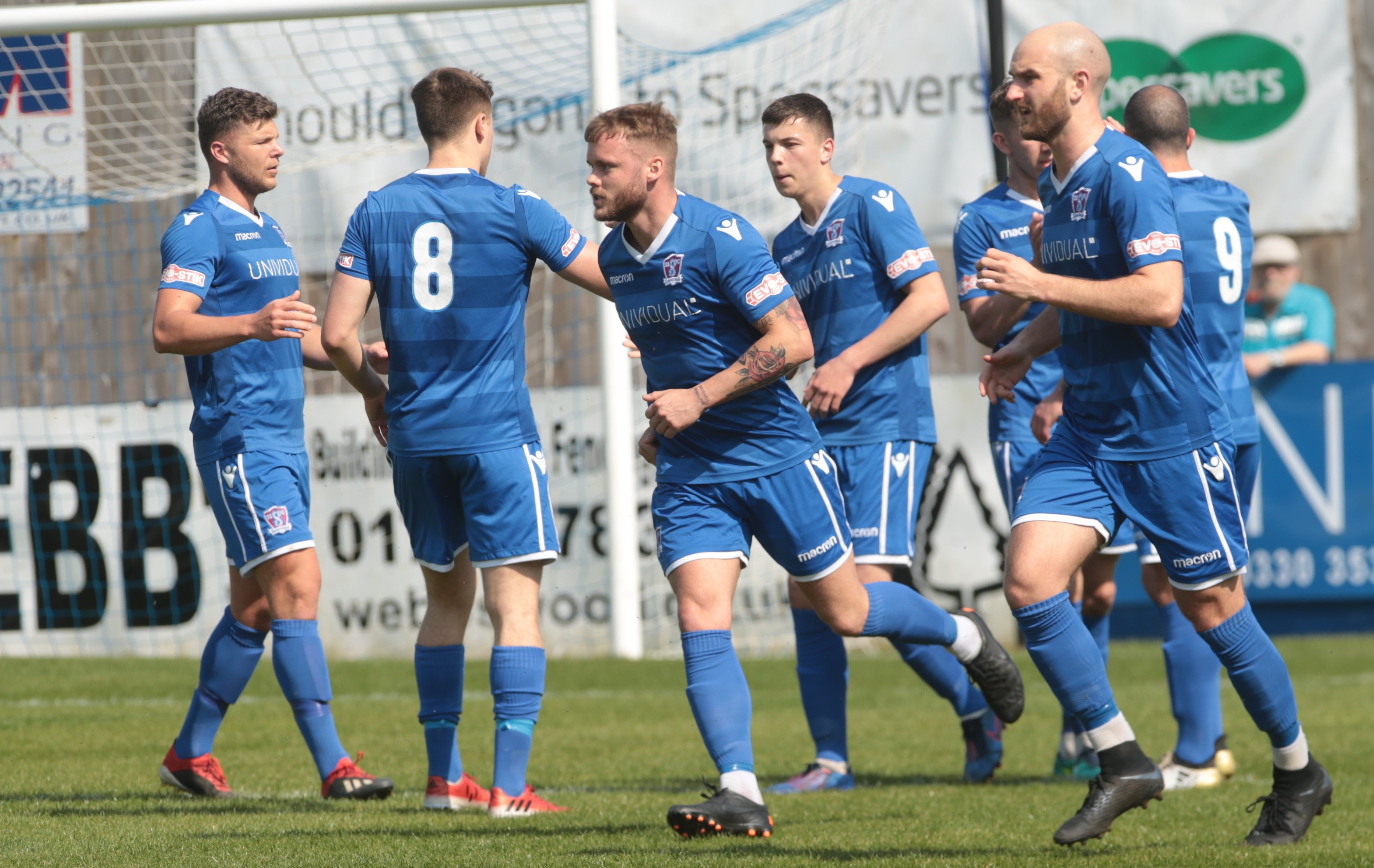 Josh Webb had the visitors next chance but his effort deflected over the bar and from the resulting corner, former Cirencester centre half Albert Alexandru blasted an effort goal bound that Shepherd saved from a certain goal with his face.

Williams could have had a first half hat trick, but following another Spalding corner, his header went over the bar. The Row quickly countered downfield and it was Alexandru again who had a chance at the far post but his volley also went over the bar in a first half dominated by both centre halves.

Norman then made an excellent save parrying away Stuart Fleetwood’s effort and in keeping with the theme of the day, Mat Liddiard headed wide from the resulting corner!

Lee Spalding’s side missed a quilt edged chance when Calvin Dinsley played a slide rule pass through to Fleetwood who with the goal at his mercy, squared the ball for Harry Williams when he could have had a shot and the pass just went ahead of the young striker and out for a goal kick. It was a very similar chance that the pair combined for in Williams’ debut against Beaconsfield when Williams could have had the shot, but squared for Fleetwood to roll home. 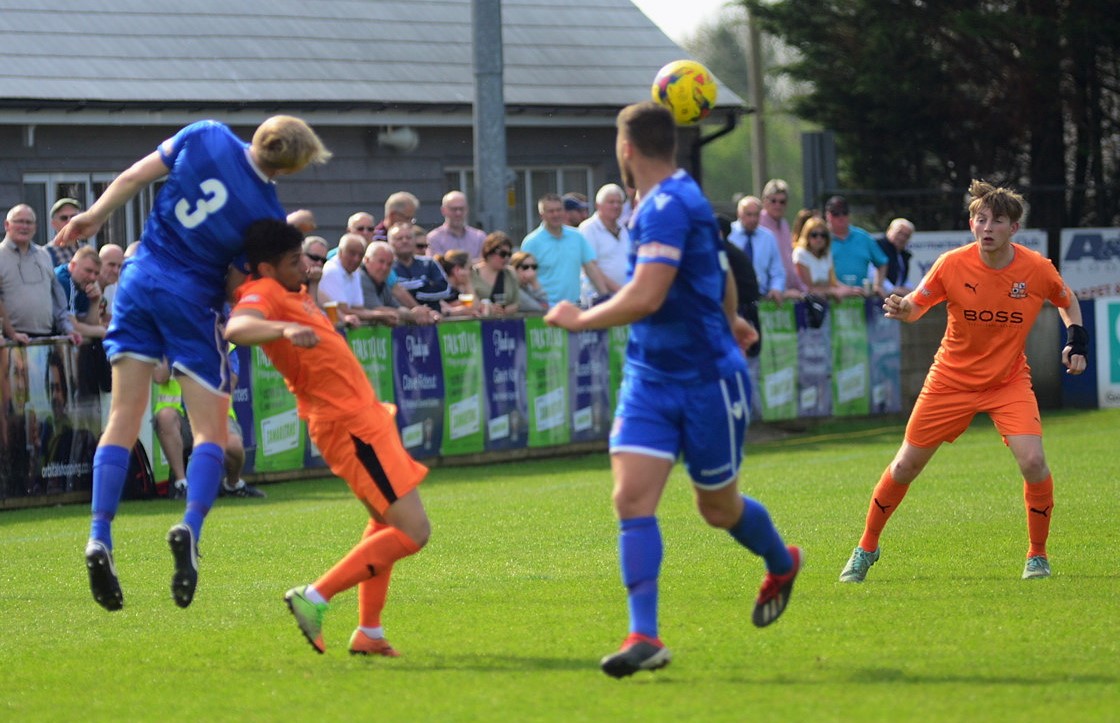 Webb tried his luck from distance but failed to make Martin Horsell work before Liddiard somehow volleyed over from six yards from Jamie Edge’s excellent corner which Norman completely misjudged. Harry Williams volleyed over from Fleetwood’s knock down and Marley Ridge completely fluffed his lines in front of goal with the away sides best chance of the half. 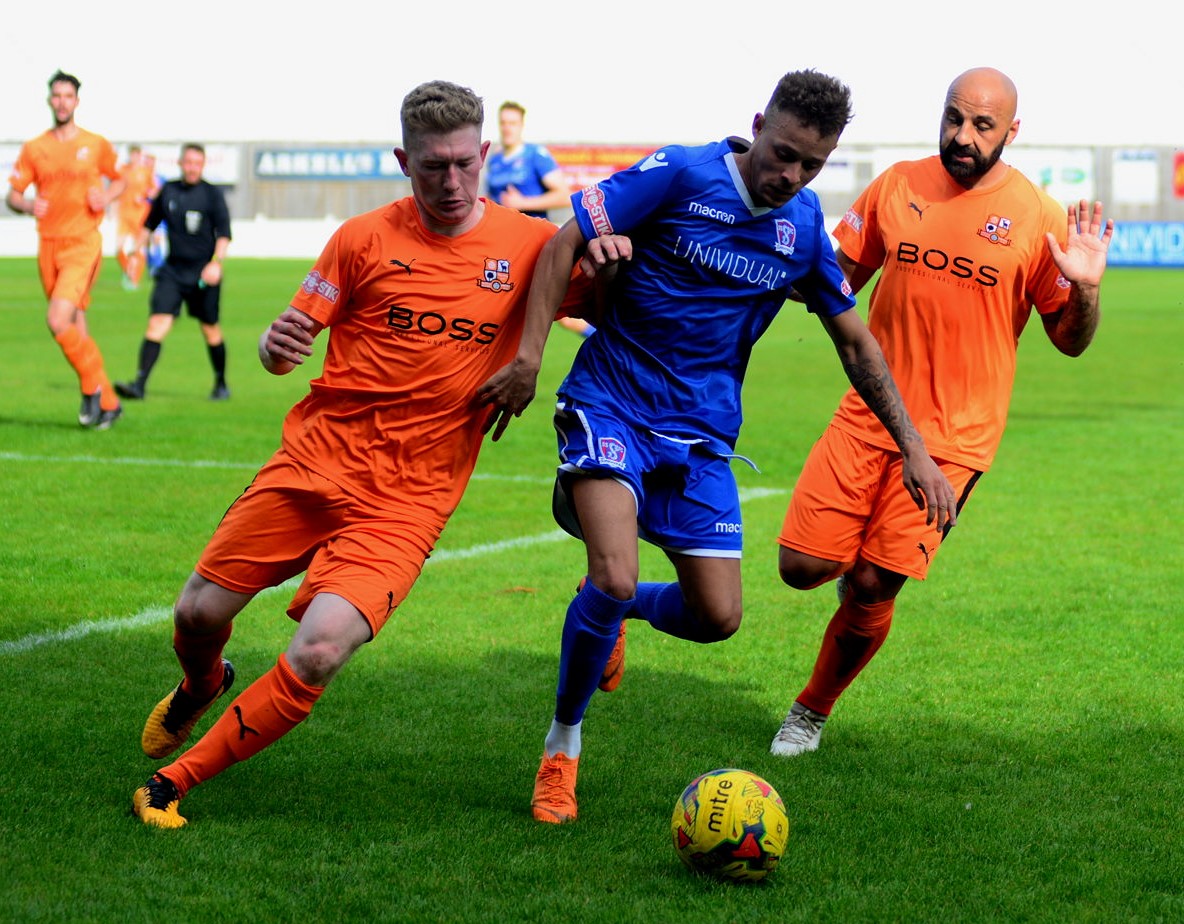 Supermarine finish their season with a trip to North London this Saturday as they take on a Hendon side who will be desperate to get something from the game to avoid relegation. The bus departs the Webbswood Stadium at 11am and supporters can reserve a spot for £10 by emailing Keith.

It was a game of missed opportunities on which Manager Lee Spalding commented: “I thought we were a bit sleepy in the first five minutes, we weren’t the quickest out the blocks, but after that I thought we dominated.” “We created a lot of good chances and we were the better team – we could have won three or four if we were that little bit more clinical in front of goal.”

“That was my only gripe today, that we didn’t take our chances, but it was a much-improved performance from the weekend, and I’m delighted with how the players have gone about it.” Looking ahead to next season, Spalding hopes they can start next season as well as they have finished this at the Webbswood Stadium. He said: “I think we’ve improved at home as the season has gone on.”

“At the start of the season, I thought we struggled a bit with our home form, but I definitely think we’ve improved.” “The better the pitch is, the better that suits us in terms of how we want to play and the new squad of players that we’ve got are growing into our home ground.” “We’re making it a place where it’s hard to come here and beat us, which is what we need if we’re going to achieve anything next season.”