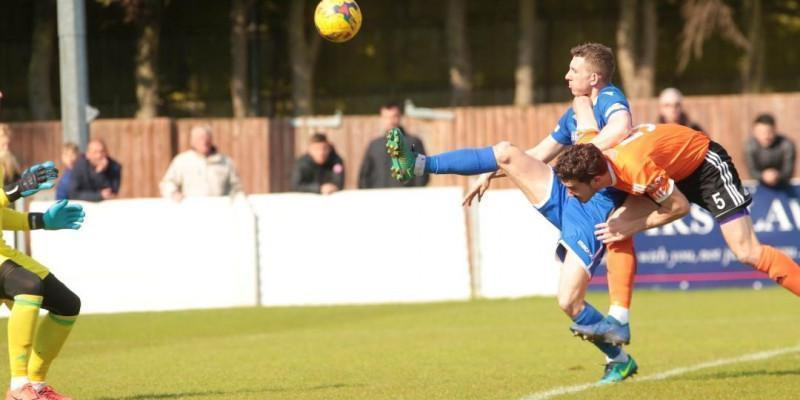 by Brian Davis (Media & Press Officer)
Swindon Supermarine’s superb first season back at the Southern Premier level continued Saturday when they completed the double over Met Police at the Webbswood Stadium. Manager Lee Spalding decided to keep with the exact same 16 that won away at Kings Langley including the 4-3-3 formation which was so effective in Hertfordshire which proved excellent once again on the more open spaces of their home ground. 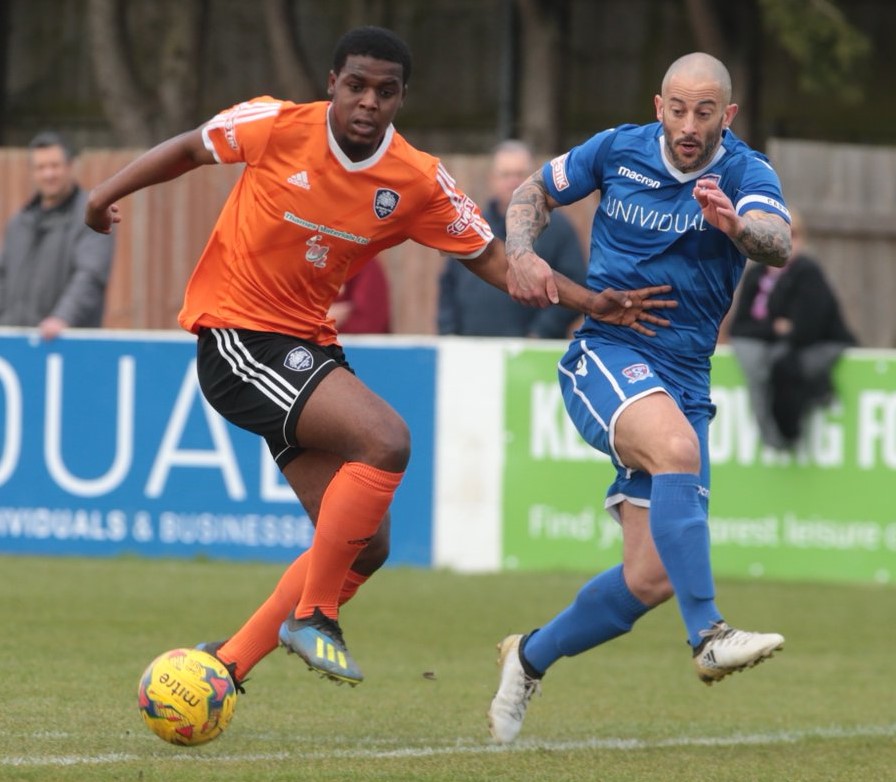 Stuart Fleetwood battles for the ball in the first half

Met Police were missing their top scorer Jack Mazzone and his replacement Bayley Mummery limped off in pre-game warmups forcing Met Police to rejig their plans once again. The promotion chasing visitors started fast and had early chances when Ethan Chislett hit wide, Jonathan Hippolyte’s deflected low effort was saved by Josh Hill and another effort was cleared off the line in a scramble from a corner. 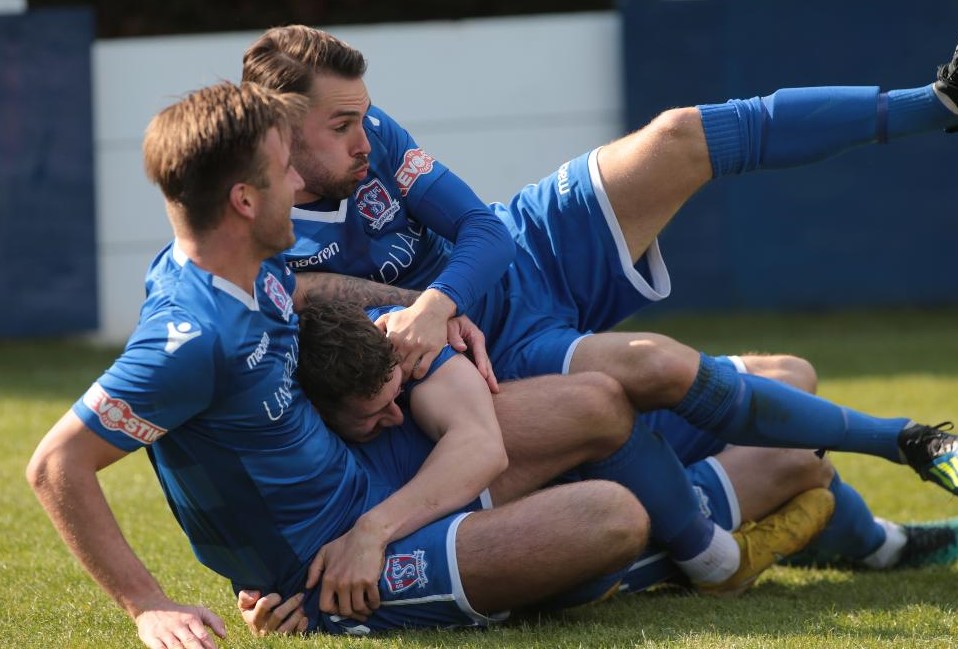 The large majority of the first half was a midfield battle with few chances for either side, with the main talking point being a nasty clash of heads between Calvin Dinsley and Luke Robertson which caused Dinsley to receive lengthy treatment including an early change of shirt due to the blood. Stuart Fleetwood had two chances before the half but saw his first effort blocked and his second from distance saved by Berti Schotterl.

Marine made a flying start to the second half when Harry Williams got between the Police back four and lobbed Schotterl to score his first goal for the club from a fine Conor McDonagh through ball. Calvin Dinsley, bloodied after an early clash of heads personified the spirit of the home side after receiving three lots of treatment to his head to run the game from the middle of the park with Jamie Edge and Mat Liddiard. 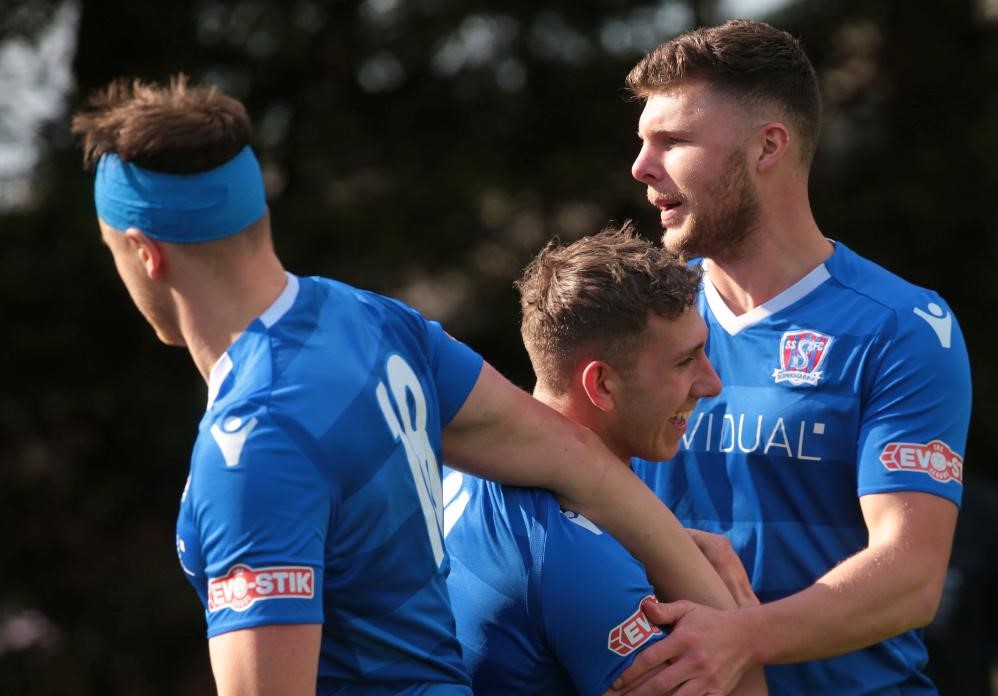 Michael Hopkins cleared a deflected effort off the line but it was Marine who had the better of all the second half chances as McDonagh put an effort just wide after great play down the right from Fleetwood. Substitute Bradley Gray curled just wide following more excellent play down the right hand side from Dinsley and Mat Liddiard. Then Stuart Fleetwood was denied by the inside of the post late on as he took a touch from McDonagh’s cross but with Schotterl beaten saw the ball fall to safety off the woodwork.

Whilst an outside shot of the Playoffs this season is still possible, Spalding is focusing on next season. He said: “We scored a good goal and had two or three chances after to extend our lead, but overall, it was a really good win against a team that were second in the league.” “Defensively, we were very strong and to beat a team as strong as Met Police is a great result.” “It’s important that we finish the season well as we’ve brought a lot of new players in and with the quality that we’ve got at the club now, we’ve got a really strong squad.” “We’re pointing in the right direction ahead of next season and we’re having a very positive end to the season and hopefully we can kick on next season.”

Spalding admitted the win against Met Police was far from vintage, but insisted that it is important for his team to be able to grind out results in future if they are to achieve their ambition of reaching National League South next term. He said: “We started the game okay, but it was a real battle in the first half. We gave a good account of ourselves defensively, but we didn’t played what I would call free-flowing football. We didn’t really get the ball down and play like we can, but I thought we dug in well against a good side who were quite direct.” “I thought Met Police were going to pass the ball around a lot more than they did.” “In the second half, we were a lot brighter. The message was to get the ball down and start playing it around a bit more, and we did.”