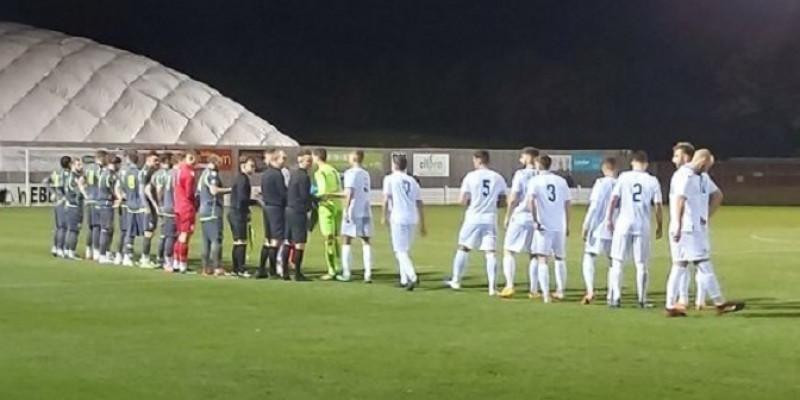 by Brian Davis(Media & Press Officer)
Marine were dumped out of the FA Trophy on Tuesday night as Thatcham Town ran riot at the Webbswood Stadium, bagging a 1-4 victory. Lee Spalding’s men were undone by a clinical and confidence-rich Thatcham, who made light work of translating their eye-catching league form into cup success.

Despite winning an early corner, Marine were quickly a goal behind as former Marine player and Thatcham striker Kyle Tooze who scored from the visitors’ strong counter-attacking move. Ryan Campbell could count himself unlucky minutes later. After linking up well with proven goalscorer Conor McDonagh, the winger crashed his curling effort against the post.

Just at Marine appeared to have established a foothold in the game, they saw their deficit double. Again on the counter, Thatcham had James Tennant to thank as his 18-yard effort defeat home ’keeper Martin Horsell. It got worse for Marine before the half-hour marked ticked by.

Felipe Barcelos’ deflected effort from 20-yards out fortuitously found its way into the back of Horsell’s net – the Southern Division One South pace-setters at this stage led by three goals and it was soon four.

Tooze again placed himself well inside the penalty area before squeezing his shot beyond Horsell’s far post reach. The visitors were unlucky not to make it five before the stroke of half time – Tennant’s decision to flick on a cross was perhaps the wrong call with better options available in hindsight.

On loan Swindon Town goalkeeper Archie Matthews had to make a couple of saves at the start of the second half, and he was eventually beaten with 65 minutes played when McDonagh pounced on the teenager’s mistake to cut the deficit to three. For Marine, that was as good as it got.

Thatcham comfortably closed out the game to prematurely dump Lee Spalding’s side out of the competition.