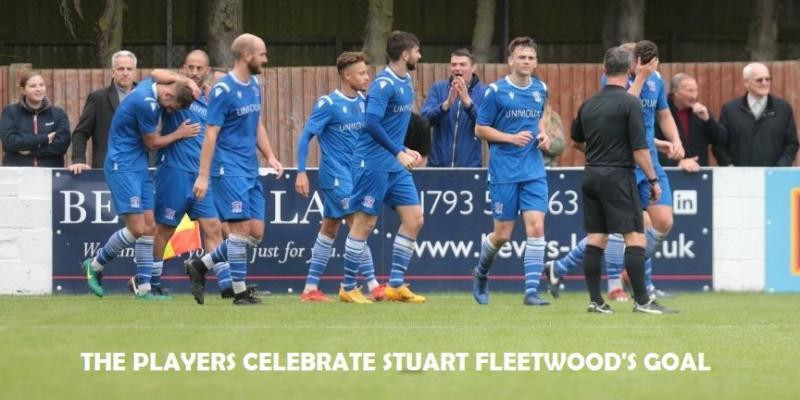 by Brian Davis(Media & Press Officer)
A superb team performance from a Supermarine side down to the bare bones saw them take a thoroughly deserved and hard-earned three points at the Webbswood Saturday afternoon as goals from Brad Hooper and Stuart Fleetwood were enough to see off second placed Chesham United despite their injury time goal causing a scare for the home side. 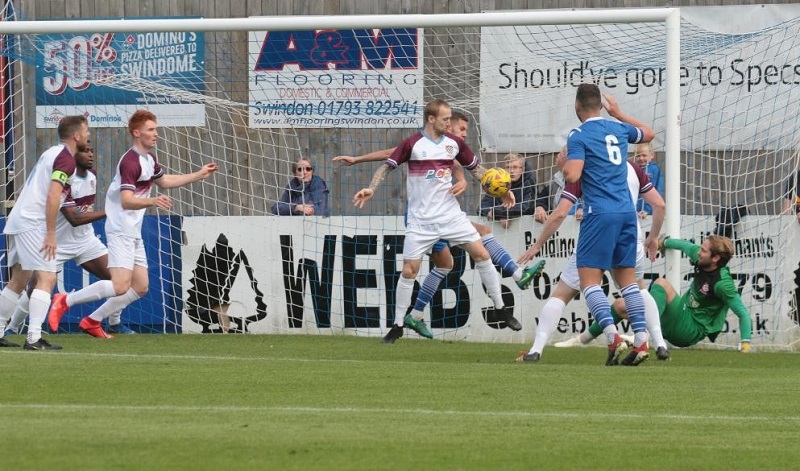 With Matt Williams, Michael Hopkins, Calvin Dinsley and Simon Downer all still injured, Manager Lee Spalding was forced into shuffling his pack, selecting Brad Gray at right back, whilst Matt Coupe once again stood in at centre half and Brad Hooper recalled into midfield.

The game’s first incident came as early as the third minute when Jamie Edge sent over a corner which Mat Liddiard headed goalward only to see his effort saved onto the bar by Jonathon North, however, as the ball dropped down and Harry Williams looked set to knock it home, left back Kyle Watson handled the ball on the line and after some initial confusion, the referee pointed to the spot for a penalty. 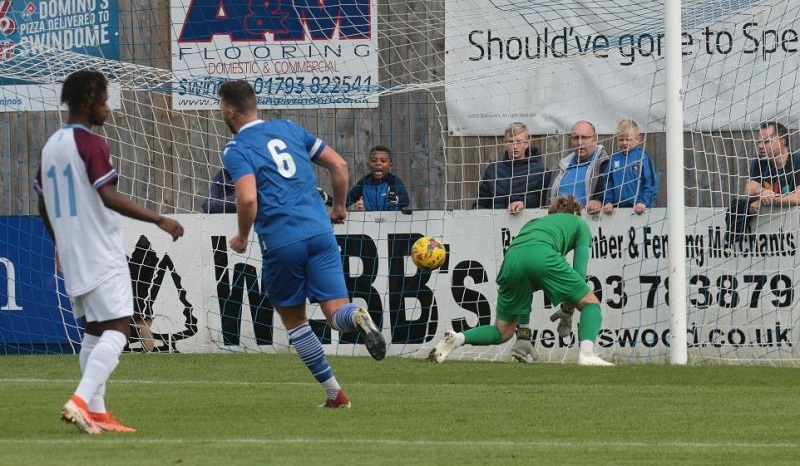 With Stuart Fleetwood on the bench, Hooper regained responsibility from the spot and confidently dispatched his penalty high to the left of North into the corner of the net. A fantastic start for the patched upside who could only name three outfield substitutes.

Martin Horsell saved an effort from Karl Oliyide before excellent positioning from Louis Spalding saw him clear an effort off the line following a United corner which Sandro Fernandes fired the rebound across the face of goal and wide of the far post.

Ryan Campbell got his co-ordination slightly wrong when he jumped highest at the back post but couldn’t direct Gray’s cross back towards goal. Fernandes missed the target again as he side-footed wide when well placed four yards out. Then Campbell and Gray linked up excellently shortly after but both players saw their shots blocked before Gray then saw his effort deflect over the bar.

Louis Spalding, who was having another excellent game at left back and found himself in a goal scoring position five minutes before half-time, but unfortunately for the left back, his effort went over the bar. The manager had faced some criticism about his son’s selection of late, so must be over the moon with his performances over the last month which has really seen him come-of-age and look the part at this level and his confidence is there for all to see.

Conor McDonagh should have made it 2-0 right on Half time, but as Hooper’s cross was deflected back to him, the striker turned inside his marker and uncharacteristically hit a tame effort at North with the goal at his mercy.

Chesham pressed hard to get back into the game in the second half and had the ball in the net immediately after half time, but referee Andrew Hobbs saw a foul on Horsell as a visiting attacker jumped into him and stopped him being able to return to his feet to stop the ball and blew his whistle for the infringement.

Campbell went close twice for the hosts as his cross evaded everybody and from the resulting goal kick, the ball dropped to him but his volley from 25-yards drifted wide of the post.

Horsell then made a full length save from Fernandes tipping the ball past his post although referee Hobbs pointed for a goal kick much to the dismay of the visiting bench and fans.

With the game getting stretched, Chesham began to show gaps at the back and following a mix-up between Karl Oliyide and Sam Jenkins, substitute Fleetwood pounced, advanced on goal and excellently finished past North from outside the box.

A late defensive slip in the 6th minute of time added on saw Oliyide deny Horsell of a clean sheet, but it was too-little-too-late as Hobbs blew time on the game shortly after the restart which will be the only negative on the day for the home team who maybe didn’t manage the goal situation late on as well as they could have done.

A fantastic performance from Spalding’s men who return to the Webbswood Stadium this Tuesday with another home match against Blackfield & Langley with a 7.45pm kick-off and it will be three games at home in eight days when they host Farnborough on Saturday, 12th October with a 3:00pm kick off.