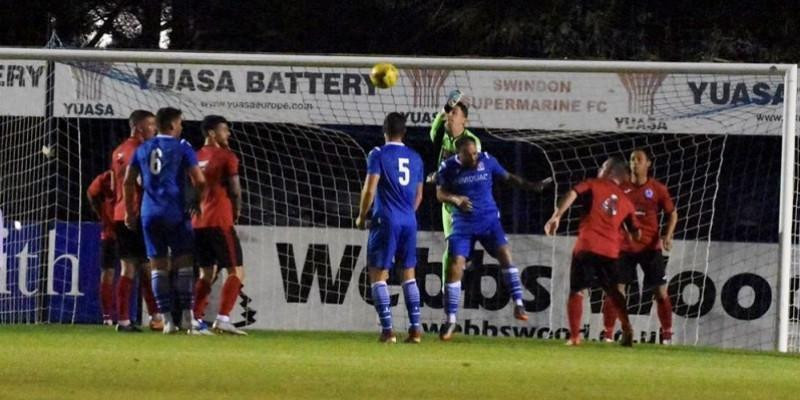 by Brian Davis(Media & Press Officer)
Supermarine ran out comfortable winners in the Southern League Challenge Cup Preliminary Round beating Larkhall 4-1 at the Webbswood Tuesday night. It was their second cup victory in under a week following their 3-0 FA Cup win in Wantage Town on Saturday.

The Larks keeper Shaun Semmens denied Stuart Fleetwood early on with a good low save and the striker failed to hit the target a few minutes later heading over when well placed in the centre of the area, only 6-yards out.

The home side then found their shooting boots when Kane Simpson scored a spectacular effort from fully 30- yards as he received the ball in midfield, turned inside a defender and options in front of him, looked up and rifled in an effort over the head of Semmens and into the back of the net. A quite fantastic strike from the striker, who now leads the team scoring charts with four goals on the season.

Bradley Gray, who returned to the starting line-up then finished off a wonderful team move, skilfully placing his finish first time inside the post from a low Joe Shepherd cross which was expertly left by Henry Spalding in front of the keeper.

Gray, Simpson and then Henry Spalding all saw efforts miss the target ahead of Semmens denying Brad Hooper who had made an excellent surging run into the box only to see his effort blocked by the keeper and less than a minute later Henry did hit the back of the net in first half stoppage time when he received the ball on the edge of the area, cut inside his marker with a fantastic piece of skill and tucked his effort into the far corner with his right foot.

Manager Lee Spalding had earlier commented that it was time his midfield players started chipping in with goals, so to have two in the first 45 minutes, plus the goals from Saturday, will have surely pleased him and give him even more early season optimism. 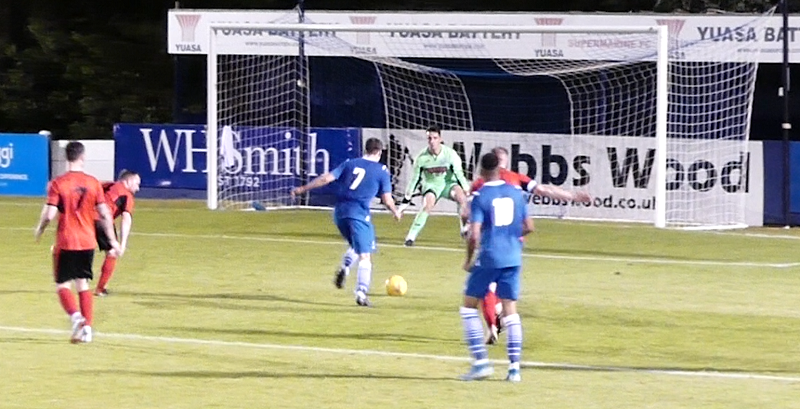 Larkhall made three half time substitutions as they looked to shake things up and get back into the game, and it would be one of those subs, Lewis Powell, who caused ’Marine the most problems on the night. Less than ten minutes after coming on he hit the post and did then find the back of the net on the hour mark as he got in between Liddiard and Louis Spalding to force his header in at the back post.

Fleetwood could have scored a fine individual effort himself, but once again, Semmens played party pooper smothering at the forwards feet as he was about to pull the trigger. With ten minutes to go, substitute Conor McDonagh sealed the result when he received a well placed through-ball from Fleetwood, breezed past his marker and finished low beyond Semmens.

Another substitute Harry Williams should have made it five in the last minute but pulled his effort wide across the face of goal, but the encouraging sign for manager Lee Spalding was getting him back onto the pitch and having four fit strikers again heading into a hectic period of games in September and October.