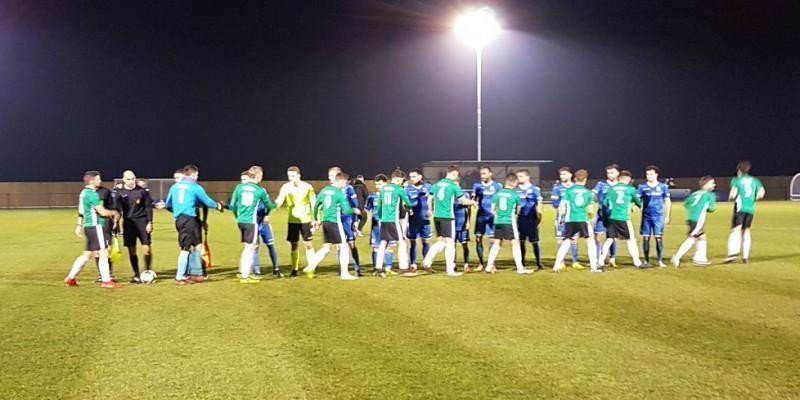 by Brian Davis (Media & Press Officer)
Swindon Supermarine needed extra-time to make it through to the final of the Wiltshire Senior Cup as the Swindon outfit battled past a well-organised Westbury United 4-1 on Wednesday night. After a goalless first 85 minutes, United took the lead with an excellent volley before a Brad Hooper penalty rescued an extra half an hour for Marine. Josh Parsons scored twice, and Connor McDonagh netted in extra-time as Marine survived a scare and will now face Salisbury City in the final.

Marine manager Lee Spalding was left feeling relieved that an underwhelming performance did not end up costing his team and said he was delighted his side had made it through. He said: “I didn’t think we started the game well – in the final third, we didn’t have enough shots in the first half, we didn’t get enough crosses in the box and our overall quality in the final third was really poor. “I was disappointed to concede the goal in the manner we did, but fair play to the boys – they showed a good reaction to come back well and in extra time, our extra fitness showed, our extra quality showed and we showed, in the end, what we are capable of.”

Spalding made seven changes to the team that drew 1-1 with Poole on Saturday as only Will Henry, Dan Williamson, Michael Hopkins and Connor McDonagh kept their places in the starting XI. After a frantic start from both sides, which saw Marine’s Joe shepherd have a powerful effort beaten away and Will Henry slice a back-pass narrowly wide of his own post, Westbury nearly took an early lead.

Matt Coupe was robbed of possession inside his own half and only an excellent low save down to his right from Will Henry one on one prevented Westbury from opening the scoring.

The majority of the game passed by with very little action – the next notable event came ten minutes from time Marine left-back Hopkins struck a free-kick straight at the ‘keeper. With five minutes of normal time to play, United’s Joshua Ferguson struck a sweet left-footed volley past Henry and the underdogs appeared to have completed their smash and grab. Yet, seconds before the end, Parsons was fouled just inside the box and Brad Hooper stepped up to rescue Marine from the spot.

FT: 1-1 Once extra-time had begun, Marine appeared to step up another level and promptly took the lead for the first time. Selman’s ball into the box slipped under the foot of a Westbury defender and Parsons was on hand to poke Marine in front for the first time. Not to be denied a piece of the action, McDonagh settled the tie in the second period of extra-time as he tapped in a rebounded effort to make it three, and with seconds to play, Parsons tapped home his second, sealing Marine’s passage through to the final. In the aftermath of the goal, a Westbury defender was sent off for dissent.

Top Photo: The two sides go through the formalities