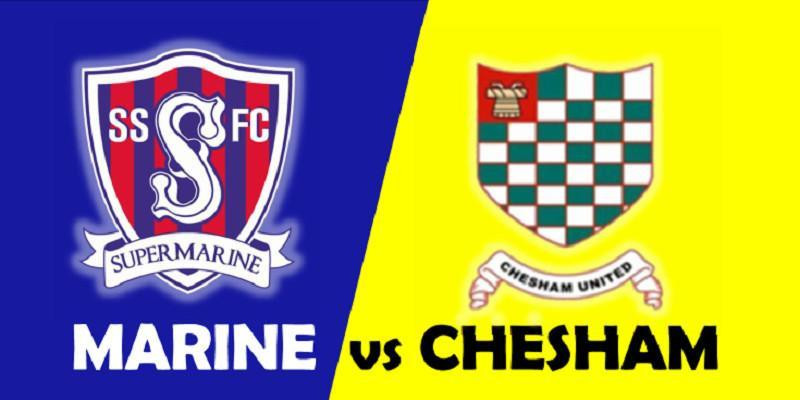 THE GENERALS ARE IN TOWN

Marine are back in action at the Webbswood Stadium this Saturday as they take on Chesham United, the turnstile is open from 13:00 and kick off is 15:00.

Under the leadership of joint bosses James Duncan and Michael Murray the Generals are on a strong run having not lost since November and sit just outside the playoffs in seventh spot so Saturday’s game is going to be a tough challenge for the team. Chesham have only lost five times all season but have drawn ten hence they are not higher up the league table.

Marine for their part now sit in 16th but recent results have not really reflected an improvement in their play over the last month being edged out in their recent away trips and a strong 6-1 home win last time out against Walton Casuals.

Our earlier visit this season to the Meadow, the home of Chesham United in October saw Marine put in a strong showing claiming a 1-1 draw with David Pratt levelling on the day after Brad Clayton had put Chesham in front. Clayton is certainly one to watch for the visitors having bagged 15 goals to date in just 19 appearances. Last time out between these two at the Webbswood Stadium was way back in October 2019 when Marine came out on top 2-1 with strikes from Brad Hooper and Stuart Fleetwood winning the day.

Tom Mehew will be looking to keep up his fine form since his loan move from Bristol Rovers. The young midfielder picked up the January Player of the Month vote from the fans this week which was much deserved from an outstanding player. Meanwhile Conor McDonagh returns from his loan spell at North Leigh having hit 10 goals in 8 games during his time there which gave him valuable match fitness to regain the sharpness, much as Harry Williams did earlier in the season at Cirencester Town before coming back to be a regular on the scoresheet. The exact move that fellow striker Zack Kotwica has completed today, a month on loan at Cirencester Town. We wish him all the best and we know he’ll come back that match fitter and sharper by playing regularly.

Injury news is that Pierce Mitchell and Frankie Artus remain sidelined although the good news is that Pierce is now back in light training and due back to full training next week and should be back in the squad next week. With Jed Ward being recalled back to Bristol Rovers there is a timely return from illness for goalkeeper Martin Horsell and George Dowling is also back from a three match ban after his harsh red card against Hayes & Yeading. Jamie Edge however misses out with the first of a two match suspension for accumulating 10 yellow cards.

Manager Lee Spalding said: “With 14 games left of the season we need to make sure we approach every game as a cup final, the most important match is the next one this Saturday and we must make sure we are at our very best and put in a performance in front of our home fans. Chesham’s recent form shows how far they have come since both teams met earlier in the season.“

Both cash and card payments are accepted at the turnstile

Please come on down to the Webbswood Stadium! BRING A MATE and BUILD THE GATE!