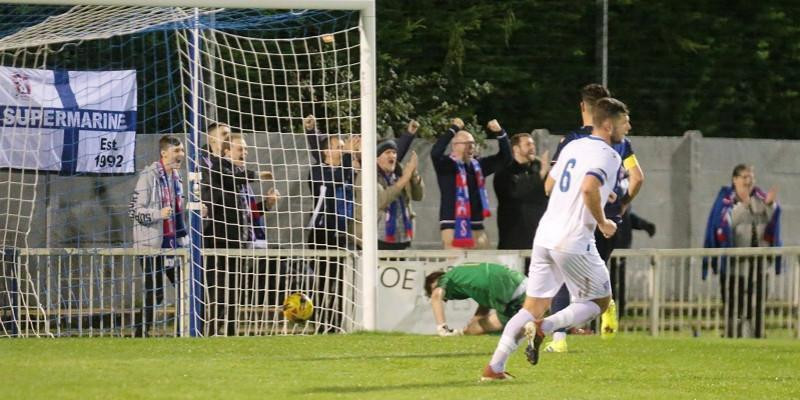 by Brian Davis (Media & Press Officer)
Driving into London Tuesday evening we passed Thorpe Park and I was reminded of how much fun Rollercoasters are as the ride “Stealth“ stood tall and proud, a short distance away from the M3. Little did we know at that point, that we would have our own football rollercoaster ride at Imber Court only a few hours later!

On arrival the evening started with the usual pre-match buzz, somewhat similarly to the excitement when you walk into a Theme Park, “What direction shall we go in? What shall we ride first?” and there were similar questions being asked as Met Police quickly established a two-goal lead. “What direction is the manager going to take here, what is the next turn that this game is going to take?” The self-doubt of “Do I want to be in the queue for this particular roller coaster” set in. 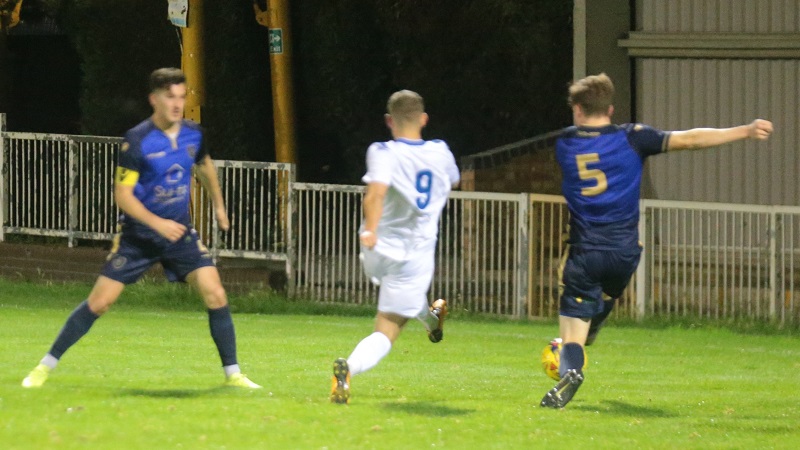 ’Marine made a slow start, akin to getting in the queue for the most popular ride at the busiest time of the day, it was slow and a little lethargic as Jack Mazzone hit a speculative effort over whilst Ross Murdoch twice tested Martin Horsell early on and it was Murdoch who was on hand, as The Boys in Blue went 1-0 up when Horsell parried a shot from Mazzone back to him to fire into the back of the net. 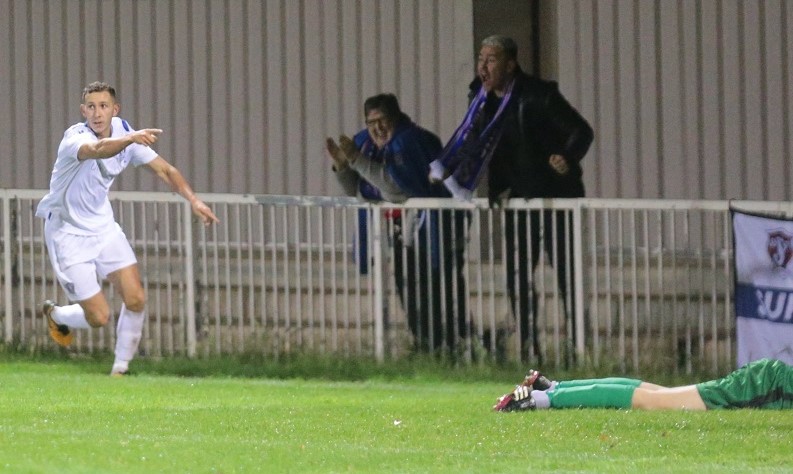 The ’Marine players then parted and gave a fast pass to Luke Robertson who showed off his credential to everybody on his way through the fast pass lane, aka the middle of the park and smacked his effort low into the far corner from 20-yards.

That Rollercoaster queue had now moved forward a little into that area where there are often screens and interactions to keep guests entertained and when Harry Williams was fouled on the edge of the area it presented a chance of a free-kick in a dangerous area and a chance to test Charlie Burns tending the Met’s net.

It was the recalled Michael Hopkins, filling in at a more advanced role in place of Ryan Campbell, who missed the game with illness, who then proceeded to curl home an absolute beauty of a set-piece into the top corner of the net giving Burns no chance. Buckle up, it could get bumpy!

Conor McDonagh then dragged an effort across the face of goal and almost then squeezed in an equaliser from 20-yards but his curling effort came straight back off the frame of the post. It’s at this point, the Supermarine fans were firmly in the seats of the roller-coaster and excited to see what twists and turns would come next! Hopkins had another chance with an almost identical free kick but opted for the opposite corner this time and curled his effort over the bar in first half stoppage time.

This wasn’t to be the roller coaster that fires you off at the start at 70mph, but more of a ride that has that slow clunky climb and the excitement ahead maybe hidden or at the end! Brad Hooper got into an advanced role, managed to get around Burns but from the very tightest of angles couldn’t get enough purchase on his effort and the same post that denied McDonagh came to the visitors aid when Bilal Sayoud squared for Murdoch who saw his effort smash back away off the woodwork. 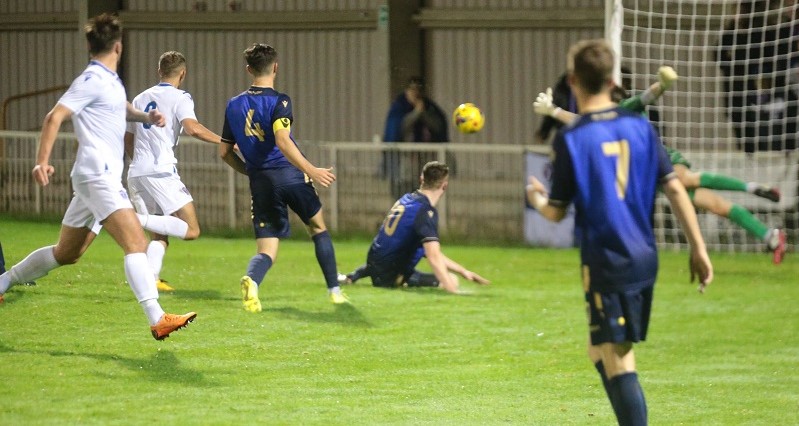 Louis Spalding was forced to leave the field following a heavy challenge from Ollie Knight which was only rewarded with a yellow card when the witnesses in the ground felt a much stiffer penalty was warranted! Harry Williams then went close when Burns tipped his effort over and from the corner Brad Gray couldn’t wrap his foot around his near post effort. Henry Spalding tested Burns with a low effort from 20-yards and Horsell did well to parry away Robertson’s effort which rebounded to Sayoud who knocked his effort over the bar. 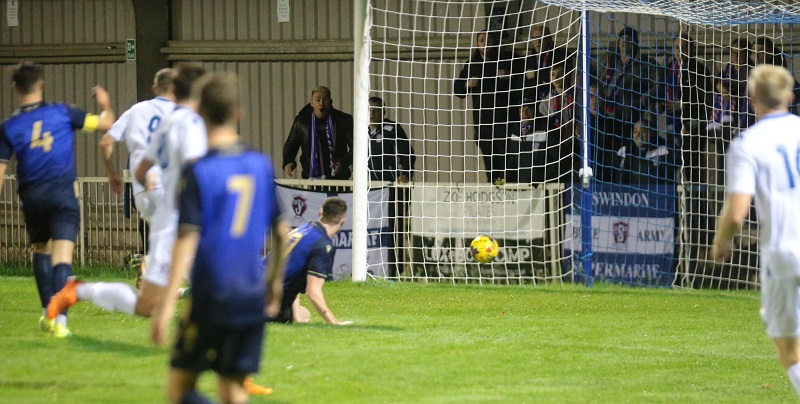 Substitute Stuart Fleetwood headed wide from 6-yards out when unmarked at the back post and it was looking like the rollercoaster would turn out to not be worth the queue, until….. the away side broke down the left-hand side and as the ball was delightfully played low into the box by Hopkins. Fleetwood deftly flicked the ball on and there was Harry Williams arriving at pace to slide the ball low past keeper Burns for the equaliser.

This rollercoaster had taken a sudden turn and the game was turned on its head. McDonagh hit an effort over the bar from the edge of the box and Horsell made a superb save at the other end denying the hosts whilst Henry Spalding tested Burns from distance again. 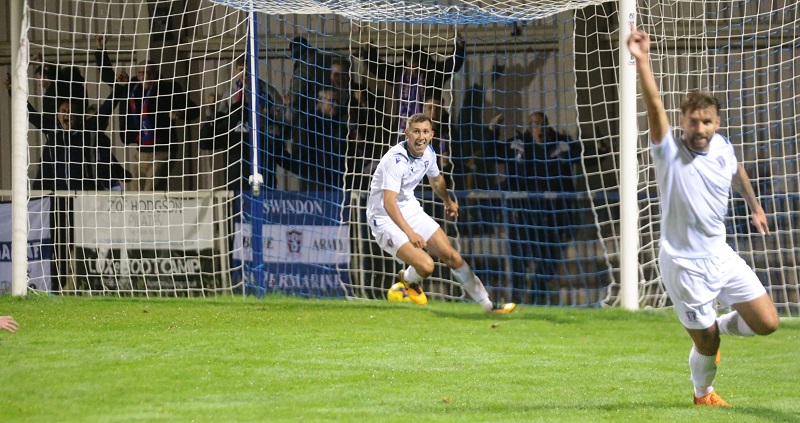 This is the point where you’re hurtling down the track, head banging side-to-side against the seat and here comes THAT loop! That loop that NOBODY saw coming, that loop, NOBODY told you about, that oh my word moment, this is about to happen, that heart in the mouth, time stands still, but at the same time is moving at 100 miles per hour whilst you try and process everything, the complete 360 corkscrew, flip everybody on their head moment and that came as Henry Spalding played over a speculative cross into the box from the right wing. 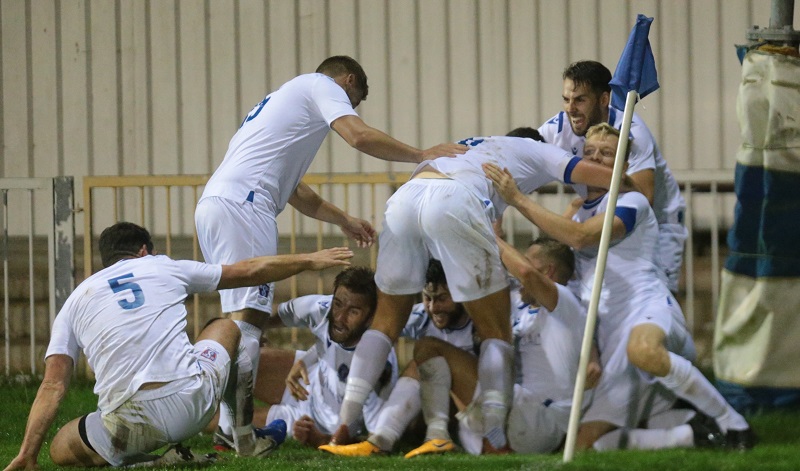 The cross come shot evaded everybody and bounced into the far corner of the goal off the bottom of the post, sparking wild scenes on the pitch from the players who formed a 10-man bundle and behind the goal from the Supermarine fans who if they weren’t at the home of the Police, may well have been tempted to join in!

The roller coaster pulls back into the start. Everybody gets off with a smile on their face. Everybody will recount this ride for years to come. Everybody will tell the tale of the night they were there to ride it. The ride they rode, how it went, the highs and lows, the fun they had, the rollercoaster of football. There is NO rollercoaster like it. Nothing messes with your emotions more than being on THAT rollercoaster.

When are we riding it again? Nobody knows. That’s the beauty of the football rollercoaster.