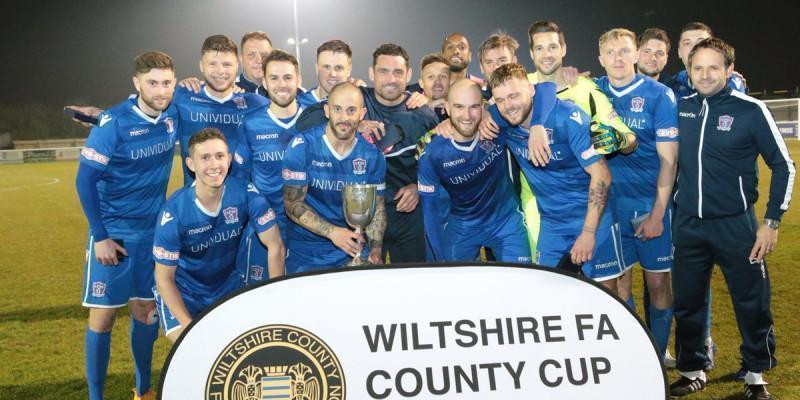 by Brian Davis (Media & Press Officer)
Swindon Supermarine won the Wiltshire Senior Cup Final for the second time in three years and were convincing in their way of doing so at Melksham Town’s InFiled Arena. They comfortably pushed aside division rivals Salisbury on Wednesday night extending their unbeaten run against the South Wiltshire side to 5 games.

Both sides fielded strong teams with Steve Claridge’s side, making only four changes from their Southern League win on Saturday at Dorchester Town. Making a nervy start to the game against Lee Spalding’s side who themselves only made three changes from their win at home to playoff bound Met Police. Martin Horsell returned in goal, with a change of formation seeing Ryan Campbell and Henry Spalding return on the wings in place of Harry Williams up front and Matt Coupe at the back. 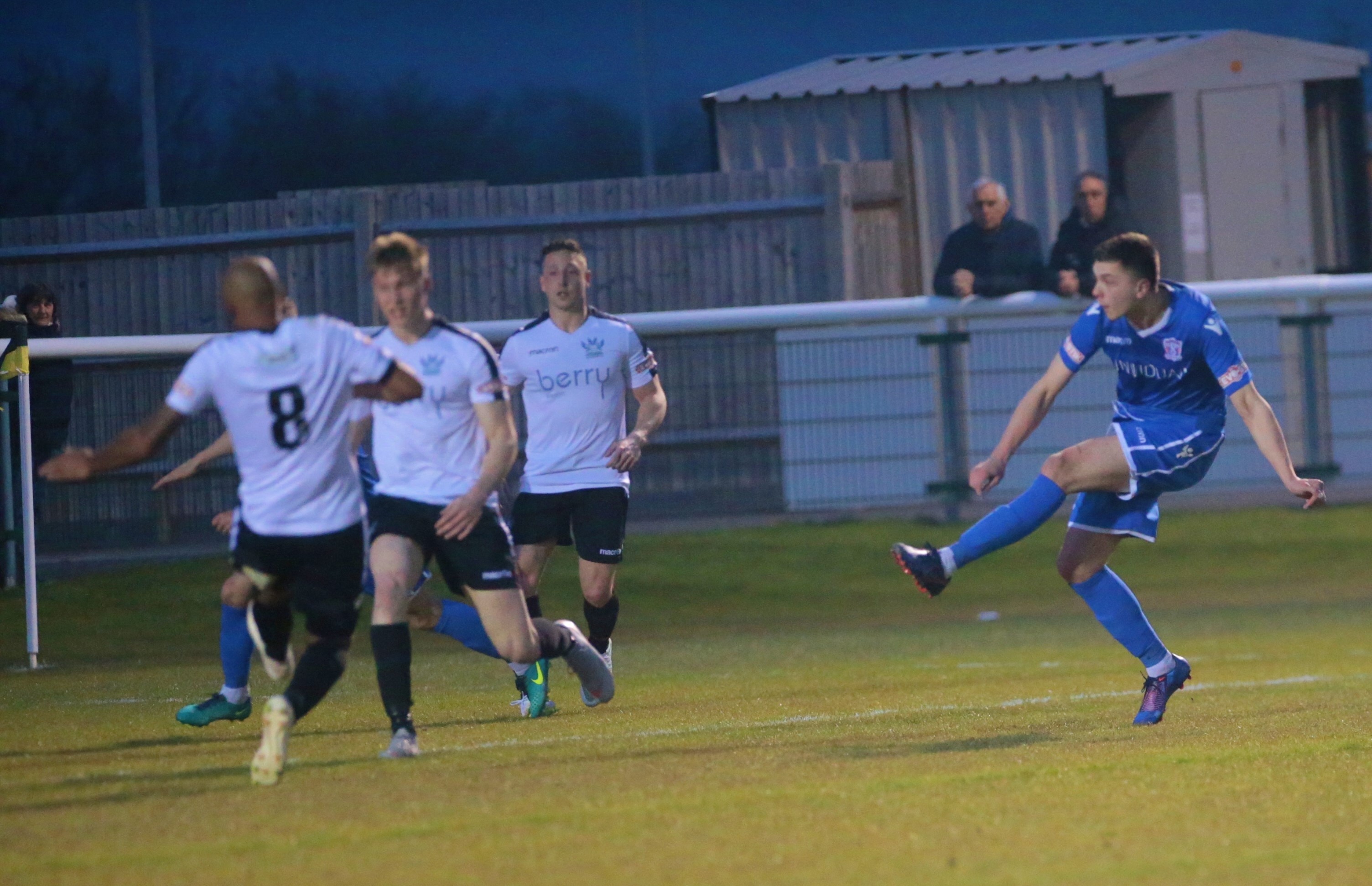 Marine could have been one up when the Salisbury back four struggled to clear the ball away from Conor McDonagh and Stuart Fleetwood, but a blocked shot and a last gap tackle saw the strikers both denied and the challenge on McDonagh would ultimately end his evening ten minutes later when he limped off to be replaced by Harry Williams. Calvin Dinsley who had his head injury glued following the Met Police game had the games next chance but his volley went wide of the post from the edge of the box.

Both teams had half shouts for penalties, but the officials were unmoved on each occasion. Salisbury won a free kick deep in the Marine half just over half way through the first half and their first chance was blazed high and wide by Tom Whelan from distance. 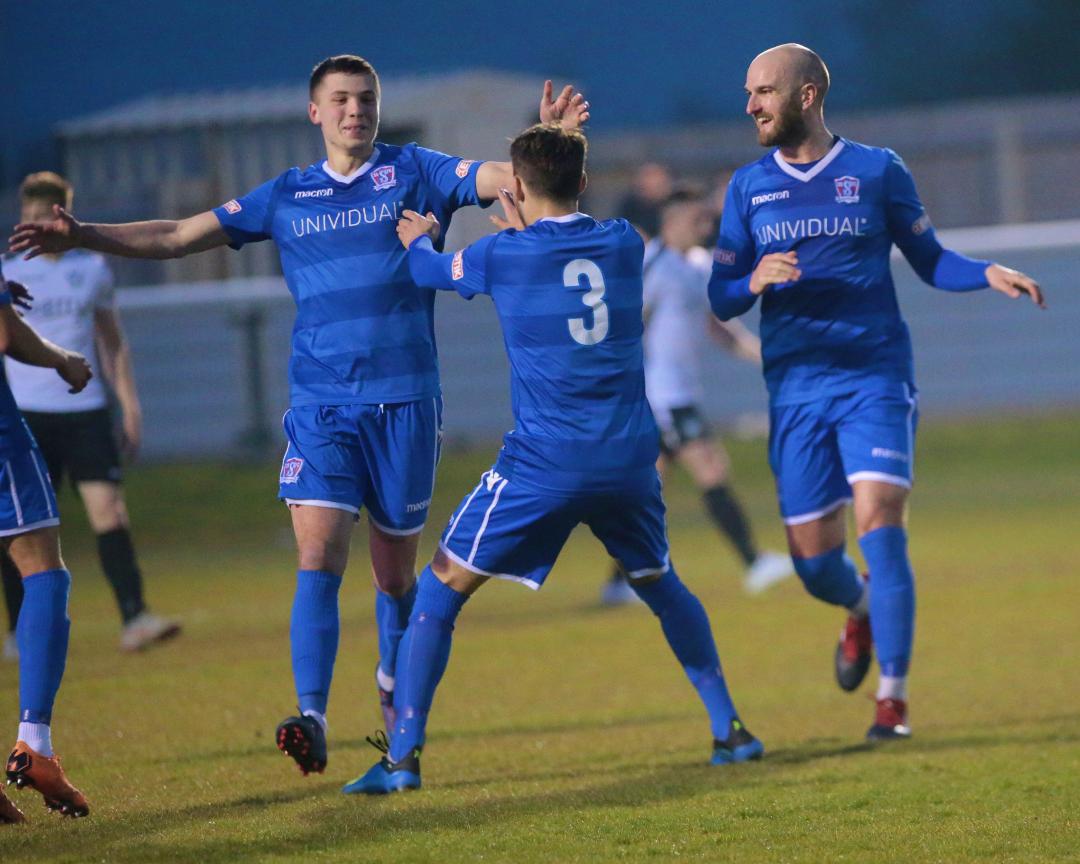 It took a moment of magic to trouble the brightly lit Melksham scoreboard and it came from the returning Henry Spalding who took an excellent touch at the corner of the area from Michael Hopkins cross-field pass to set himself up on his left foot and curled an absolute stunning strike into the top corner that Hallett couldn’t get anywhere near. It was a goal worthy of a Cup Final. The Whites then lost a striker of their own when former Marine hitman Luke Hopper was forced off with injury prior to half-time.

Marine came out flying to start the second half and it didn’t take long for them to double their lead. A foul led to a free kick that caused more confusion in the White’s box when Hallett came to punch Jamie Edge’s kick but miscued his clearance and when it hit his centre half O’Keefe, it rebounded towards goal where Harry Williams had the easy job of sliding in to put it over the line.

Whelan really came into the game in the second half for Salisbury and it was his corner that eventually led to Mat Liddiard clearing off the line and from his second corner, the ball fell to Young whose effort just went past Horsell’s post. Brad Hooper replaced Dinsley late in the second half and went close almost straight away but his effort from distance continued rising over the bar. 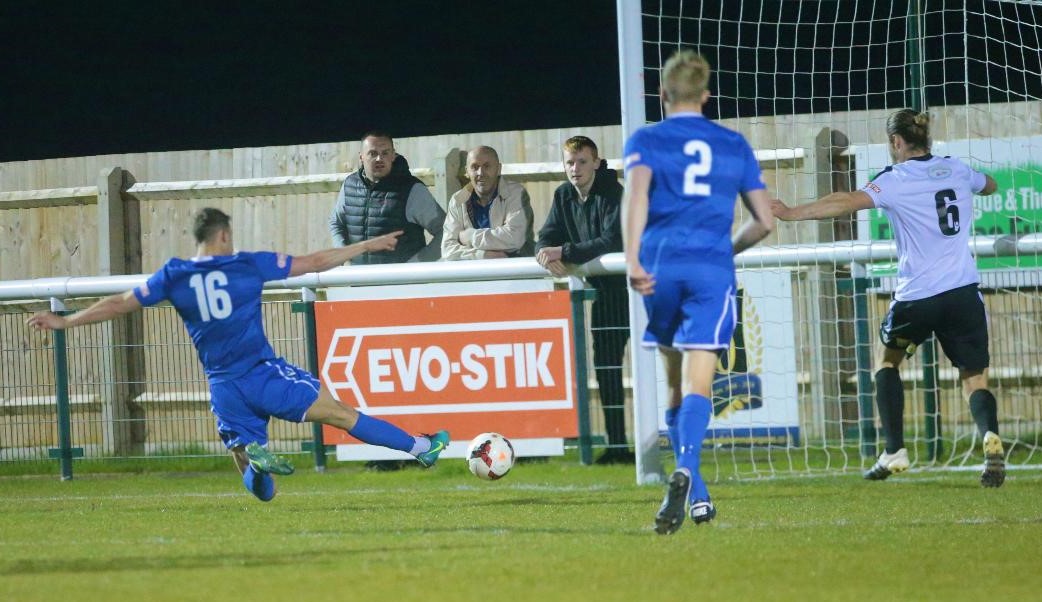 Harry Williams score our second goal early in the second half. Photo by Jeff Youd Photography

The game ten had a crazy couple of minutes when Harry Williams broke the offside trap, advanced in on goal but Hallett denied him with his feet. Campbell followed it in but he saw his effort agonisingly go wide of the post. Stuart Fleetwood then forced the Salisbury keeper into an excellent save pushing his effort away to safety and as Salisbury broke downfield, they won a free kick near the right touchline.

The kick was dangerously delivered into the box and deflected into the net off the unfortunate Marine right back, Joe Shepherd, for an own goal. Salisbury’s Chris Shephard then had the Swindon fans holding their breath when his effort flashed inches wide of the post as Claridge’s men pushed for an unlikely and undeserved equaliser. 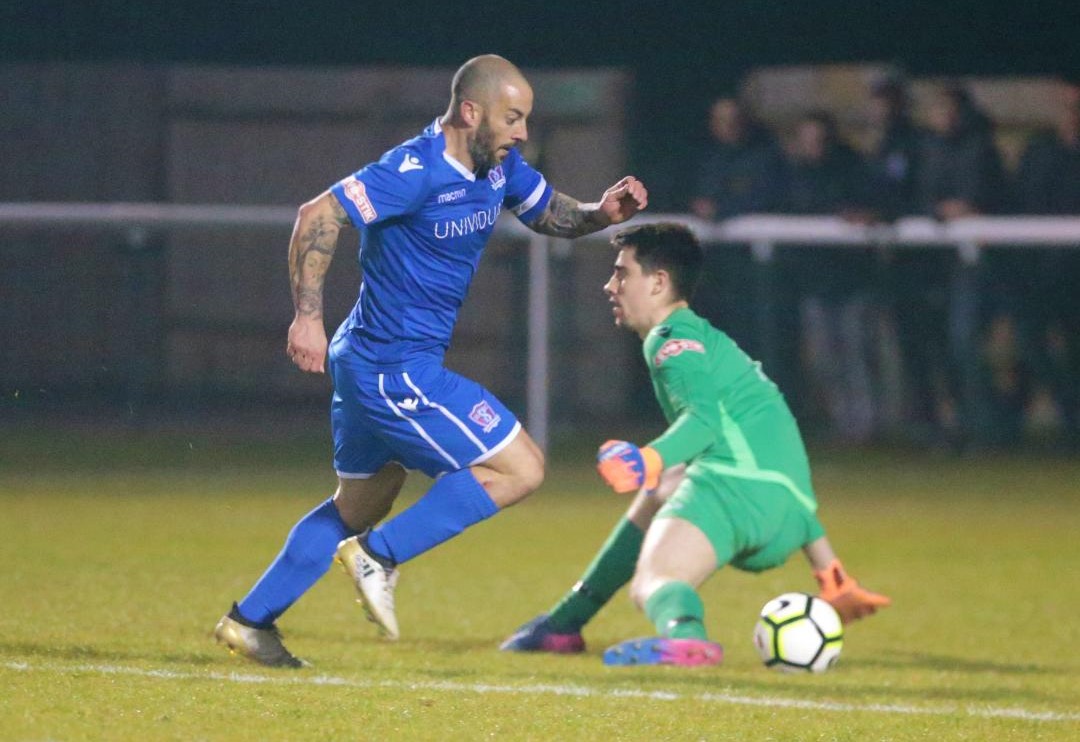 Stuart Fleetwood goes around the keeper to seal the win with a last minute third goal. Photo by Jeff Youd Photography

However, the game was won for Marine with the last kick of the match. With Salisbury pushing everybody forward in search of the equaliser, the ball was won back and played to Fleetwood just in his own half. He showed great pace and composure to advance over half the length of the pitch and go around the advancing Hallett before rolling the ball into the empty net to wrap up a fine victory.

“I thought the lads were excellent tonight,” said Spalding. “It was a great performance, a great result and it’s good to lift that trophy at the end. I was delighted with the boys, I thought it was fully deserved.”

“In the first half, we scored a good goal to go in front. Henry’s cut inside and hit it with his left – it was one of those where you knew it was in as soon as he hits it.” “We played really well in the first half and were definitely the team on the front foot, we kept the ball really well and played the better football.”

Despite a largely dominant performance, the Marine chief – ever the perfectionist – felt his team could have won the game even more convincingly had they taken the plethora of chances that were presented to them throughout.

Spalding said: “In the second half, we started brightly and looked the better team. We could have scored three or four more, but we didn’t – that’s probably my only criticism of the evening.” “We could have been a bit more clinical, but at the end of the day, we’ve done the job and it’s a great achievement for the boys. I’m really happy for them.”