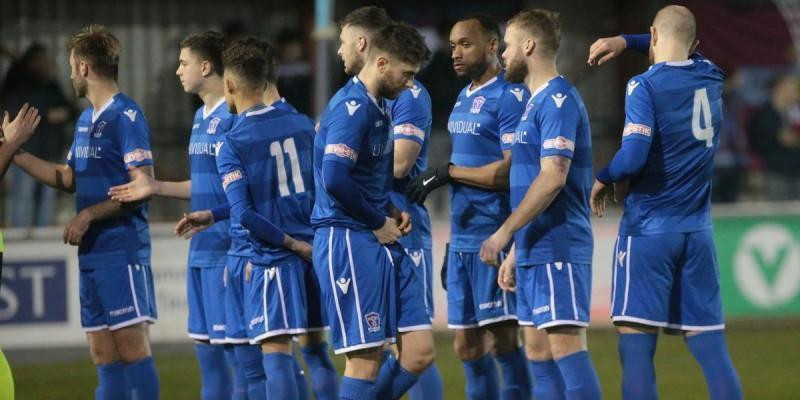 by Brian Davis (Media & Press Officer)
Supermarine once again proved that on their day they are more than a match for any team in the Evo-Stik Southern League Premier South after going toe-to-toe and blow-for-blow with league leaders Taunton Town on Wednesday night at the Viridor Stadium. If it was a Boxing Match, it would have been two heavy weights slugging it out for 12 rounds, matching each other round after round with each fighter landing heavy punches and counter punches.

Taunton started the brighter, but Supermarine ultimately landed the late blow to land the draw and with their guards down and tiredness kicking in at the end, both had chances to land the knockout blow in the last round but had to make do with a split decision.

When the home side did eventually find the target, Martin Horsell was on hand to deny them, tipping over Ryan Brett’s drive from the edge of the box and from the resulting corner Brett tried his luck again, but Horsell made a comfortable low save.

Jamie Edge picked up a booking for saying something to referee Stacey Pearson which proceeded a big penalty shout for Lee Spalding’s men as Ryan Campbell drilled a low cross which appeared to strike the hand of a Taunton defender, but Pearson gave just the corner. From the corner Edge headed over and wide.

Campbell sliced an effort well wide of goal from the corner of the box ahead of Conor McDonagh failing to add to his tally for the season after being played through by a wonderful Henry Spalding through ball, but as ‘Marine’s leading scorer took a touch and advanced on goal, he was denied by Lloyd Irish who spread himself excellently to parry away his effort to safety.

The hosts then came close when former Marine loanee Matt Wright hit the post with a header from Pierce Mitchell’s excellent cross. Mitchell then had a long range effort fall just over the bar and late in the first half, Horsell missed a punch from a corner and as the ball dropped it was hacked off the line by Michael Hopkins who was well placed on the post.

As the players went off at half time, one of those strange requests that you don’t often witness came across the PA system. “If you are a qualified match referee, please can you make yourself known to a club official” After a slightly delayed half-time, the players appeared, but no officials. Eventually, a stand-in referee, Scott Jackson, entered the pitch with his two assistants as Pearson was unable to continue with an injury.

Stuart Fleetwood had the second half’s first chance but was denied by a recovering defender who blocked his effort off the goal line and one minute later, the Peacocks had the lead. The ball was played into the box and not cleared, with Marine defenders on the ground and looking on, Andrew Neal hammered his effort into the roof of the net to put the away side on the ropes.

To continue the boxing analogy, the next 20 minutes was a lot of huff and puff and jabbing and feeling each other out, with no real telling blows landed by either puncher. Fleetwood was unlucky to drag an effort wide of the near post with his left foot and with just three minutes remaining, the final round if you will.

The assistant referee flagged for a foul on Brad Hooper, the replacement referee didn’t look like he was going to give until the flag went up! The freekick was swung over into the box by Campbell, the ball dropped to Jamie Edge and he steered a low effort towards goal where the waiting Mat Liddiard was on hand to divert the ball over the line from 6-yards as the keeper looked to gather the ball and it was Taunton’s turn to be wobbling against the ropes.

Horsell then made an excellent low save and the rebound was fired into the side netting from close range by substitute Craig Veal which was a huge let-off for the away side. Marine looked to hit straight away on the counter, but Campbell couldn’t find the target from 18-yards as his effort went wide of the target.

A draw was a fair reflection of an entertaining game and another good advert for Southern League Football.