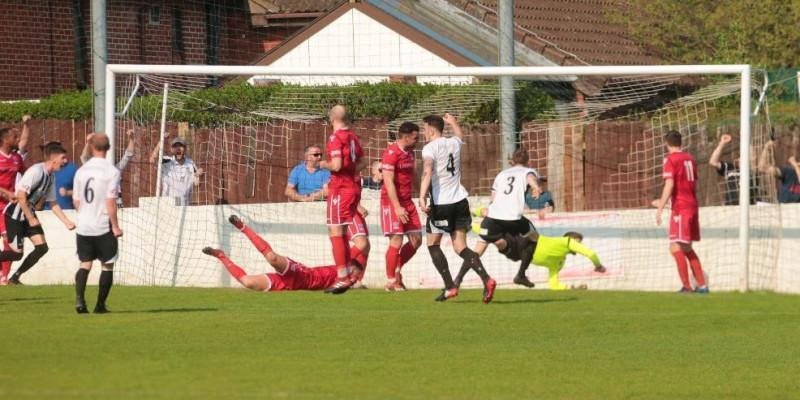 There were many similarities between this trip to Wimborne as their last one for Supermarine. Bank Holiday weekend – Check Hottest day of the year to date – Check Two edgey teams feeling each other out – Check Two teams with everything to play for – Check Albeit this year, one still has a chance at promotion whilst the other is fighting to stay in the division.

Ryan Campbell was a late emission with sickness, whilst Conor McDonagh who was injured early in the Wiltshire Senior Cup Final win versus Salisbury also missed out and Josh Hill returned in goal.

Wimborne made the brighter start and were the better side for the majority of the game which looked like it came a little too soon after the cup final for Lee Spalding’s team who looked tired throughout, although if the game had ended 0-0 there would have probably been few complaints from either team.

Magpies leading scorer Toby Holmes headed over early on from Billy Maybury’s cross, whilst Matt Williams, who was brilliant throughout made a crucial tackle in the box to also deny Holmes. Luke Burbidge had a shot that was straight at Hill, who also then made a save from Holmes after some nice one touch build-up play from Lee Francis and Burbidge.

Calvin Dinsley saw an effort go high over the bar before hitting a deflected effort that was comfortable for Gerard Benfield in the Wimborne goal. Harry Williams, starting in place of McDonagh forced a good near post save out of Benfield after some fine wing play from Michael Hopkins. Hopkins would pick up a knock late on in the first half that forced him off at half time.

Dan Williamson came on in place of Hopkins which forced Joe Shepherd over to left back with Williamson fitting in at his natural right back position. Burbidge continued to cause problems for the away side and his cross-cum-shot was parried to safety by Hill.

Benfield then beat Fleetwood to a long ball forward but could only half clear the ball to Henry Spalding on the half way line, but his long distance effort fell short of the near post. Harry Williams got free down the right hand side again, but his pull back was pinched away ahead of Fleetwood as it looked like he was about to put the away side into the lead.

A free kick from the right hand side for the home side eventually led to the winner as the ball was only half headed to safety by Shepherd and with the ball sitting up nicely, Franklyn Clarke got over the ball expertly to volley through a crowd of players to put Matt Holmes’ team 1-0 up.

Toby Holmes headed over the bar whilst Dinsley failed to trouble Benfield again as his effort went over the bar. Burbidge can count himself unlucky to not gain an assist when he expertly got down to the by-line and crossed, only to see his efforts missed by the advancing Wimborne attackers and fall to safety.

Spalding’s late cross was again taken right off the head of Fleetwood when it looked like he was about to score and the home side all but secured their safety for next season whilst Supermarine now miss out on the playoffs for the season.

Match highlights from Wimborne Town
Courtesy of Your Sport Swindon