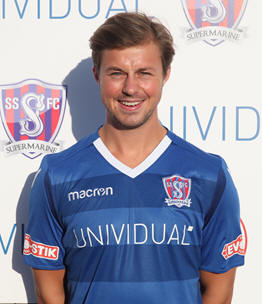 Profile: Connor signed in January 2016 after he was released by National Conference North side Gloucester City at the end of December 2015. He began his career at Hartpury College before going to the USA to further his academic and football career with Baltimore Bohemians. He then returned to the UK in 2014 and signed for Gloucester City. During his time with Gloucester he had a short loan spell with Cirencester Town in the 2015/16 season. After the disappointment of not making the squad for the first two games at the start of last season he remained positive and returned to play a part in 43 of the 52 games during the season and a member of the squad that won promotion. Connor is predominately an attaching midfield player who can also player at right back and a more central attacking role. He has good technical skills and a player whose signature was highly sort after by a number of clubs after his release by Gloucester City.

Sponsor: Sponsorship is available for Connor
Return to Profiles page