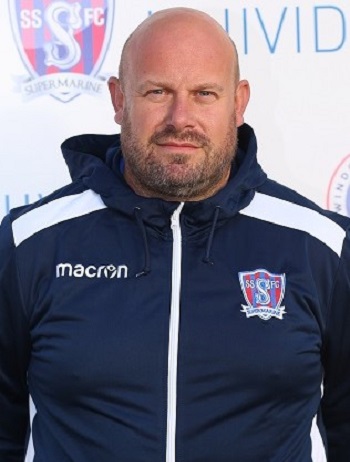 Profile: Matt played at Hellenic League level for Cirencester Town First Team and Reserves from 1994 till 2001 before a career ending injury prevented him carrying on. From then on he decided to focus on passing the football knowledge he had gained from playing into youth football and started his journey into Coaching at Liden Community FC in 2001, gaining his FA qualifications levels 1 & 2 in quick succession.

Matt quickly moved up the ranks at Liden and was Chairman for the youth section for two seasons before being approached by Swindon Supermarine Youth’s in 2009 to be a part of the new vision being created by the club. He has been a long serving member on the Supermarine family since 2009 and has been Chairman for the Youth Section from 2016 to present day.

Although continuing his involvement at Supermarine his coaching journey moved to Cirencester Town to undertake an Assistant’s role with Martin Doyle for two seasons from 2017 till 2019. In his time at Cirencester they were able to win back to back County Cups and League Cups. During his last season of 2018/2019 Matt assisted in taking them to the heights of winning the treble, which included the League Cup, County Cup and the League Championship.

Matt also currently coaches at Swindon Town FC Academy and Wiltshire Football Academy within the JPL league, where he has led them to the National League Quarter Finals in 2020 and were due to win the 2019/2020 league.

Matt holds an UEFA B licence, with the aspiration to gain higher coaching qualifications in the future. Swindon Supermarine Development Team will be his first venture into the world of adult coaching, which has been a lifelong dream.