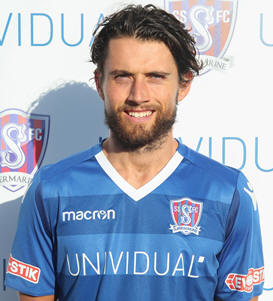 Profile: Sam first signed for the club on loan from Swindon Town in March 2009 until the end of that 2008/09 season. He then signed permanently in July 2009 after he was released by Swindon Town a month before. He’s played in his preferred midfield position for Marine, but he did make a number of appearances for Swindon Town as a central defender. Former manager Mark Collier was keen to secure Sam’s services before the 2009/10 season and he has since gone on to make over 330 appearances. Sam possesses a great engine to get up and down the pitch and will score the odd goal or two along the way. Although he didn’t start as many games as he would have liked before the 2014/15 season he has subsequently started a lot more in the last three seasons and will be looking continue that this season.