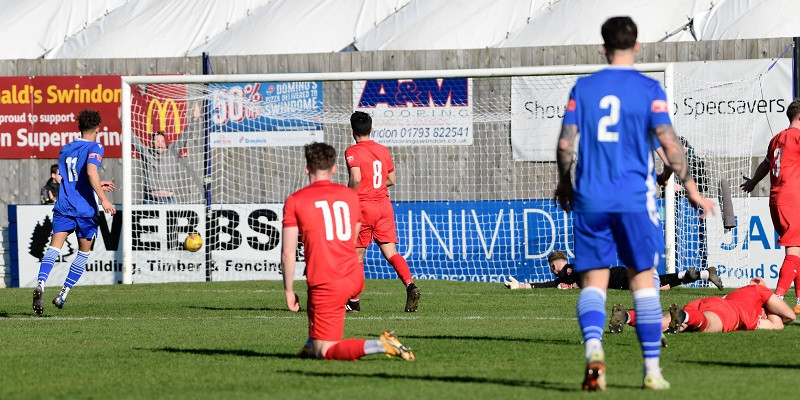 Swindon Supermarine welcome the Rams of Beaconsfield Town to the Webbswood for a clash this SATURDAY afternoon in what is sure to be a closely contested and exciting match.

Swindon Supermarine welcome the Rams of Beaconsfield Town to the Webbswood for a clash this Saturday afternoon in what is sure to be a closely contested and exciting match up.

Beaconsfield arrived in fourteenth place in the league having won just two of their seven games this season with Marine sitting in a comfortable fourth place with five wins from seven games. But under boss Gary Meakin the Rams are always a tricky outfit who Marine have found difficult to overcome in recent seasons. Despite this the visitors haven’t won since mid-August when they defeated the Metropolitan Police 3-2.

The Minhas brothers, Nathan and Aaron provide the goal threat up front but key man for me is ex-QPR midfielder Scott Donnelly who so often pulls the strings in midfield. Recent results between the two show that Marine haven’t beaten this opposition since 2019 and last season we went down 5-1 away and drew 2-2 at the Webbswood with Harry Williams and Henry Spalding on target, so its sure to be a score that needs to be settled as far as we are concerned.

Manager Lee Spalding reports that on the injury front, “George Dowling (hamstring) and Lewis Hall are unavailable (knee) and are expected to be out for at least three to four weeks. Lee also said, Beaconsfield are another very good side, we will need to be at our best if we are to continue our recent good run of results. It is important the team are fully focussed on what we have to do to get a positive result and put in another good performance in front of the home fans at the Webbswood stadium. Let’s hope we can start attracting some new faces and keep the attendances growing and push forward both on and off the pitch!