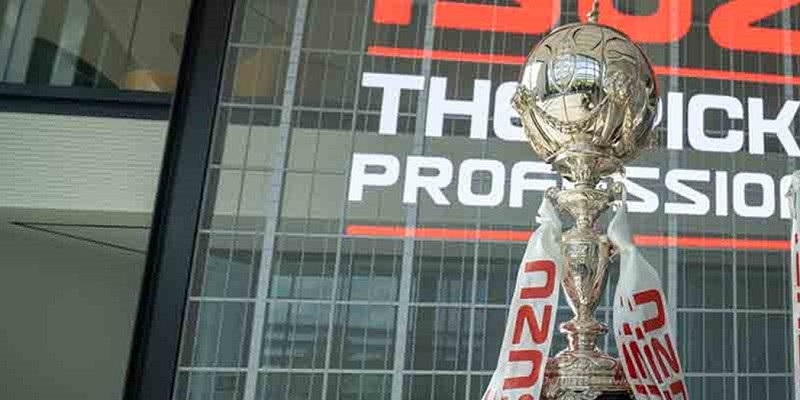 Swindon Supermarine welcome the Dartford to the Webbswood Stadium for a Isuzu FA Trophy tie this Saturday.

DARTS ARROW IN TO SUPERMARINE

On Saturday afternoon Swindon Supermarine welcome for the very first time National League South highflyers Dartford FC for a match in the Second Round of the Isuzu FA Trophy.

The Darts under experienced manager Alan Dowson sit third in the table just two points off top spot having had an unbeaten run of 11 games until succumbing to Farnborough last weekend, so this will be the stiffest of tests for Marine. Dowson picked up the National League South manager of the month for October.

Key men for Dartford are former MK Dons striker Samir Carruthers who has netted eight goals this campaign and former Norwich City youth player Pierre Fonkeu. But the big name in the squad is that of Sheringham. Not the former England, Spurs and Man Utd forward Teddy but his son Charlie Sheringham who has been a journeyman at the top level of non league football for some time now.

This is the first match in the competition for Dartford whereas Swindon have come through two previous rounds with a 3-0 win over Cirencester Town and a 5-0 thumping of Winchester City with Brad Hooper and Zack Kotwica scoring in both matches so far, a run they will be looking to keep up.

Team news is that Lewis Hall (knee), Tom Sharpe (knee) and James Harding (back) continue to be side-lined with injury and recent signing Joe Tumelty and Will Tunnicliff are both cup-tied.

Manager Lee Spalding had this to say: “It’s a big game for everyone involved with the club, the FA Trophy is a fantastic competition that we would love to progress in. It’s a home tie so we need to try and use that to our advantage, with the home fans behind the team we need to put on a performance that gets them fully behind the lads. Let’s hope we can perform at our best level if we do that then we give ourselves a chance of winning and getting in the hat for the next round!

The turnstiles and all other facilities are open from 13:00pm, with admission prices as follows:

Whilst we have FREE car parking for over 300 cars in the car park at the Webbswood Stadium it does get very busy on matchdays so why not travel by public transport and be rewarded at the same time. We encourage our spectators to use the Number 7 bus from the town centre bus station. It’s a 26-minute bus ride and a seven-minute walk from the bus stop at South Marston Park, and on production of your bus ticket for day the of the match to either the bar staff or kitchen staff and you will be rewarded with either a FREE pint or a FREE snack of your choice! This makes the Webbswood Stadium more accessible to all and has greener credentials, please try it!