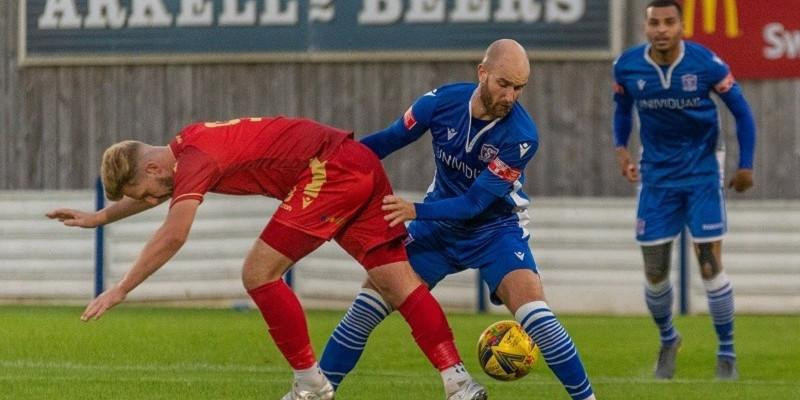 QUICK TURNAROUND FOR THE POLICE

Swindon Supermarine are home again this weekend as the pace hots up in the Pitching In Southern League Premier Division South.

We entertain a Met Police side managed by boss Gavin McPherson, having finished last season in a playoff spot before losing out to eventual playoff winners Farnborough. Last season saw us draw 1-1 at the Webbswood Stadium in our first home game of the season with a George Dowling deflected goal equalising a Liam Ferdinand opener. Before going down 3-1 away in the first game of this year with Tyrone Duffus on the scoresheet. Marine have a good record at home to our opponents having never lost to them here. In fact that defeat in January was the first ever loss to the Met Police but all our previous encounters have beeb close games. The Police have made another good start this season and sit just behind us in the table in fifth having beaten Hayes & Yeading and North Leigh but like ourselves suffered their first reverse in midweek losing 3-2 at home to Beaconsfield Town.

Team news is that only Ryan Campbell remains on the side lines with a broken bone in his foot but I expect manager Lee Spalding to shuffle the pack in a busy schedule and with such a talented squad at his disposal. Herson Rodrigues-Alves could be the man to watch for the visitors having scored in all three games so far along with central striker Jasper Mather also had two goals in three for an attacking and high scoring team. It’s another massive game as we look to keep up our impressive start to the season.

Manager Lee Spalding had this to say “Saturdays game is a game where we will be looking to bounce back from our first defeat of the season. The team need to show the same energy levels they showed last week at home against Hendon. The lads have set their own standards in the first two games and need to be at their best every week to pick up points. If we can find that consistency then we have a good chance of winning games, it starts tomorrow against a good Met Police team.”

Tomorrow also sees the official launch of our 30th anniversary souvenir bottled beer, named appropriately ’Supermarine Gold’, on sale in the clubhouse bar for £4.00 a bottle from tomorrow.

WHEN ITS GONE, ITS GONE