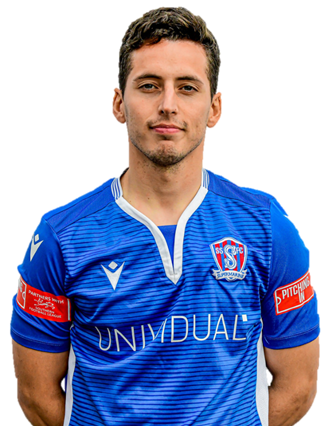 Pablo is an experienced forward or attacking midfielder who arrives at the Webbswood Stadium from Southern Premier Division Central outfit Banbury United. The 29-year-old joined the Puritans in June 2019 from league rival Salisbury. He was originally with Oxford City and was a regular in their Hellenic League Oxford City Nomads side, as well as making a few first-team appearances for them, prior to joining Didcot Town in the summer of 2012. In three seasons with the Railwaymen, Spanish-born player scored 36 goals from 120 appearances, attracting the attention of phoenix club Hereford, who he then joined in the summer of 2015. At Edgar Street he was part of the side that won three successive league championships as the Bulls quickly moved up through the non-League Pyramid, scoring 52 goals for them in 142 appearances. With the additional travelling looming in National League North, should he had stayed at Hereford, he opted to leave them in the summer of 2018 and signed for Marine`s league rivals Salisbury. However, after scoring 5 goals from 30 appearances he then found playing opportunities limited with the Whites and returned in February 2019 to Didcot on loan until the end of the season.

Other Sponsorship is available for Pablo