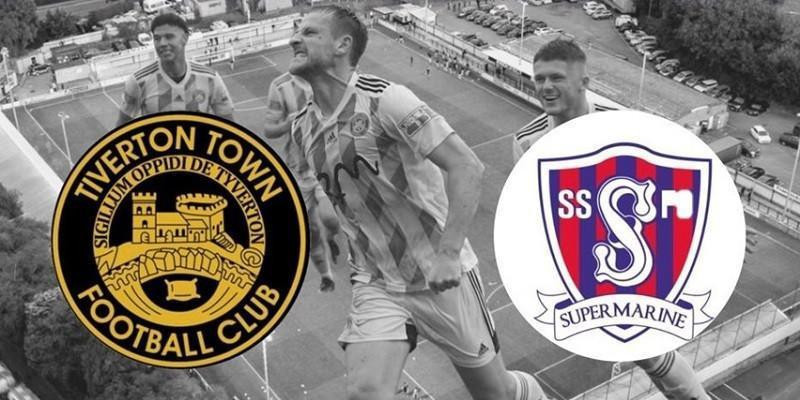 Supermarine travelled to the Ian Moorcroft stadium on Wednesday night, home of Tiverton Town in the FA Trophy after the weekend clash was postponed due to a waterlogged pitch. Marine had to shuffle the pack after Pierce Mitchell (toe), George Dowling (thigh), new signing Kieran Phillips (ankle), Conor McDonagh (personal reasons), and David Pratt on the eve of a potential transfer move Farnborough, all missed out on the game. On a positive note, returning to the starting eleven were Frankie Artus, Zack Kotwica and Dan Ball.

Supermarine made a very bright start with Brad Hooper playing in Zack Kotwica but despite taking the ball round the keeper he couldn’t quite get a shot away. Henry Spalding and then Kotwica combined on the 11th minute, but Kotwica’s effort was deflected away. From the corner Ty Duffus had an effort blocked close in. Martin Horsell was called into action on eighteen minutes with a good save away from a dangerous looking cross as Tivvy attacked for the first time in the game.

Marine were looking the better of the two teams and should have taken the lead when Ryan Campbell’s shot was palmed away by keeper Lewis Williams and fell to Kotwica, but he put the ball wide from six yards. This was quickly followed by another strong run, this time from Spalding but he scuffed the shot wide. Just when it seemed a goal was inevitable it came – for the hosts! Totally against the run of play in only their second meaningful attack the ball was whipped across the goal to find the onrushing Chukwuka Isequan at the back stick who picked his spot perfectly to make it 1-0 in the 25th minute.

Marine responded instantly with home keeper Williams then pulling off a double save from the lively Kotwica from two decent efforts. With the half coming to an end, it was a real head scratcher. Marine were dominating territory and possession and chances but somehow found themselves behind.

Tivvy had the first chance of the second period when a shot by Dan Hayfield was deflected behind by Tyrone Duffus, defending well but Marine were soon back into their stride again putting pressure on the home goal. In the 51st minute after some good pressure from a corner Ryan Campbell’s shot deflected up and Zack Kotwica was the fastest to respond prodding home with a clever finish to level up the tie and no more than Marine deserved.

It then looked like Marine had taken the lead when Henry Spalding poked the ball through the keepers’ legs to net but he had just strayed offside. The game then petered out somewhat. Tivvy gained more possession, but Marine were looking solid in defence. Chris Zebroski entered the fray with 20 minutes to go coming on for Frankie Artus, who had returned to the starting eleven for the first time after coming off at Tiverton six weeks earlier in a league game.

But the big chance to win the cup tie came for Marine with 10 minutes left on the clock, when the ball dropped to Henry Spalding on the edge of the box, with only the keeper to beat, but he fired high over the top when well placed. This was followed up swiftly with a good run and shot from Ryan Campbell which narrowly went over the crossbar. The final chance of the game for Marine fell to Lewis Hall, who after a strong run, couldn’t get enough power into the shot and Williams saved. The last moment of note came when Kotwica burst into the box deep in injury time and went down but nothing was given. It was a tough call and video evidence afterwards looking as though it was definitely a foul and possibly a penalty?

So, the game was to be decided on spot kicks. The first three was easily converted by Morison and Hatfield for the hosts and Kotwica for Marine. Henry Spalding then sent his high over the bar and the pressure was increased as Tivvy made it 3-1 through Landricombe. Ryan Campbell kept the pressure alive with a well taken kick before Jordan Lam made it 4-2 to the hosts. Brad Hooper kept the game alive by scoring his and the scores were levelled after Horsell saved Egan’s effort and Michael Hopkins excellent spot kick made it 4-4 to take it to sudden death. Belsten put his away for Tiverton, but unfortunately Zebroski hit his penalty low and directly down the middle and Lewis parried it away to send the hosts through to the next round.

Overall, a good display from a weakened side against a tough opponent and Marine will take much heart from the display whilst hoping to have a few more bodies available at the weekend when we take on Dorchester Town at home. A special point of note was the excellent set of officials on the night, they let the game flow and they were very much helped by two sides playing in the right way with very little gamesmanship on show which was quite refreshing. Well done to all!

Man of the Match: Zack Kotwica