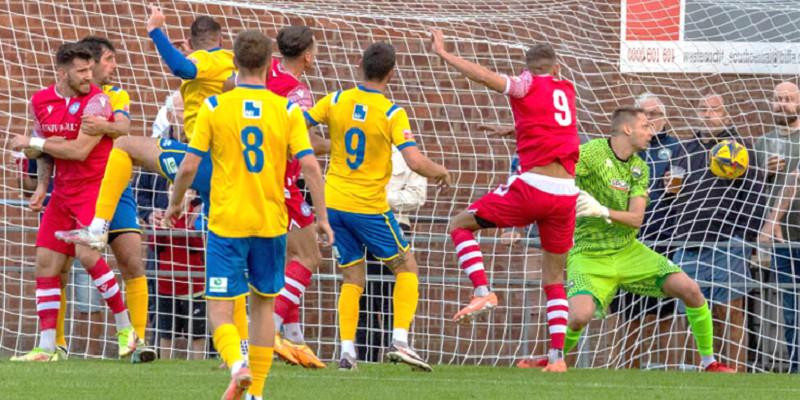 OUT OF LUCK AT THE BOROUGH

Swindon Supermarine travelled away for their first midweek action of the new season when they visited Gosport Borough for a Wednesday night fixture knowing a win would keep them top of the table. The gaffer unsurprisingly kept faith with the winning team for the weekend with the only change being Leon Morrison coming in on the bench for Jack Stanley.

With some early pressure Marine muted the large home contingent and it was no shock when after a succession of corners they took the lead on the 16th minute. George Dowling’s in swinging corner found the head of HARRY WILLIAMS who made no mistake for his third of the campaign. Gosport Debutant Jewitt-White then received the first card of the match for a foul on Williams before a shout for a spot kick for the hosts was rightly waved away, with Baggie going down theatrically after a strong but fair shoulder from Duffus.

Conor Johns did well to punch away from a corner under pressure just after the half hour but another in swinging Dowling corner was just flicked over by the home keeper O’Flaherty. Williams then came close to doubling his tally, just putting over at a stretch from a corner. Then out of the blue in the 39th minute to the break JEWITT-WHITE picked up the ball wide of the left after a clever run by Baggie, looked up to curl a cross which deceived John in the Marine goal and found the inside of the net, just inside the far post. A fortuitous leveller which was harsh on the visitors who hadn’t really given their opponents a sniff until then.

Into the second period and Lewis Hall was looking lively down the left wing and before long another Williams header just squirmed wide after a deflection. Johns was starting to come under more pressure however making some good catches before Turl had to put in a last ditch challenged followed by a good clearance from Edge after Johns seemed to have the ball kicked out of his hands. The move ended with a long range strike just over from full back Kavanagh.

Tom Sharpe went into the book on the hour before another good catch low down from Johns in the Marine goal from the free kick. Kavanagh and Jewitt-White then created another chance but another a top save from Johns kept them at bay but from the corner HARVEY BRADBURY wasn’t picked up and he scored from close range to put the Borough ahead with twenty minutes to go. Rew was booked for Gosport on 76 minutes after a clear dive in the penalty box before the first Marine changes. Hooper and McDonagh replacing Spalding and Kotwica.

Skipper Mat Liddiard then made his first appearance of the season replacing Edge in midfield. Marine kept up the fight and into injury time James Harding was denied by the keeper who beat away his shot, the rebound fell to McDonagh but it was a difficult chance and he couldn’t keep the shot on target. It looked to be an unlucky defeat but a late final blow. Gosport substitute Kaba went down in the box after a challenge by Brad Hooper who seemed to have won the ball but the referee awarded a penalty in the 95th minute. HARVEY BRADBURY stepped up to smash the ball straight down the middle and in off the bar. An unreflective scoreline of how well Marine had battled away from home against one of the league’s top sides.

Marine will need to not dwell on this one, defeats are always going to happen in a season, but instead focus on the positives at how well they had played in the first half away from home and build from there. Next up the Met Police at home on Saturday and another big challenge.

Fans Star man: Harry Williams another goal and he caused the home backline issues all night.