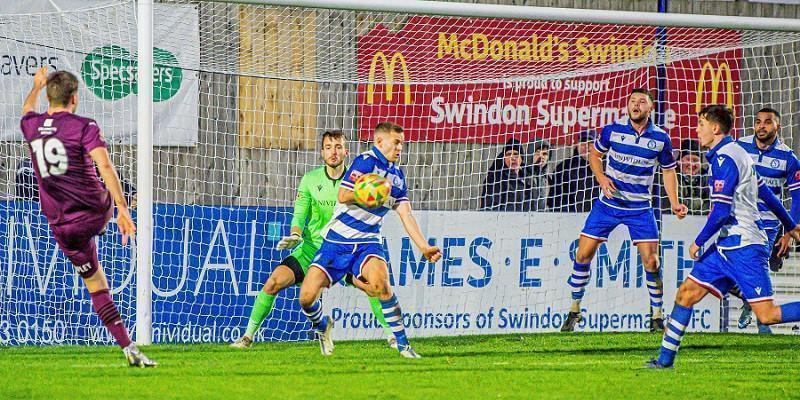 Swindon Supermarine took on National League South title chasers Dartford on Saturday afternoon in Round 2 of the Isuzu FA Trophy. With cup tied due Joe Tumelty and Will Tunnicliff unavailable Brad Hooper and Zack Kotwica returned to the starting line up with Ryan Campbell dropping back to left back once more. 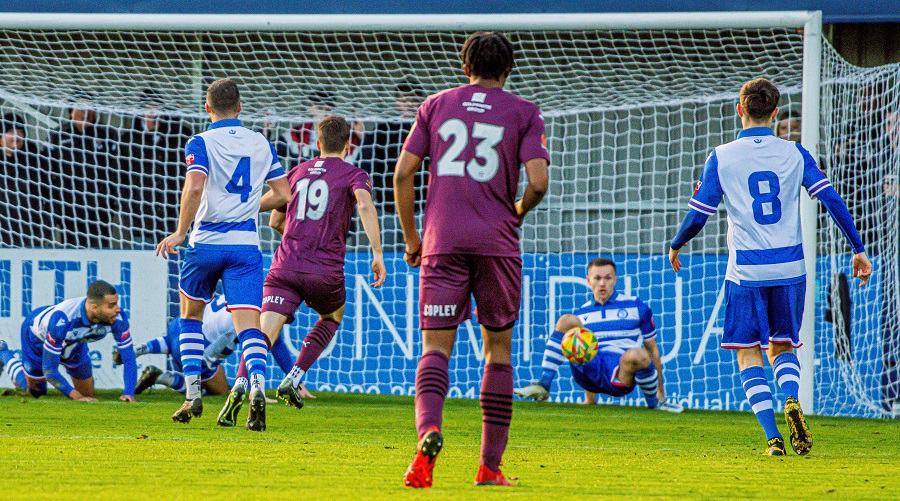 As expected, the higher division side started well and there was early panic in the Marine box as Luke Coulson and Charlie Sheringham looked to weave their way past Liam Armstrong in the Swindon goal, but skipper Mat Liddiard managed to hook the ball away just in time. But as the game settled down Marine looked comfortable against their higher opposition with Harry Williams and Zack Kotwica looking lively. 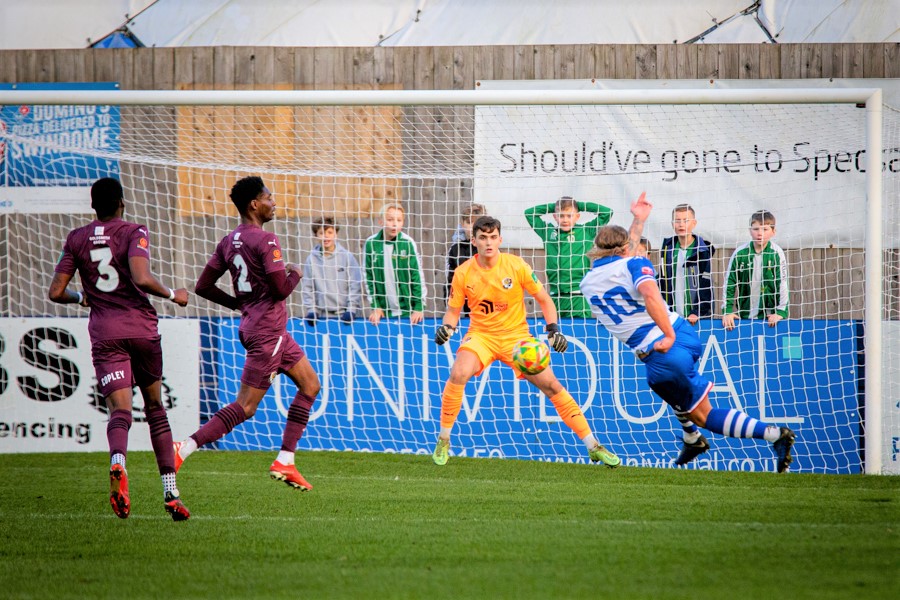 It was no shock when Marine broke the deadlock on fifteen minutes as Zack Kotwica beat his man on the wing in style, hurdling the defenders challenge and then putting over a pinpoint cross for GEORGE DOWLING to volley home from the edge of the penalty box. 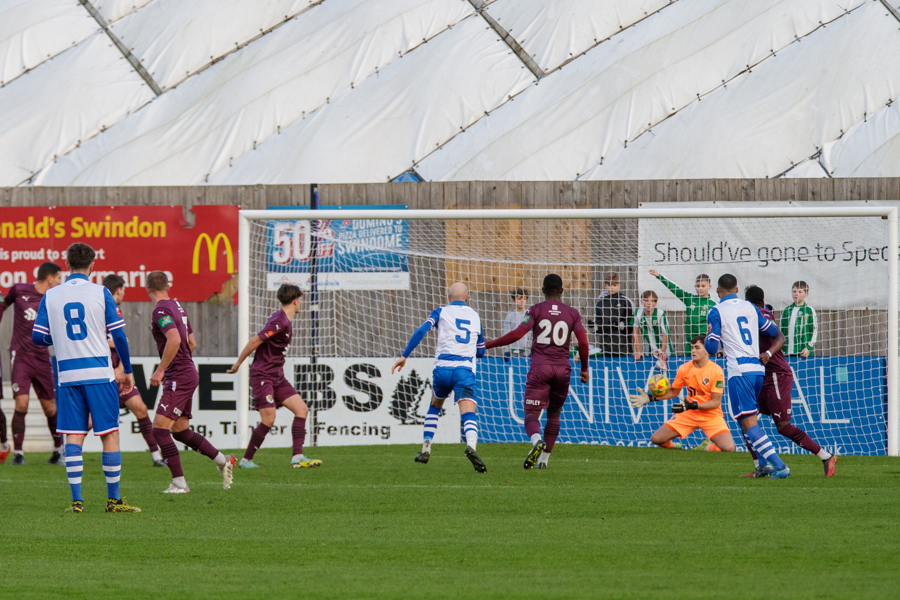 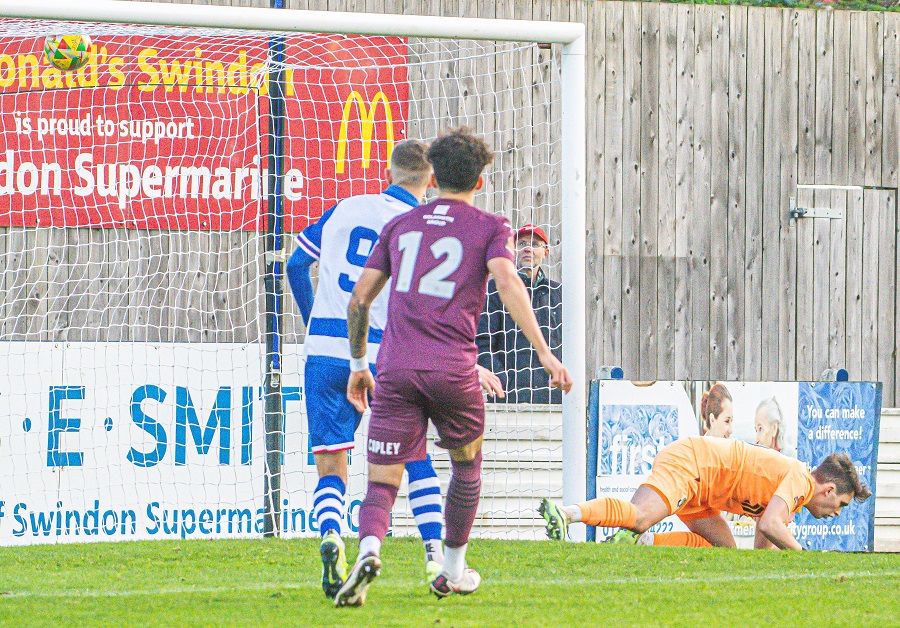 From that moment on it was one way traffic for Supermarine as they began to dominate the play. On 22 minutes after Harry Williams, who gave the Dartford backline a torrid time all game, was brought down on the edge of the box. GEORGE DOWLING, who now had a taste for goal swung the free kick over the wall into the corner and the Dartford keeper Tom Wray could only push it over the line. An amazing start to the game for Marine. Zack Kotwica and Harry Williams then took over for the rest of the half. Darts keeper Wray pushed a Kotwica shot just wide on the half hour before late on a Williams shot was deflected for a corner and Kotwica’s header from the corner was just over the bar. 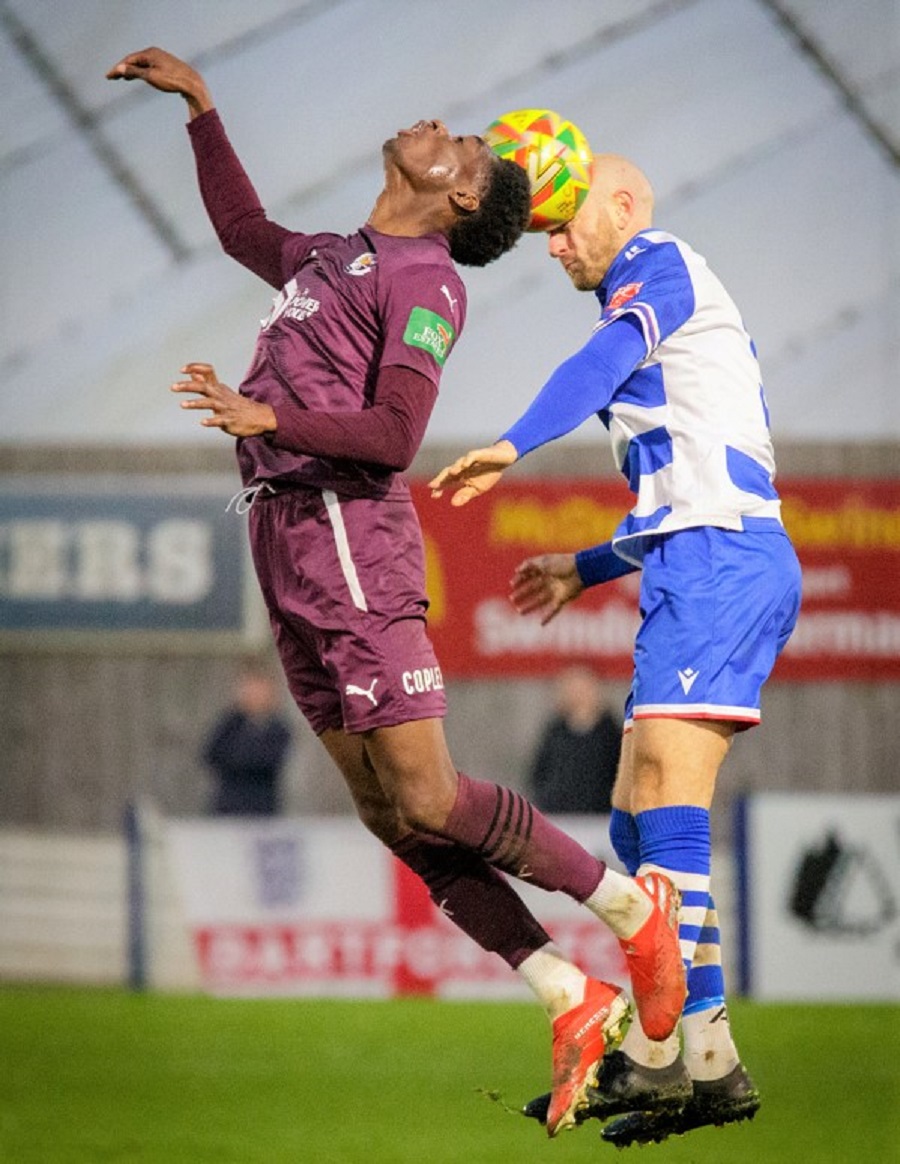 An amazing half from Swindon but could they keep it going in the second period. Manager Alan Dowson opted for a double change for the visitors with Davide Rodari and Marvin Herschel replacing Pierre Fonkeu and Josh Johnson. It made no difference as Marine came out for the second half on the front foot. 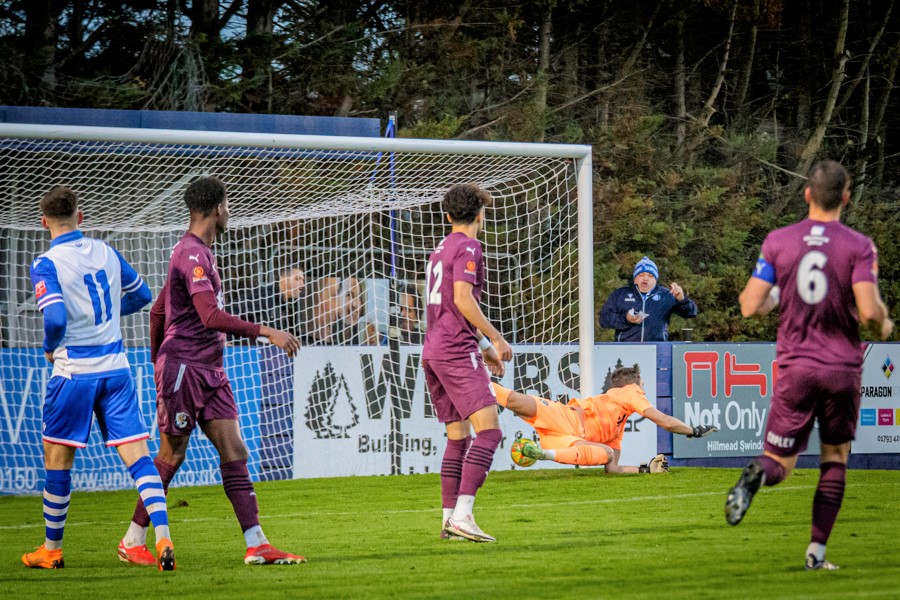 After some excellent hold up play by Williams again, he played the ball back to ZACK KOTWICA. The lively winger cut inside and curled a delicious shot into the far corner to make it 3-0 just five minutes into the second period. This was Zack’s fourth goal of the season and his third in the FA Trophy. He likes this cup competition, and he wasn’t finished there. 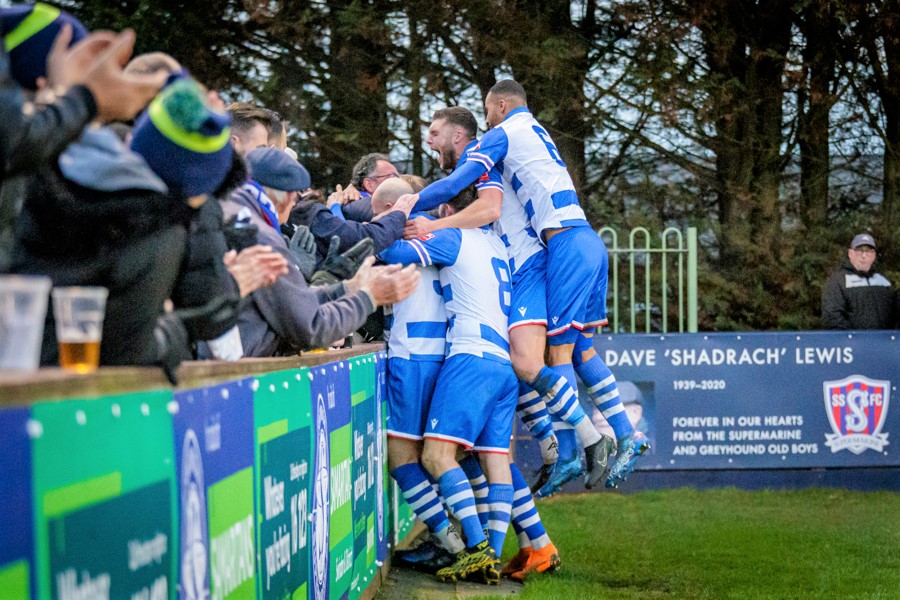 On fifty-five minutes and after a change of passes with Williams he laid the ball back to GEORGE DOWLING who hit a 25-yard blockbuster and goal of the season contender to complete an amazing hat-trick for the combative midfielder, who until today hadn’t found the net this season. 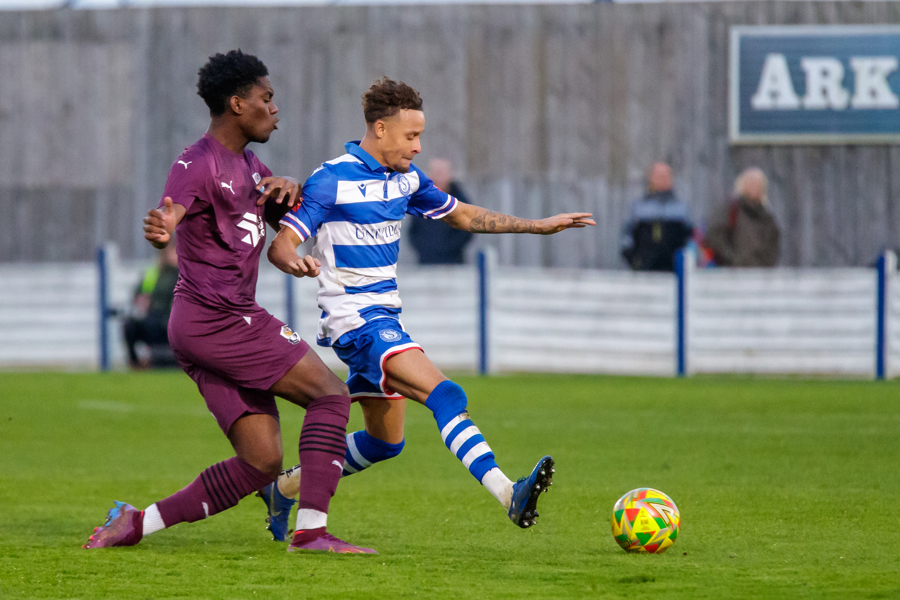 This effectively sealed the tie as the home side comfortably saw out the game. Tyrone Duffus saw yellow for a poor tackle on the hour and George Dowling went off to rapturous applause on sixty-two minutes to be replaced by Conor McDonagh. Keeper Liam Armstrong was barely called into action as the game went quiet and with Leon Morrison replacing Brad Hooper and debutant youngster Casey Spence-Harding replacing Henry Spalding the job was done. 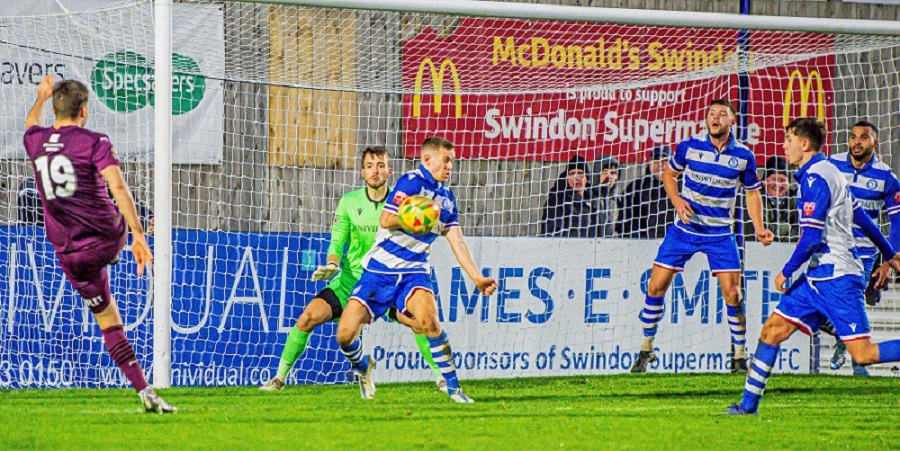 So, a top-class performance against one of the best sides in National League South and in three games in the FA Trophy this season Supermarine had now won by 3-0, 5-0 and now a 4-0 score line. Bring on the next round where the teams from the National League top tier arrive. The draw for the third round is on Monday afternoon. Next up Bemerton Heath Harlequins away in the Wiltshire Premier Shield on Tuesday (weather permitting) and then on Saturday home to Hayes and Yeading in the League. 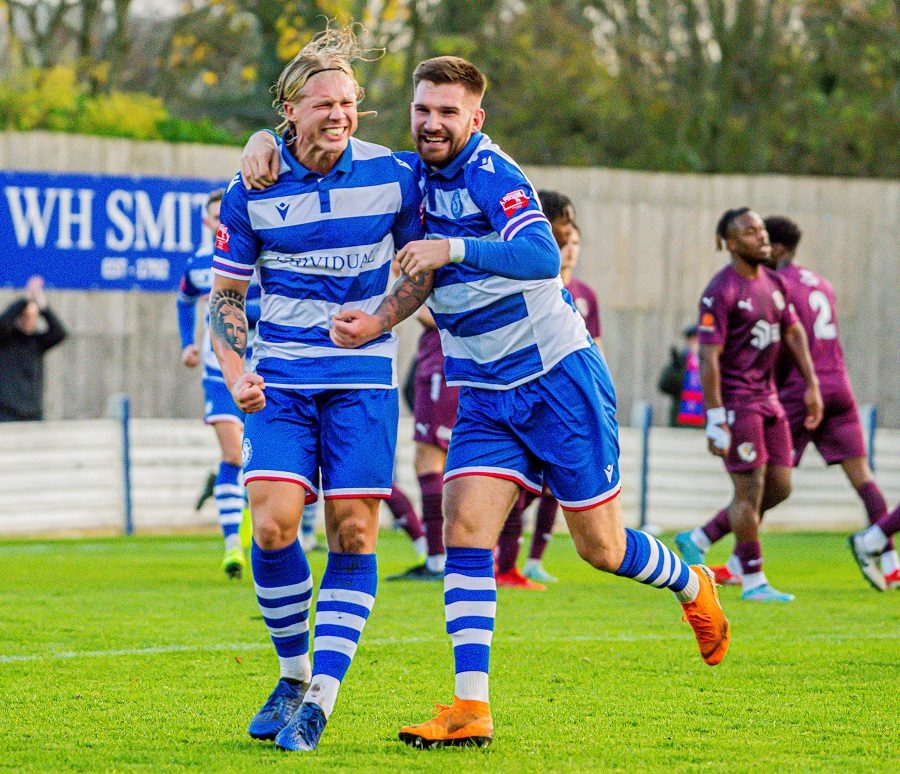