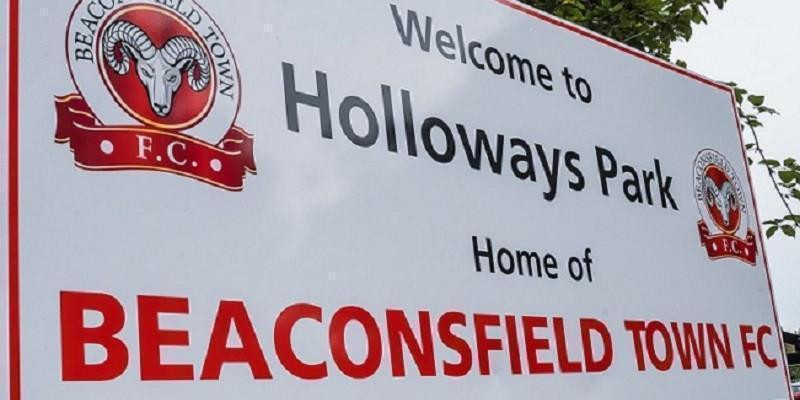 Swindon Supermarine were back on the road this Saturday when they made the trip to Holloways Road home of Beaconsfield Town now an artificial surface. Looking to keep the winning run going after two positive results in a week manager Lee Spalding opted to change to a back three with wingbacks for the first time this season in the league. This saw Tyrone Duffus and Frankie Artus return to the starting line up. Missing out with injury were George Dowling (thigh strain) and Chris Zebroski (illness).

After a minutes silence to remember those who had fallen the game got underway and Marine flew out of the traps full of confidence.Zack Kotwica forced an early corner but it came to nothing. An early bang on the head for Dan Ball halted proceedings but he was ok to carry on. Jamie Edge’s excellent free kick soon after just eluded the on rushing attackers and just as it seemed an early goal would arrive, and it did, at the other end!

In their first attack the Rams broke away down the left and winger OLLIE McCOY cut inside Michael Hopkins and with time and space curled his shot into the corner of the net after just six minutes gone. They quickly followed this up with a dangerous ball in but striker Nathan Minhas flicked it just past the goal. 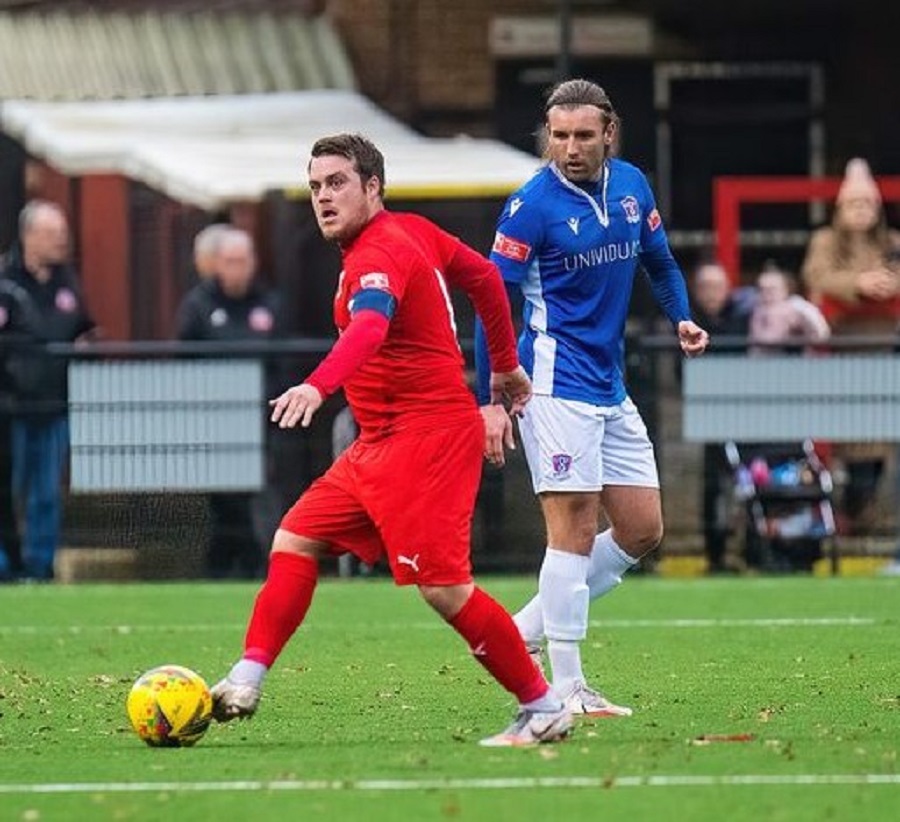 Marine responded well though. Conor McDonagh fired in a stinging shot which was superbly pushed away by Aymen Azaze in the home goal. The ball fell to Michael Hopkins but his effort hit the post and went out for a goal kick. Kieran Phillips then got in on the act, firstly with a bobbled attempt which went wide before getting on the end of a Lewis Hall cross to net superbly only for the joy to be short lived by the linesman flag for offside

Beaconsfield Town then went down the other end to test keeper Martin Horsell who did well to deny Nathan Minas with a save low down, but Marine were quickly on the attack again looking for the leveller. Skipper Mat Liddiard headed a Jamie Edge free kick just over the bar and once again home keeper Azaze came to the home teams rescue when Conor McDonagh had his effort blocked by a defender with the rebound coming to Mat Liddiard to follow up but his effort was saved at the near post.

Frankie Artus had a go from long range on 27 minutes but it was over the top with McDonagh having another go which also went just wide on the half hour. With Marine dominating the chances once again it seemed a goal was imminent and it yet again arrived, at the other end although in controversial circumstances. On the break the referee awarded a very soft free kick to Beaconsfield much to everyone’s surprise. Before Marine could respond the impressive Scott Donnelly took it quickly to play in Ollie McCoy who hit it across the box for NATHAN NINHAS to get the faintest of touches to slot it past Martin Horsell for a 2-0 lead. 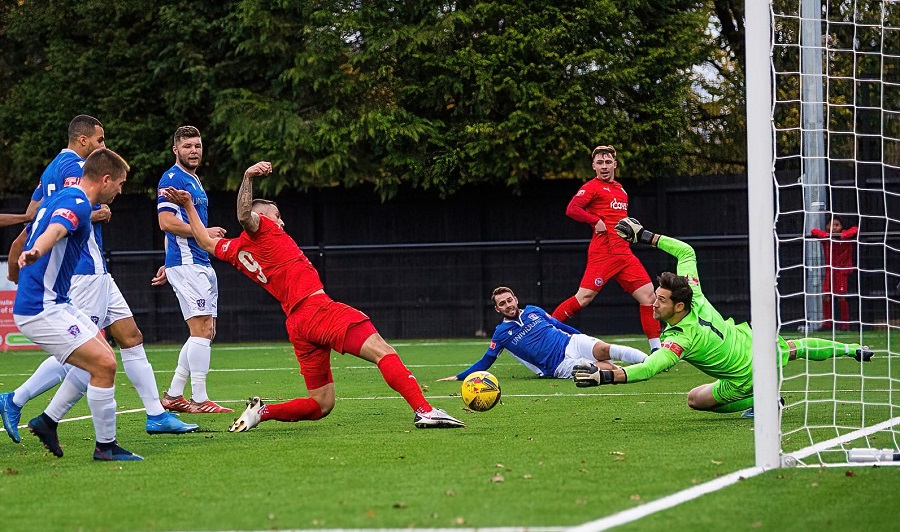 The visitors were shell shocked and despite an effort from Kieran Phillips tipped over the bar unsurprisingly lost confidence going into the break with winger Kaine Kennedy-Sinclair fizzing a low shot wide. It was no shock then when the Rams added a third before the break to effectively seal the three points. An excellent team move saw Ollie McCoy link up with the Minhas brothers, Nathan and Aaron with NATHAN NINHAS sliding the ball over the line on 41 minutes.

A shocker of a half, on another day with more luck Marine would have been in front but with nothing whatsoever going their way were 3-0 down and at a low ebb. Lee Spalding rang the changes at half time, switching to a 4-2-4 to try and salvage something from the game. Pierce Mitchell, Brad Hooper and Ryan Campbell entered the fray with Jamie Edge, Frankie Artus and Michael Hopkins taken off. Despite a determined and lively start for Marine in this period the fragility remained and Beaconsfield now looked super confident putting together the move of the match. Some excellent one touch play eventually saw OLLIE McCOY expertly side footing the ball home with aplomb from the edge of the box on 57 minutes giving keeper Martin Horsell no chance. With the score now 4-0 it was truly game over.

The hosts made three changes of their own and perhaps some complacency saw Marine finally get their chance on 69 minutes when Zack Kotwica was brought down in the box by Jordan Aghatise for a stonewall penalty. Brad Hooper stepped up and his shot was low down to the keepers right but Aymen Azaze produced a save and with the rebound falling back to Hooper he somehow missed an open goal when he unfortunately scooped the ball over the crossbar with the goal at his mercy. This summed up the teams day! 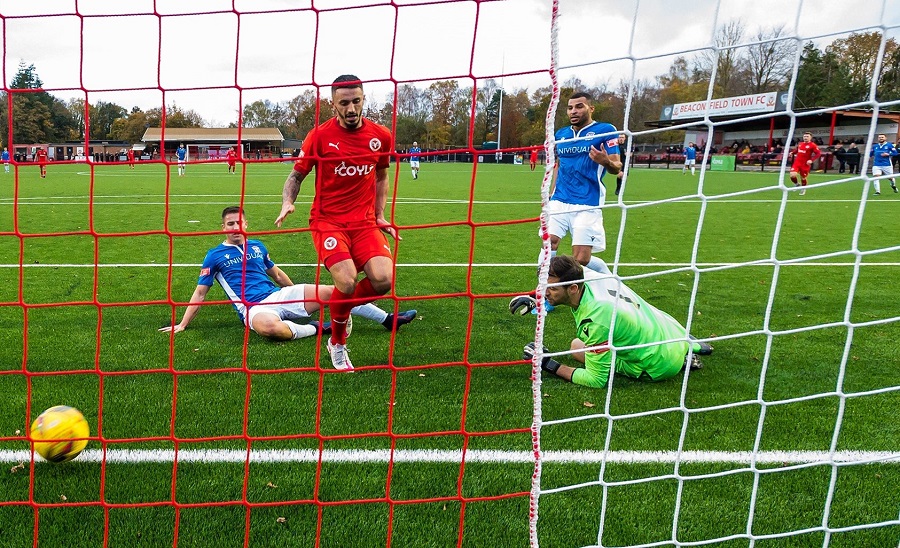 But one man who wasn’t to be denied was striker KIERAN PHILLIPS. Kotwica’s low cross into the six-yard box was snapped up by the striker who netted from close range for his third goal in three matches. This livened up the Marine side once more and Zack Kotwica, who performed well on the day, blasted another effort over the bar from jus outside the box. McDonagh’s deep cross just went past the foot of Phillips but the youngster netted again for Marine, running through and placing his shot in the corner of the goal but once again the joy was short lived due to a linesman flag. This one looked even tighter than the one in the first half – on another day a hat-trick for the young man!

With time running out Zack Kotwica’s cross just beat Duffus at the back post before Ryan Campbell’s excellent run and shot from 30-yards skimmed off the top of the crossbar and over. With five added minutes the final ignominy arrived when winger Ollie McCoy slid past Pierce Mitchell and with several Marine defenders and keeper Martin Horsell drawn to the near post a delightful floated cross over them saw Beaconsfield substitute DAN BRADSHAW run in to score the easiest of goals with a close range header into an unguarded net.

Overall a difficult afternoon to take in front of a good sized away following. The tactical changes had worked in allowing Marine to dominate the chances but defensively not so much as our fragility at the back seemed to cost us the game in the end. Although with some better luck with the offside goal and the harsh free kick awarded for the second it might have been a slightly different outcome? 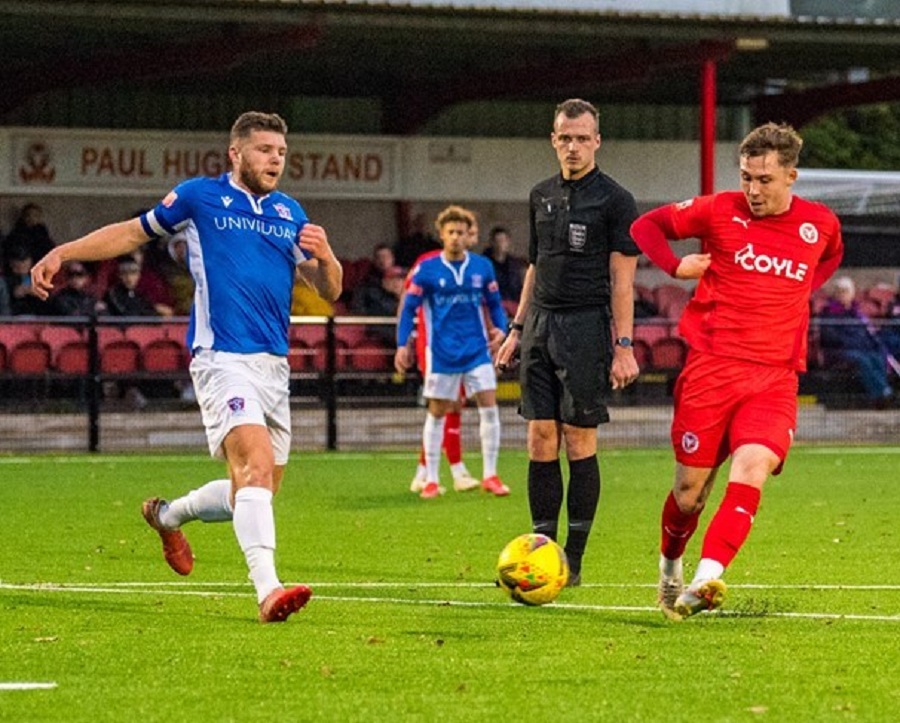 Once two behind Marine lost confidence, similarly to the Salisbury away game in the league and slightly crumbled instead of staying solid. Nevertheless we have to remain upbeat and trust in the management and players to turn it around, particularly with our home form to try and climb up the table. Next up however is another very long away trip on Tuesday night to Plymouth to take on Truro City.

Editor’s star man for Marine – Kieran Phillips – on another day a hat-trick?