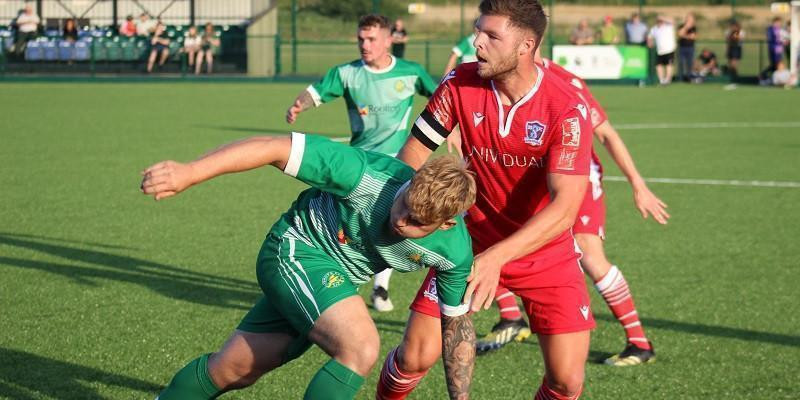 In the first of a weekend double header Marine travelled down to Gloucestershire to take on newly promoted Southern League Division One side Bishops Cleeve. On a pleasant night, and on the new 3G surface at Kayte Lane manager Lee Spalding shuffled the pack with first starts in preseason for newcomers Jack Stanley, Louis Morrison, Conor McDonagh and both the recent trialists.

It was initially a quiet start before the game sprung into life on fifteen minutes. After a bit of ping pong in the box the ball fell to Jack Stanley who teed up HARRY WILLIAMS for a finish close in to put Marine in front. Marine keeper Conor Johns kept the lead intact with a good punch away from a free kick soon after as Cleeve responded well to going behind. The hosts put a good chance past the post before Cleeve’s Jordan Annear somehow spurned a great chance to level on twenty-seven minutes. But JORDAN ANNEAER made no mistake just after the half hour though with a close in finish and the home side levelled up the scores. George Box came close to making it 2-1 to the home side but was let down again by some poor finishing.

Sam Turl replaced Jack Stanley who came off with a groin injury on thirty-five minutes before Marine were indebted to Trialist A who cleared superbly on the line after Connor Johns had been lobbed, a goal saving stop from the left back. Harry Williams broke through just before the break but was denied by a last ditch tackle. Overall a good half by Marine but the home side battled back strongly after going behind.

Marine started the second period strongly and a great team move early on should have increased the scoreline but Williams somehow fired over. But just a couple of minutes later on fifty-five minutes, trialist A put in a great whipped cross and HARRY WILLIAMS made amends by poking home superbly at the near post, a real poachers finish for his brace.

On the hour changes galore as Tom Sharpe, Lewis Hall, Ryan Campbell and James Harding entered the fray in place of trialist A, Jamie Edge, Williams and Zack Kotwica. The game died down slightly with all the alterations on both sides but with twenty minutes to go trialist B appeared to be hacked down but play was waved on and with the visitors hesitating Cleeve substitute HARRISON REEVE Reeve broke away and neatly netted low past Johns to level the scores.

Skipper Mat Liddiard should have put Marine back in the lead with ten mins to go but his free header from a corner was straight at the home keeper Lewis Clayton. A slip up at the back by Tom Sharpe nearly let Cleeve in for a winner but Connor Johns produced a great stop low down to preserve the scoreline and it was a crucial stop because two minutes later on eighty-four minutes CONOR MCDONAGH, who had a fairly quiet game made up for it with a wonder goal. He received the ball 25 yards out and smashed it into the top corner, giving the home keeper no chance and that was 3-2 to Marine.

A late change saw Lew Hutchinson from the Development Team come on for Trialist B and he was straight into the action with a minute left. Another strong challenge in the box on him was rightly punished with a spot kick. McDonagh stepped up but hit it weakly and the keeper made an easy save as he dived low to his right. However the whistle blew shortly after and Marine would be content with the 3-2 win on the night. A good run against a physical opponent on a difficult surface and another invaluable match for the team. A real test less than 24 hours later to come on Saturday with the visit of Forest Green Rovers.