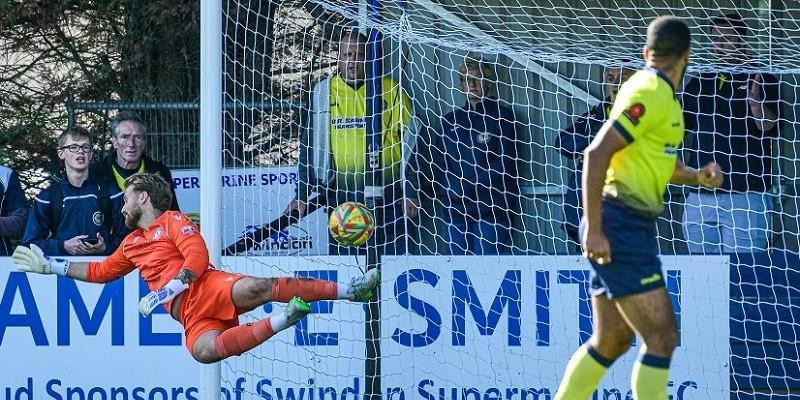 Farnborough progress into the next round of the FA Cup having comprehensively outplayed Swindon Supermarine. Whilst the visitors were impressive this was a strangely lacklustre performance from the home team. There was none of the tenacity, quality, or zest that has been the hallmark of most of Marine’s matches this season. From a Swindon Supermarine perspective this was very much the proverbial bad day at the office.

Farnborough started with gusto and could have opened the scoring in the 4th minute when they opened up the Marine defence. However, Jordy Mongoy hit the post from close range when he probably should have scored. The visitors did not though need to wait long to open their account. In the 6th minute the experienced RICKY HOLMES hit a low twenty yard shot towards goal that found its way into the far corner of the net. 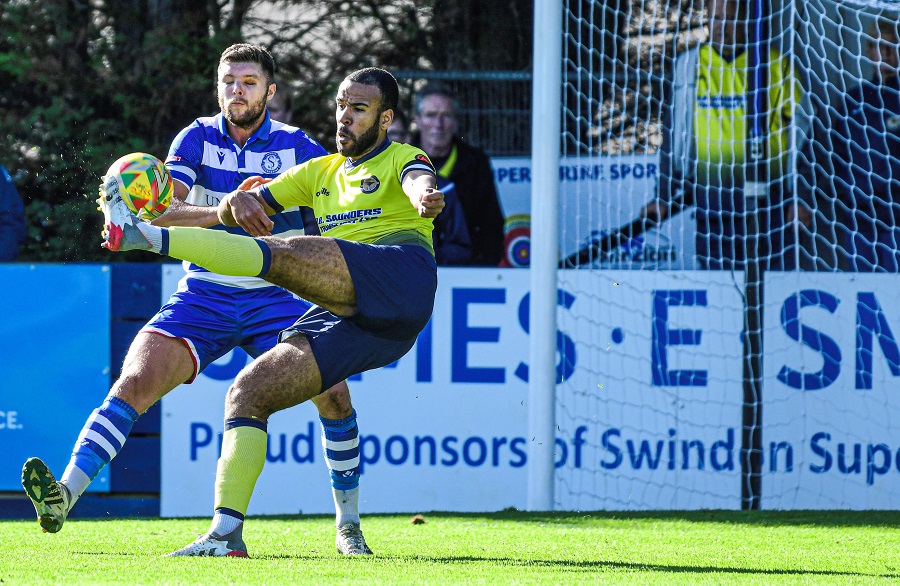 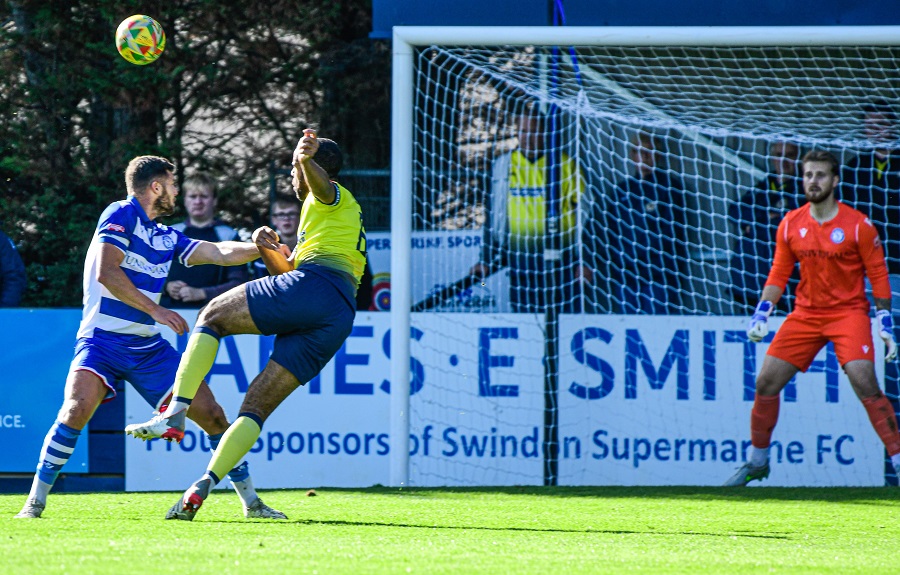 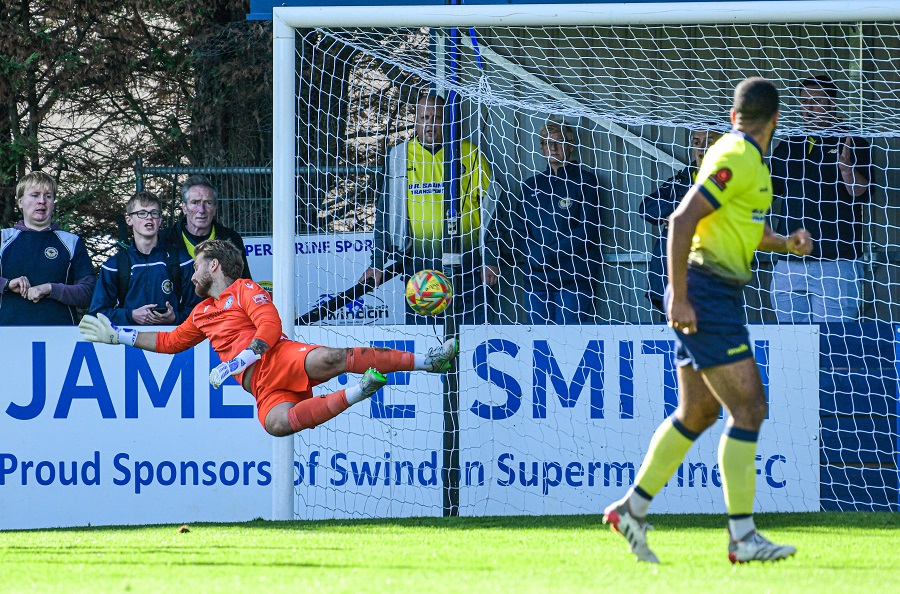 Farnborough now had a momentum building and went close again in the 10th minute when Jordan Neville Williams back post corner found the head of Kevin Lokko whose effort was well saved by Connor Johns. Still Swindon Supermarine struggled to get any type of foothold in the game. Indeed, Farnborough attack followed attack. It was thus no surprise when the visitor’s doubled their lead in the 19th minute. From a set piece the visitor’s KEVIN LOKKO, some 15 yards out and with his back to goal, conjured an overhead shot from nowhere that hit the post before rolling into the other corner of the goal. A top quality goal. 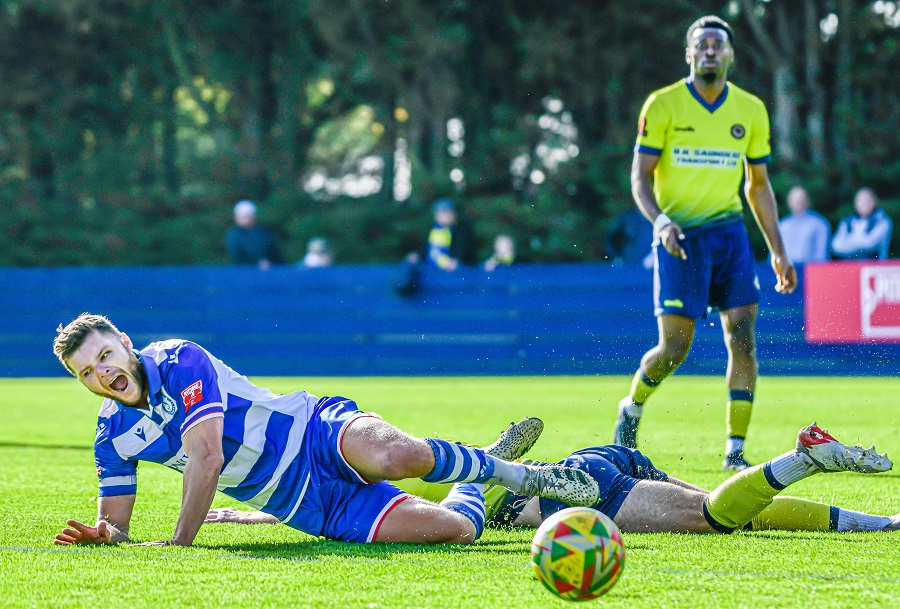 Some three minutes later the visitor’s Jordan Mongoy burst into the box leaving defenders in his wake. As he approached goal, he got a shot away that thankfully, from a Marine perspective, hit the side netting. In the 32nd minute the visitor’s Olly Pendlebury was shown a red card following a heavy tackle on Mat Liddiard by the halfway line. Whilst the player was disappointed to see red the home support hoped this might be a moment that offered their team a way back into the game. 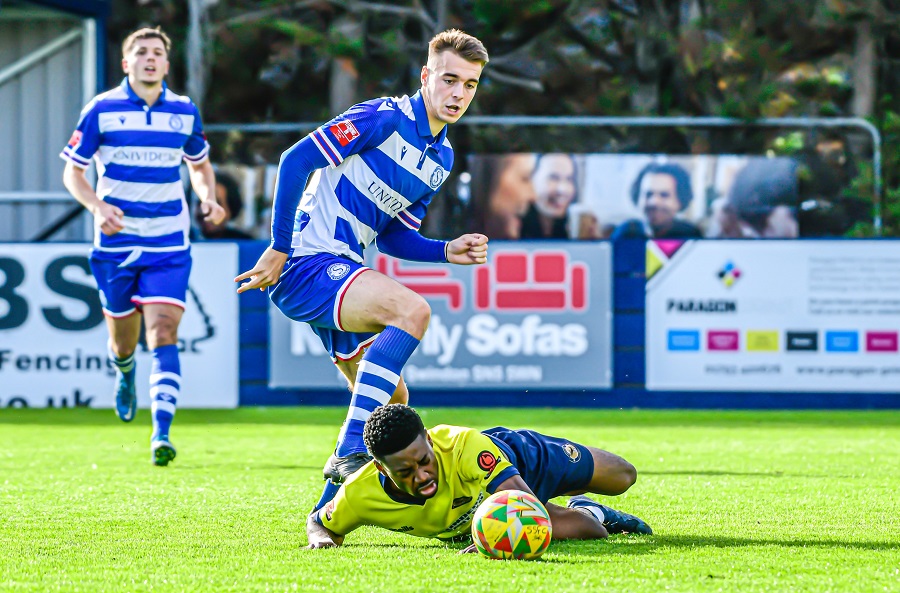 This was not though the case and even with ten men the visitors were still creating the clearer chances. Seven minutes before half time Farnborough’s Hisham Kasimu advanced on goal and successfully lobbed the advancing keeper Connor Johns. A goal seemed inevitable but was not to be thanks to Tom Sharpe’s excellent goal line clearance. At the half time whistle not even the most loyal of Swindon Supermarine supporters could have argued that Farnborough were not worthy of their two-goal lead. Marine had been comprehensively outplayed and were unable to muster a shot on target. 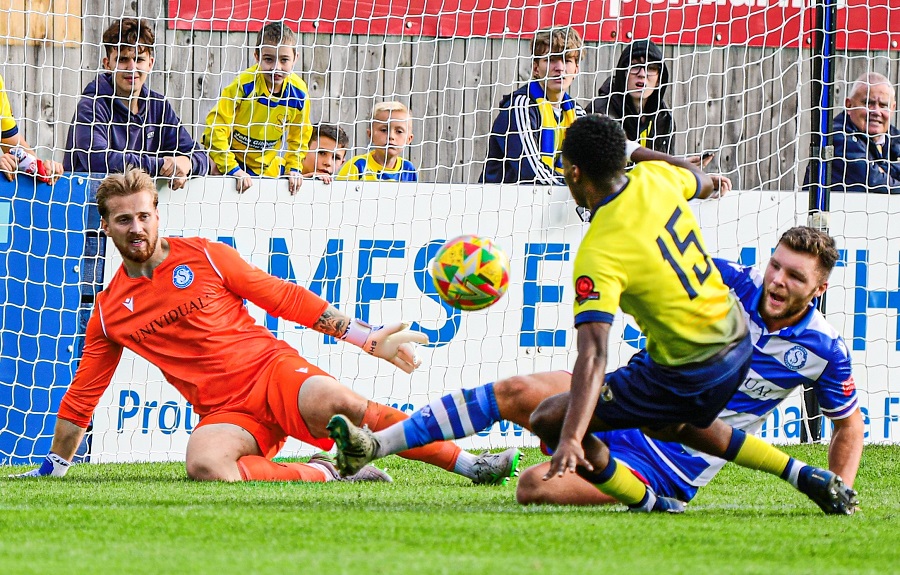 The early skirmishes of the second half were a little more end to end. Still though the visitors were creating the better openings. In the 51st minute a long ball from Kasimu saw Jordan Mongoy beat his man but then blast over the bar. Then in the 68th some good passing between Mongoy and Kasimu created an opening for Page inside the box, but his shot slipped just wide of the post. 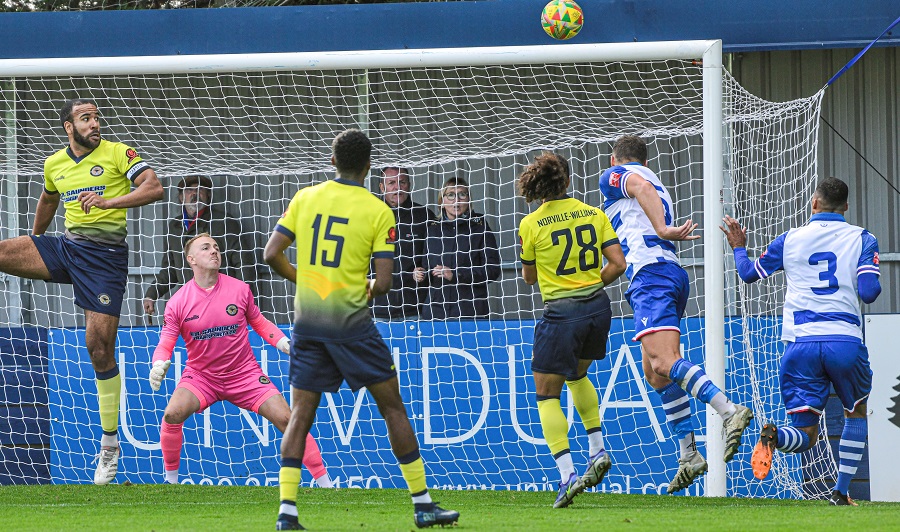 A minute later Marine had their first clear chance to get back into the match. Ryan Campbell hit an excellent cross to the back post. Mat Liddiard had got himself free of his marker but could not keep his close-range header down and it went over the crossbar. His disappointment at not converting was evident as he held his head in his hands. 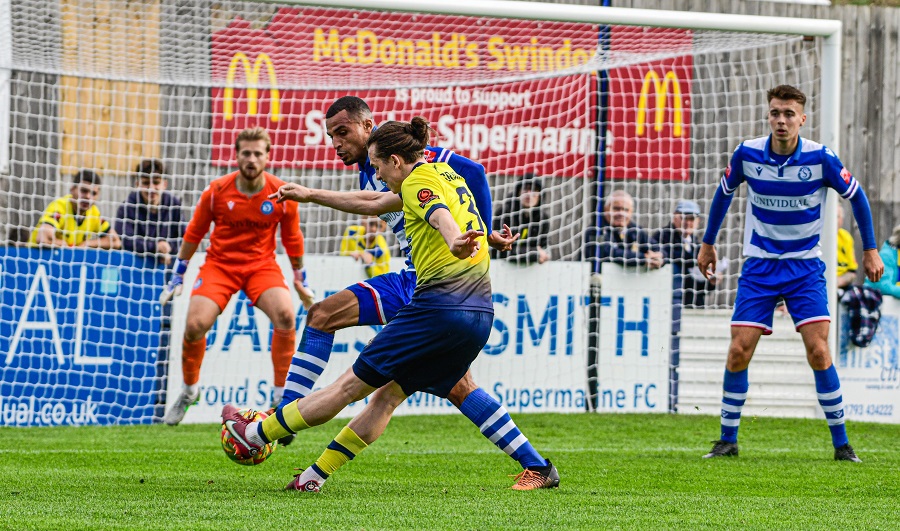 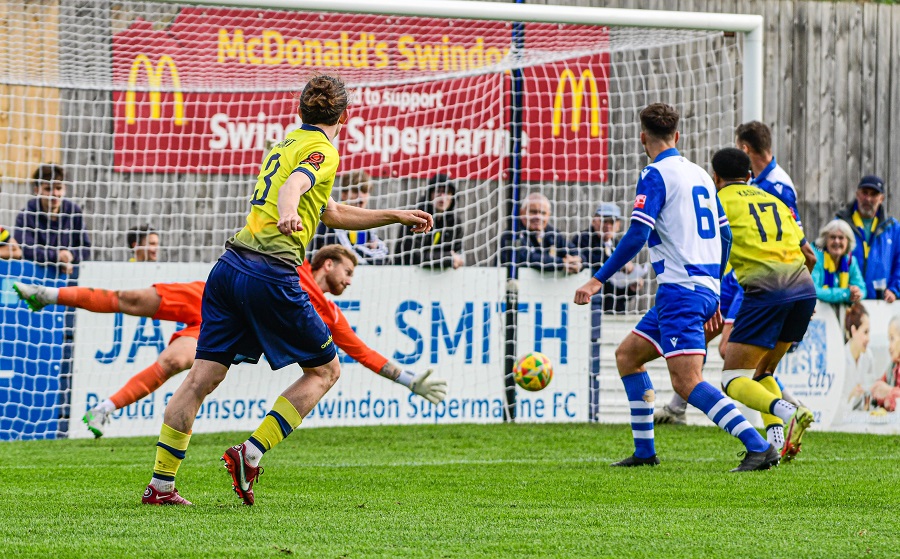 In all honesty the game now had a more even ebb and flow, but the ten men of the visitors were most certainly holding their own and still looked the more likely to score. Paige and Deering both had shots on target that were saved by Connor Johns. However, it was no surprise when they extended their lead in the 68th minute with a deft close-range finish from fullback FREDDIE GRANT. Some two minutes later it was 4-0 when JON PAGE pounced on a defensive mistake to tap the ball home from close range. 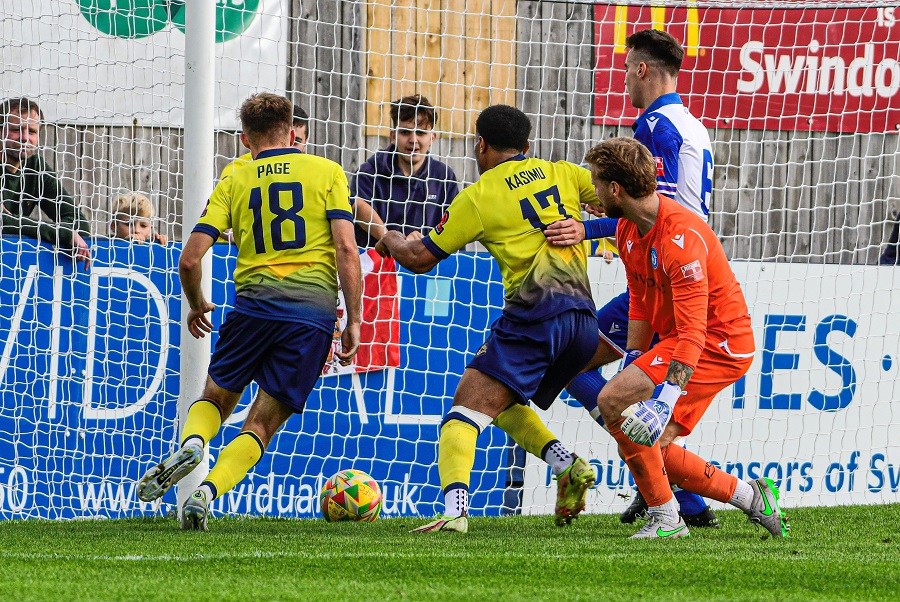 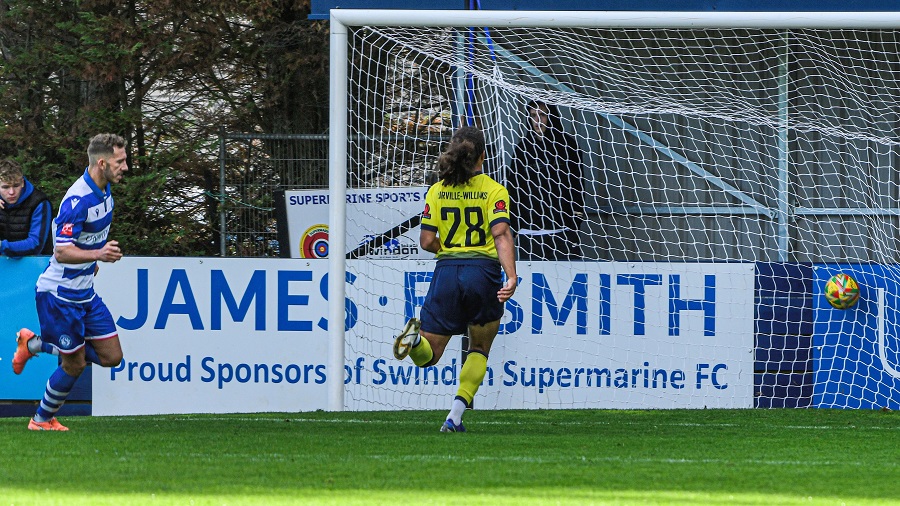 The final twenty minutes promised to be a tortuous slog for the home team. However, they got one back when HARRY WILLIAMS beat the offside trap and, as he entered the penalty area, expertly slid the ball past the advancing keeper. A calm and composed finish from the Marine man. Any optimism that this might see the home team rally in the final minutes was swiftly quashed when the visitor’s Omar Rowe played through LIAM FERDINAND who finished adroitly from close range to make it five. 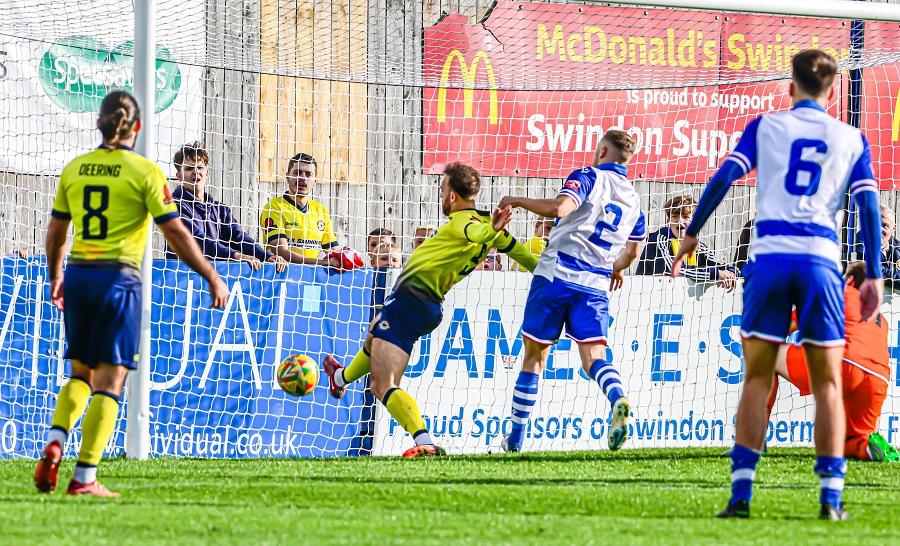 The final minutes of the match quietly petered out as the home side struggled to create any further openings and the visitors comfortably sat on the lead they had secured. At the final whistle Farnborough could justifiably be pleased with their performance. They defended resolutely, won the key midfield battles, and finished their chances well. 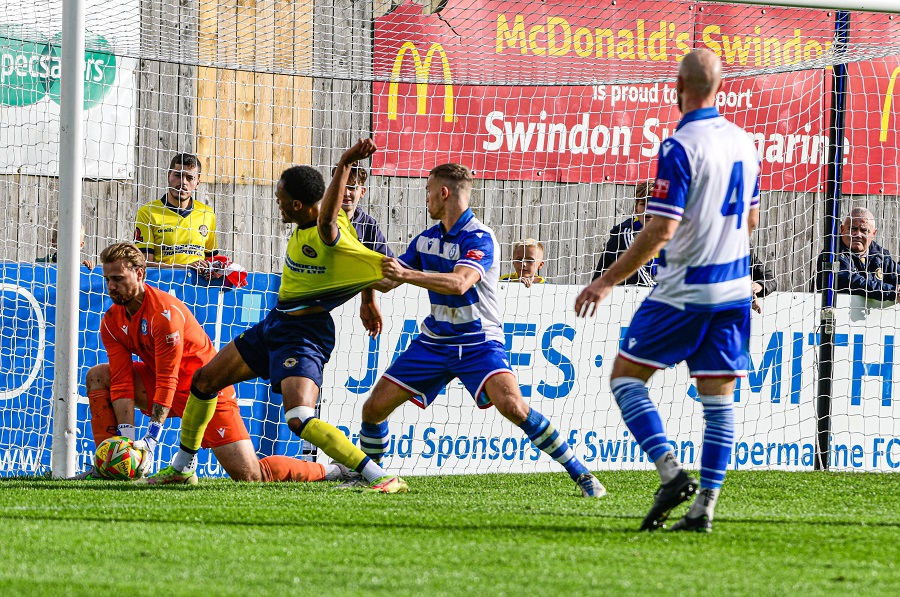 From the photo it looks as though Marine were lucky not to conceded a penalty?
Photo © Motion Sport Photography Match Album

For Marine this was conceivably the poorest performance this season. Not because they lost to a National League side but because too many players performed at a level that seemed well short of their best. The Marine players are an honest bunch, and they will know they can be better than the performance they put in during this match. 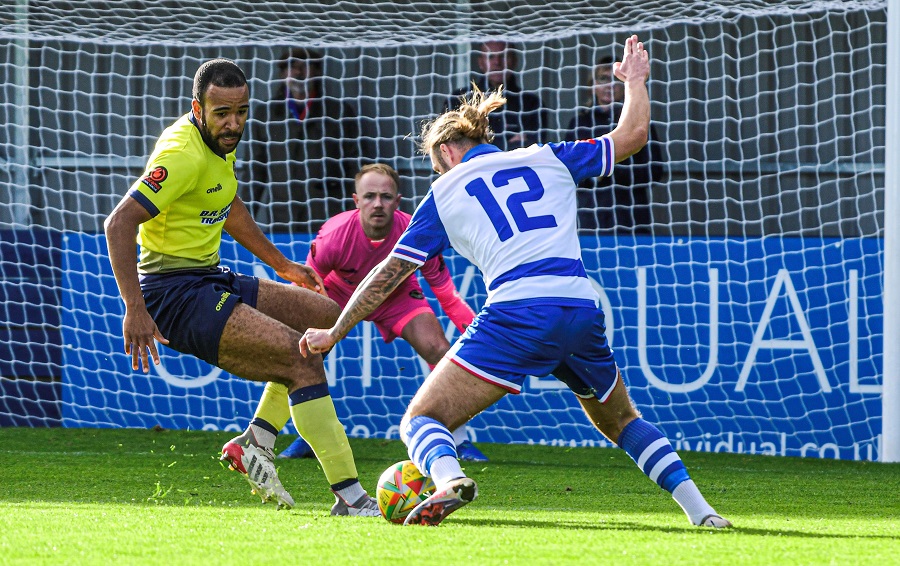 With regards to Farnborough all the best in the next round of the FA Cup – your victory was well deserved. For Marine the chance to learn the tough lessons of defeat and prepare for a local derby in the FA Trophy against Cirencester Town next Saturday. As Confucius said, “our greatest glory is not in never failing but in rising every time we do.”