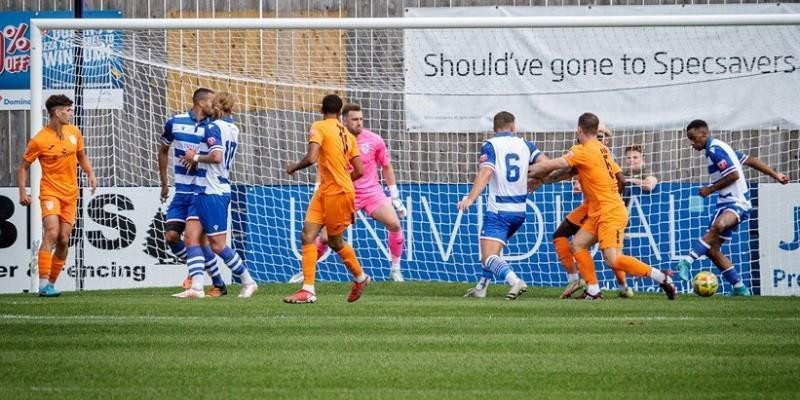 MARINE BLAST BACK WITH A VICTORY

Swindon Supermarine took on the well supported Merthyr Town on Bank Holiday Monday looking to gain some joy over the weekend by bouncing back from a defeat at Salisbury forty-eight hours earlier. Manager Lee Spalding freshened the side by making four changes, George Dowling, Tom Sharpe, Connor McDonagh and Sal Abubakar all coming in with Jamie Edge, Brad Hooper, Zack Kotwica and James Harding dropping to the bench. 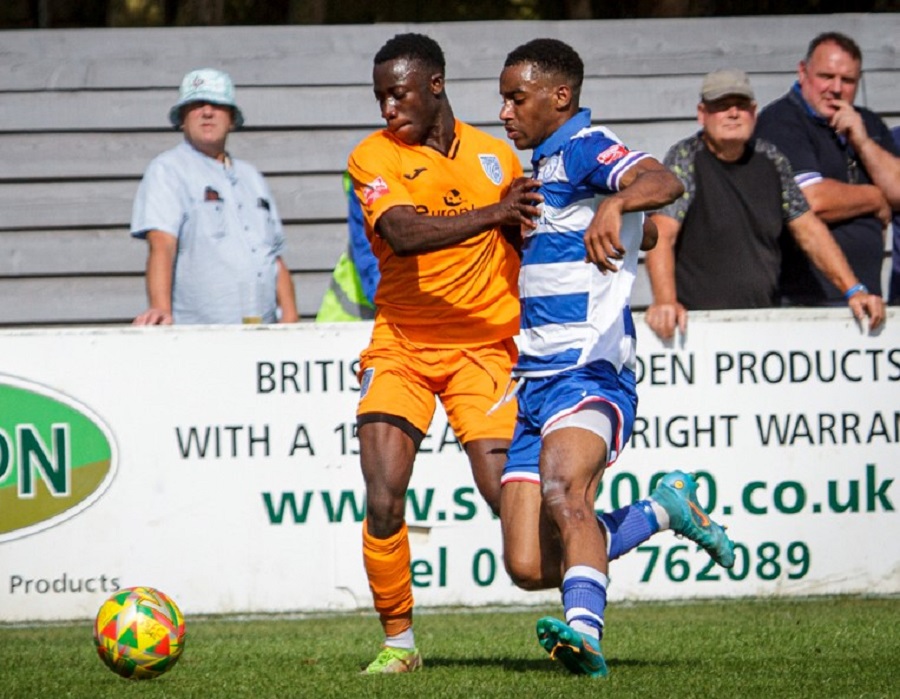 Marine started brightly as they looked to keep up the 100% winning record at home. Tom Sharpe blasted over early doors and then Harry Williams flicked a header from a Henry Spalding cross just wide. The first foul of the game on twelve minutes also saw the first booking as Tom Sharpe was shown the yellow carded. Then Bubacarr Sama also saw yellow for hauling back Marine’s Sal Abubakar. The resultant and dangerous free kick in somehow eluded everyone in the box. The first strike by the Martyrs was fired well over by Camden Duncan. Then on twenty minutes Marine took the lead. Another free kick caused confusion at the back and after the ball was deflected off a Merthyr defender to Tom Sharpe he improvised with a neat flick of the ball which fell nicely to HARRY WILLIAMS who made no mistake as he fired home, left footed into the bottom corner of the net for his eighth of the campaign. 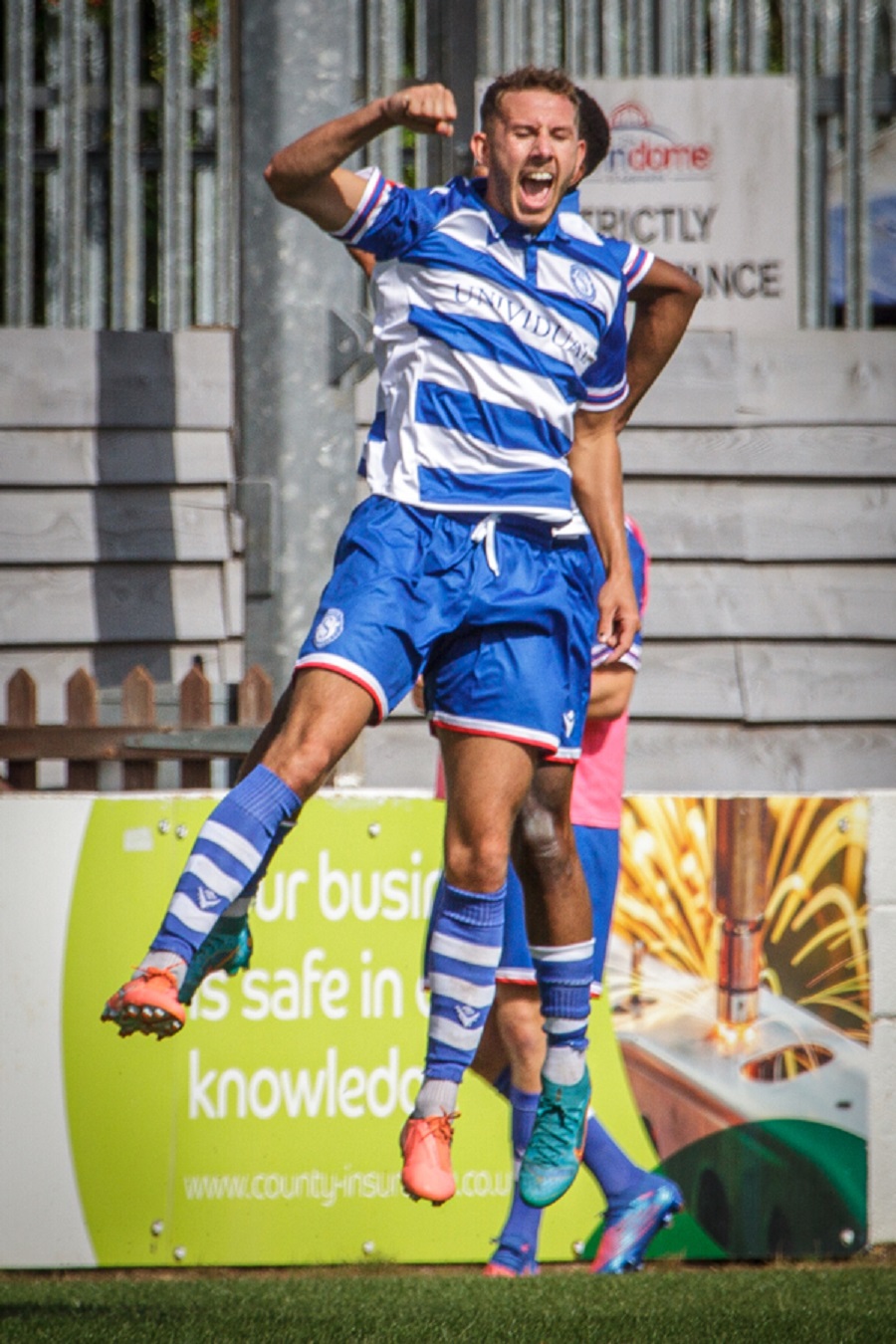 The free scoring striker continued to trouble the Town back line with further efforts but was denied on both occasions by the excellent Merthyr goalkeeper Will Fuller in the goal. Having dominated much of the half Marine took their foot off the gas going into the break and the pressure told right on half time. Marine were sleeping at a short corner routine as RICARDO REES got past Conor McDonagh on the edge of the box and his cross somehow ended up in the back of the Marine goal. The hard work of the half was turned around by a piece of slack defending and missing several opportunities in front of the Merthyr goal. Marine would look to take more off the opportunities in the second period. 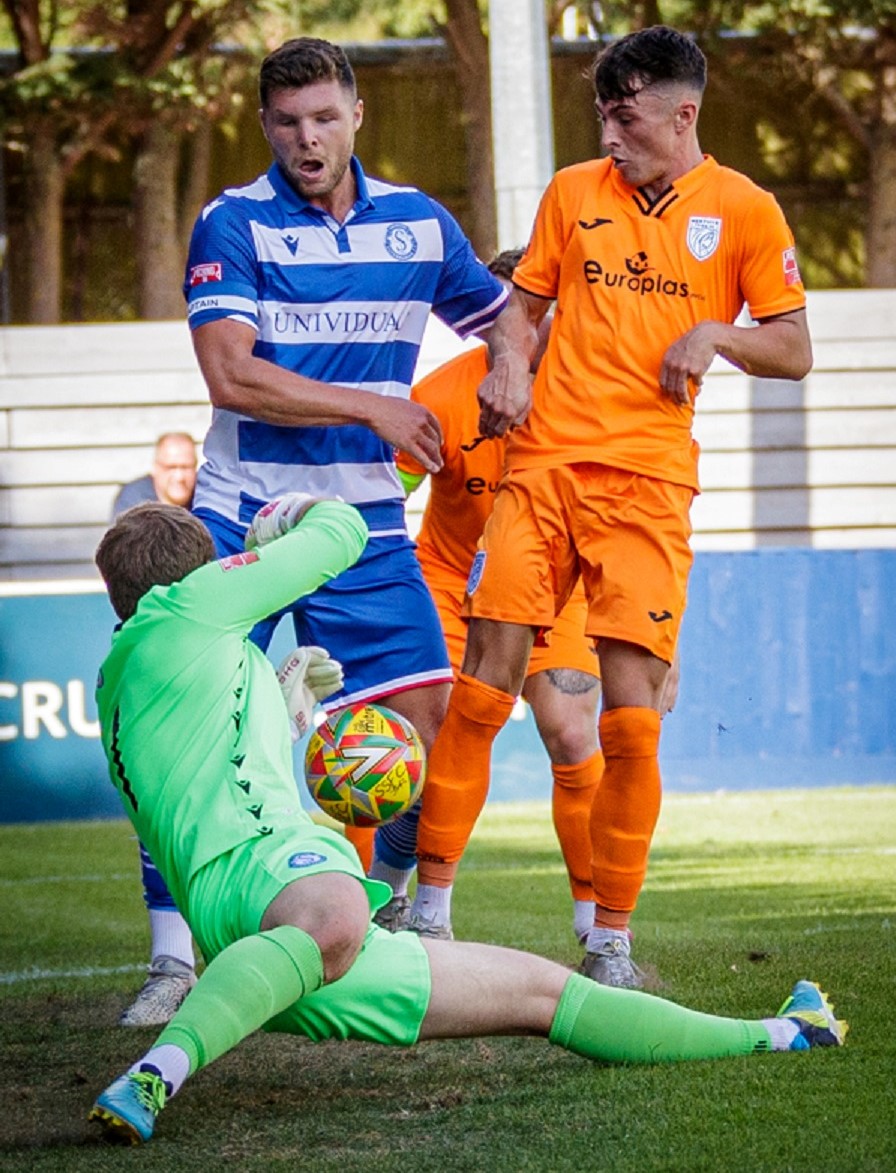 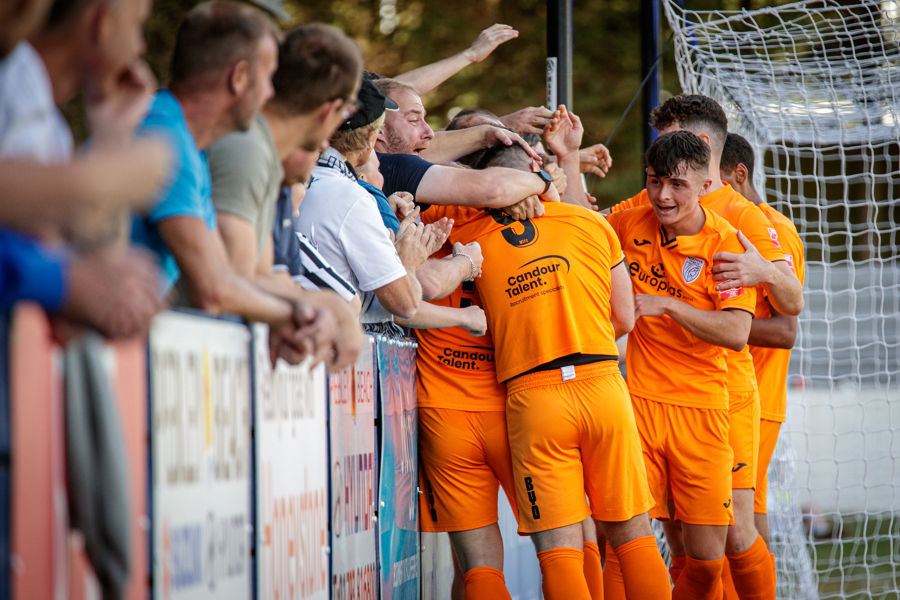 Marie started the second half brightly and looked sharp as they attacked the Merthyr goal. Harry Williams poked a half chance just wide from a good ball from Sam Turl and Sal Abubakar seemed to be brought down soon after but the referee waved away the Marine appeals for a penalty. Ty Duffus then came close from a near post corner but only found the side netting. Harry Williams was denied once again by Fuller as Marine were upping the pressure. The Martyrs responded with a triple substitution to try and quell the storm but it was to no avail. After a flurry of second half corners eventually a deep one from Henry Spalding reached Mat Liddiard at the back stick but he could only just get his head on the ball to he was hauled to the ground by a Merthyr defender. The referee thought for a split second about his decision but blew for a penalty. HARRY WILLIAMS stepped up to send the ball into the bottom corner of the net to give Marine the lead on 68 minutes, giving keeper Fuller no chance this time and adding to his goal tally of nine league goals in six games this season. 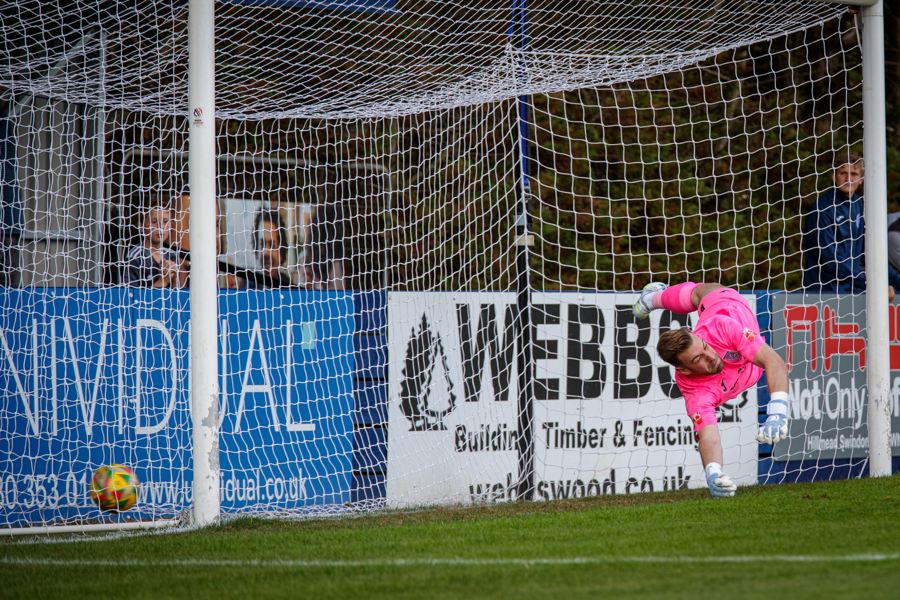 Harry Williams’ penalty hits the back of the net 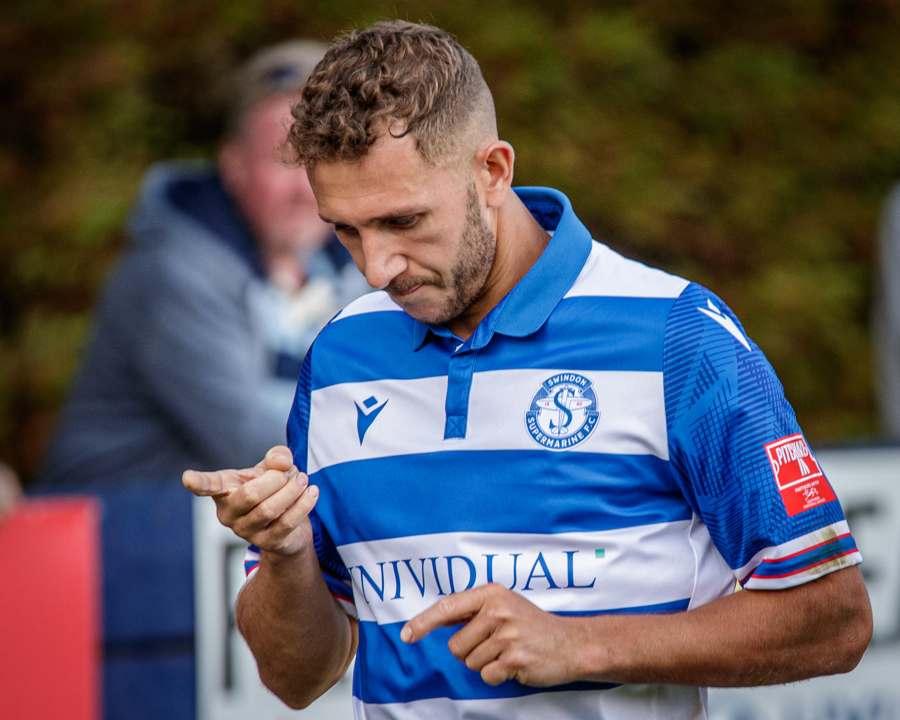 Minute later a fine challenge from Sam Turl to deny the Merthyr attacker saw Merthyr Town boss Paul Michael dismissed for dissent towards the referee. Henry Spalding was then the latest to be denied by William Fuller, with not one but two saves in a row to keep out strikes from the wide man. Williams had a hat-trick chance on seventy-three minutes but put a free header from a corner over the top. With the scoreline still just separated by one goal Conor Johns was called into action from a Ricardo Rees strike from way out as he got down to palm the ball around the post. 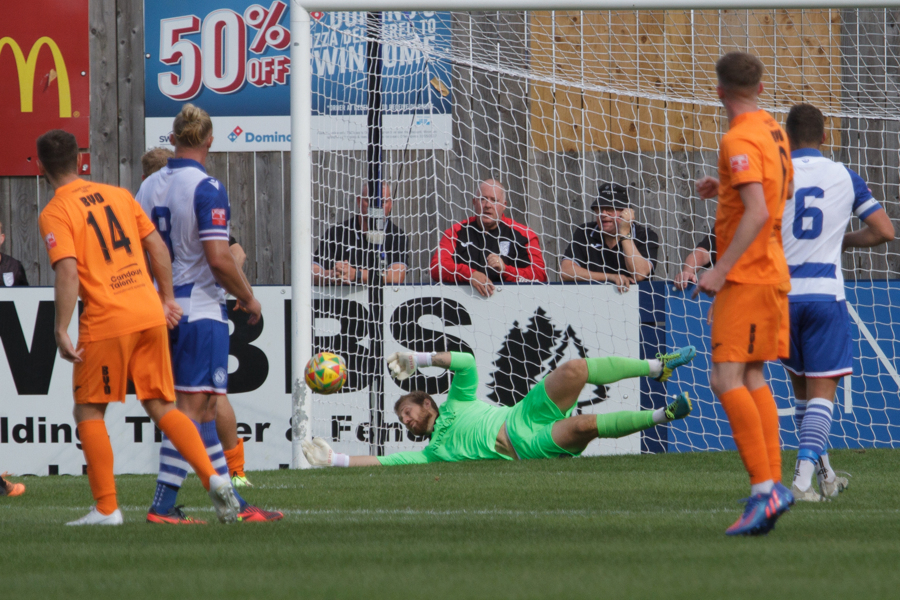 Jamie Edge replaced Tom Sharpe with ten minutes to go and was soon followed by Brad Hooper onto the pitch for Conor McDonagh as Marine opted to hold on to what they had. Lewis Hall was shown a yellow carded as the pressure increased and Zack Kotwica replaced Henry Spalding in the final minutes. But the job was done, with George Dowling excelling in midfield along with the rest of the team for a very good performance. Another three points at home, and three wins out of three, hopefully this form will continue and turn the Webbswood Stadium into very difficult place for our opponents to win. 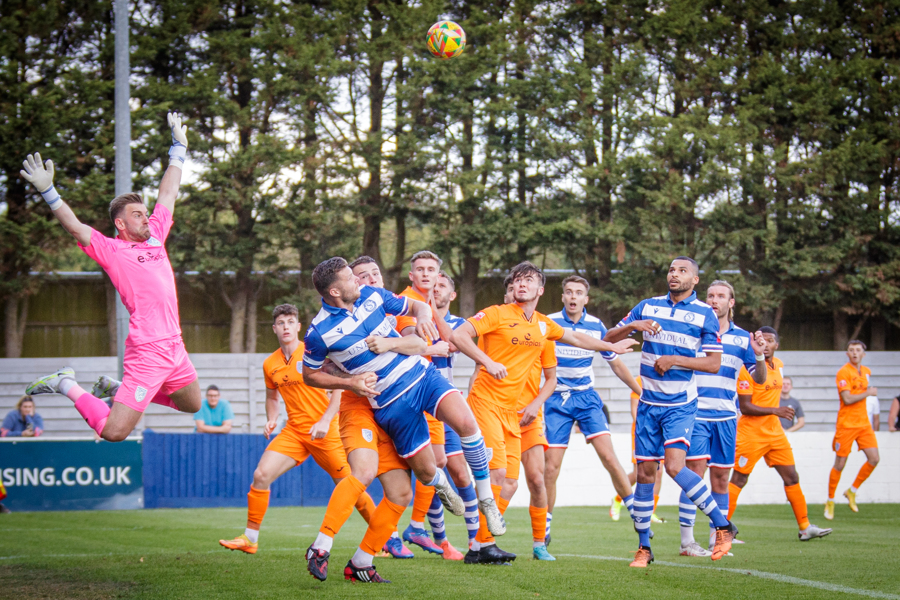 Finally, if anyone is in doubt about the penalty decision, Mat Liddiard is spun around by the Merthyr defender with a what some will call a ’bear hug’?
Photo © Rob Mashford Photography Match Album