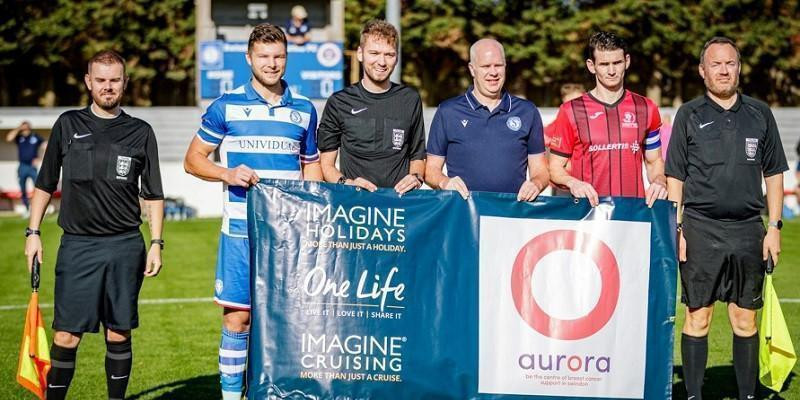 Swindon Supermarine advanced into the next round of the Isuzu FA Trophy with a relatively comfortable victory over Cirencester Town in the A419 derby. As an encounter it was a curious affair. It was a match where the football played was competitive but not fluent. It was a game with three good goals but where the two keepers were otherwise relatively untested. It was also a contest where at times both teams looked better playing the ball to feet but found themselves too often opting for lofted punts up field. 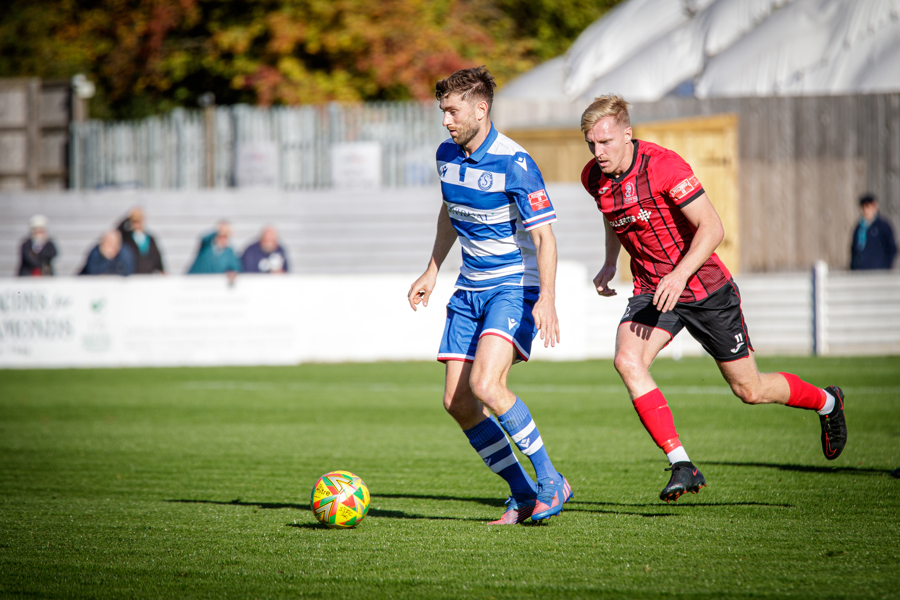 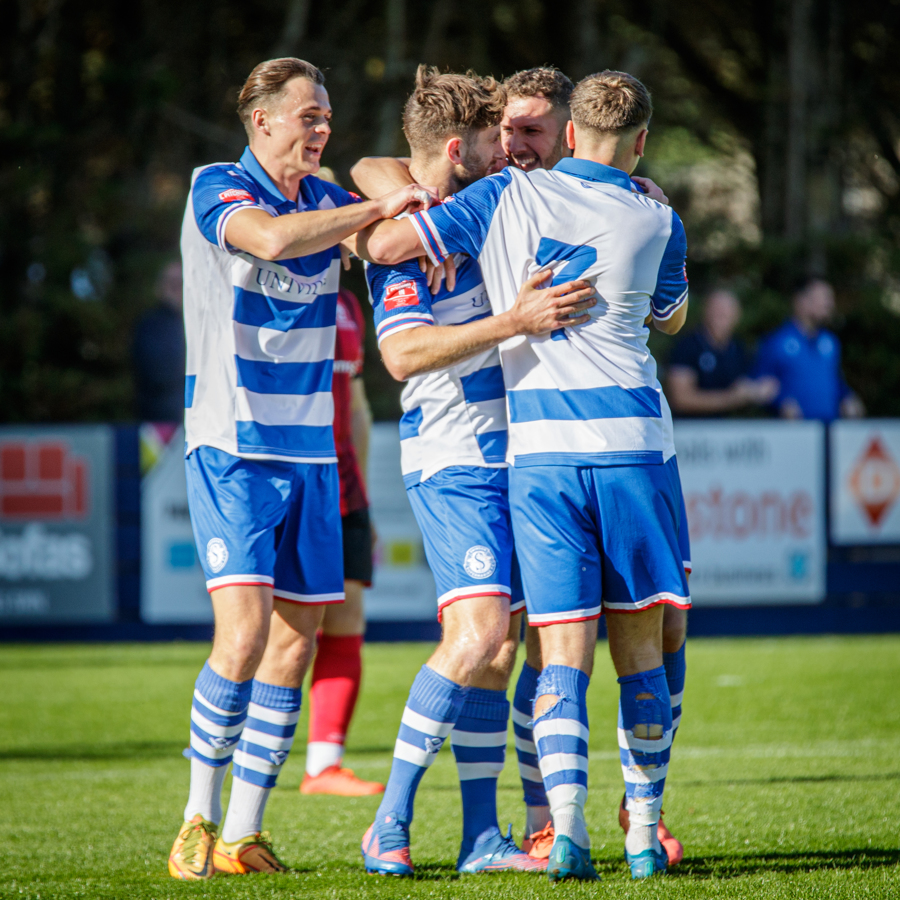 Marine started the match briskly and it was no great surprise when they took the lead in the 10th minute. After a spell of sustained pressure, the ball fell to the feet of Marine’s BRAD HOOPER some twenty-five yards from goal. The midfielder took the ball in his stride and stroked a perfectly placed shot into the top corner of the net for an early lead. 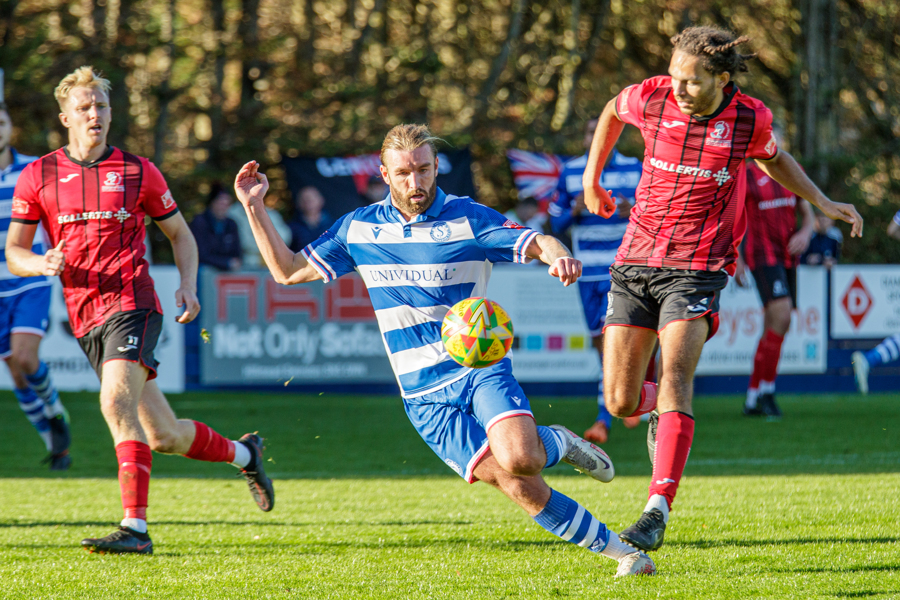 Marine supporters will have hoped that their team would build upon this positive start. However, it was not to be and in all honesty the game got a tad scrappy with neither side mustering a great deal of creativity. It was not lack of effort but too often the ball found itself at the feet of defenders who faced with a congested midfield were forced to hit the ball long. An option which transpired to be the proverbial “meat and drink” for their opposing defenders who then, fronted with the same conundrum as their defensive counterparts, adopted the same long ball approach. For much of the first half this was very much the pattern of play. 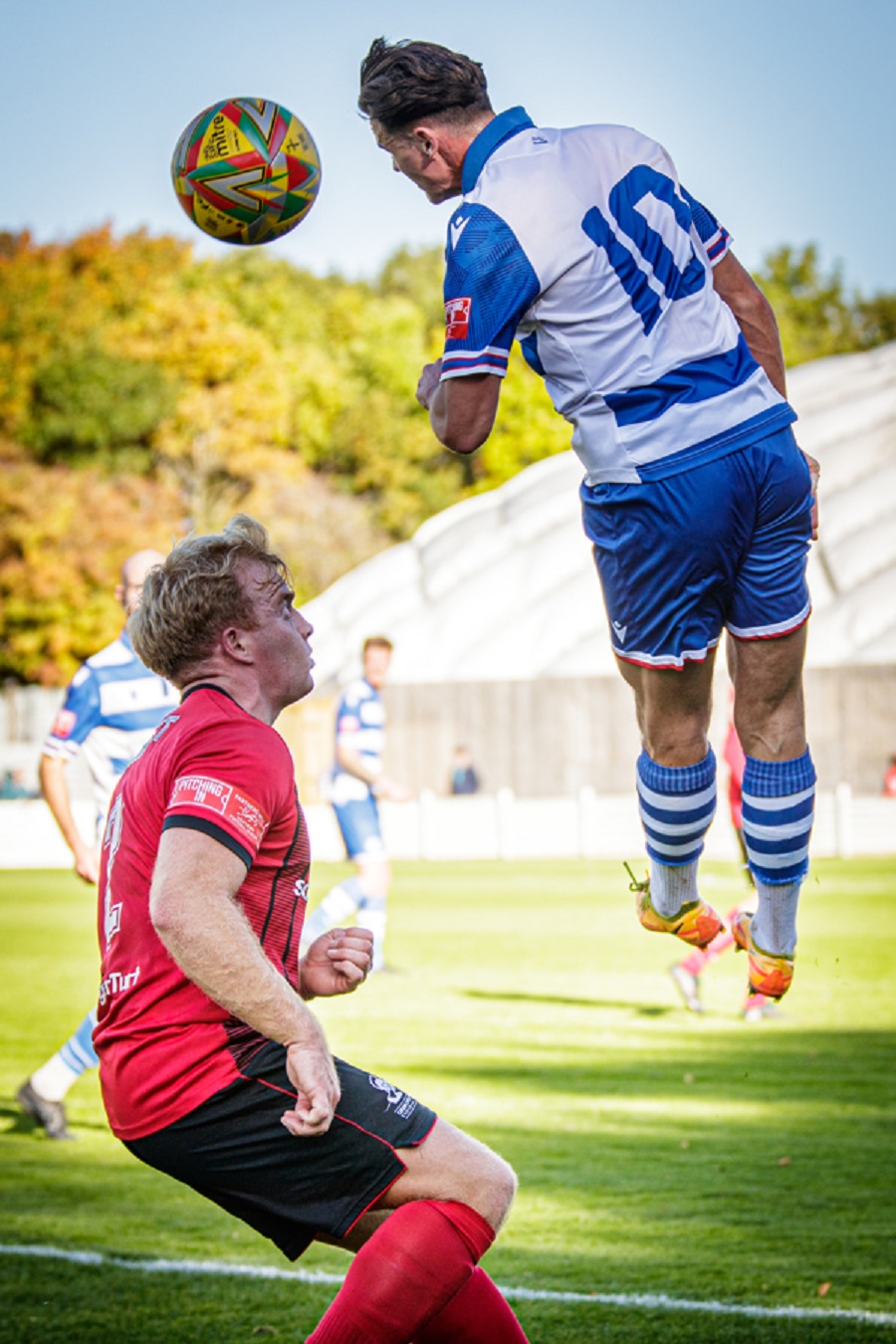 In the ten minutes before half time the visiting Centurions had what was probably their best spell of the contest. In the 36th minute a Morris cross was glanced over the bar by the industrious Joe Shepherd. Then three minutes later a Levi Irving header from a Joe Turley corner slipped inches wide of Marine’s far post and then ten minutes later the half time whistle blew. 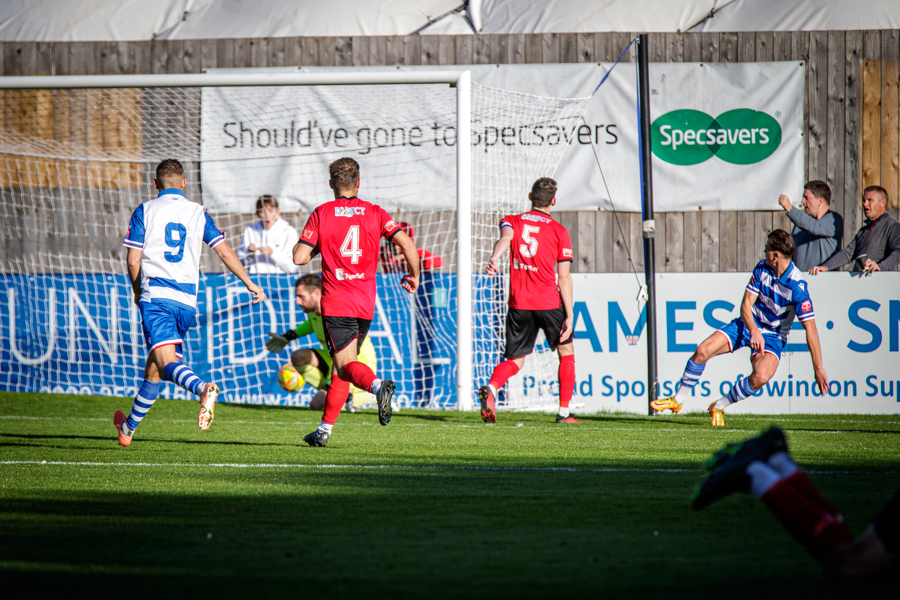 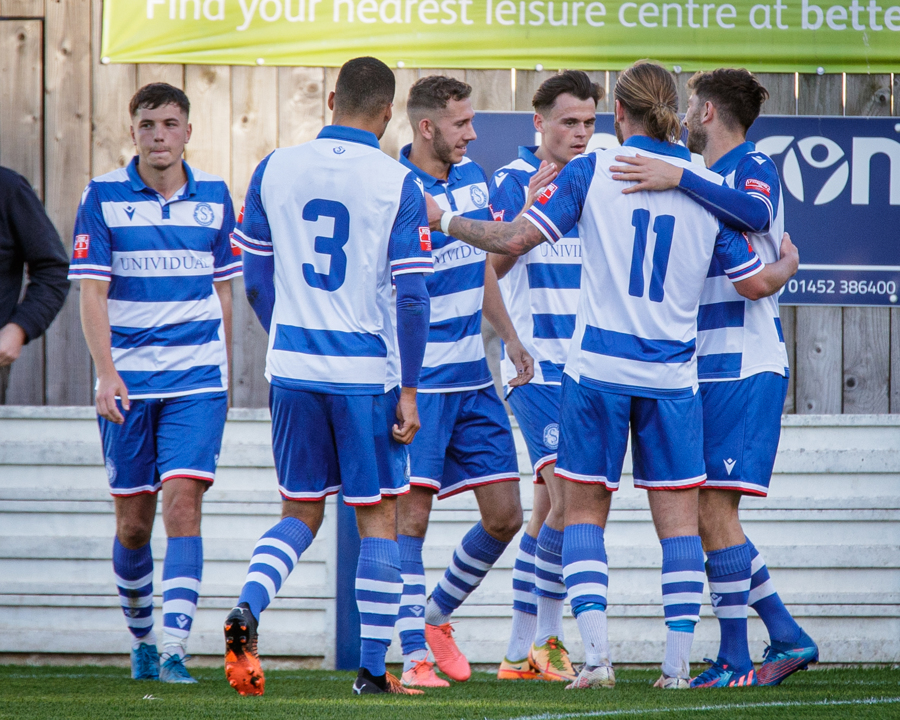 In the 52nd minute Swindon Supermarine doubled their lead. A swift counterattack on the right flank saw a low cross find JAMES HARDING level with the front post and some six yards from goal. The Marine striker deftly back heeled the ball past the visitor’s keeper for an impressive goal poachers finish. 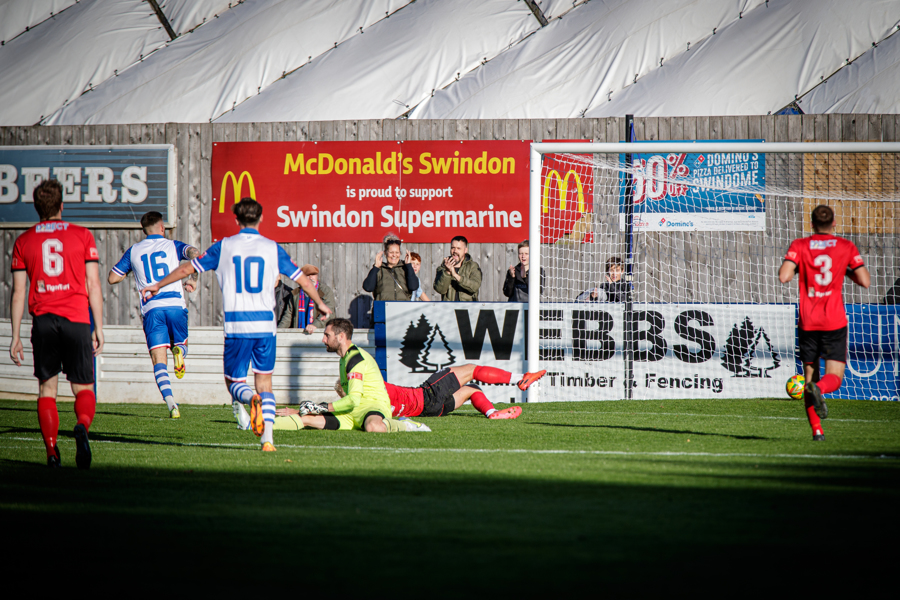 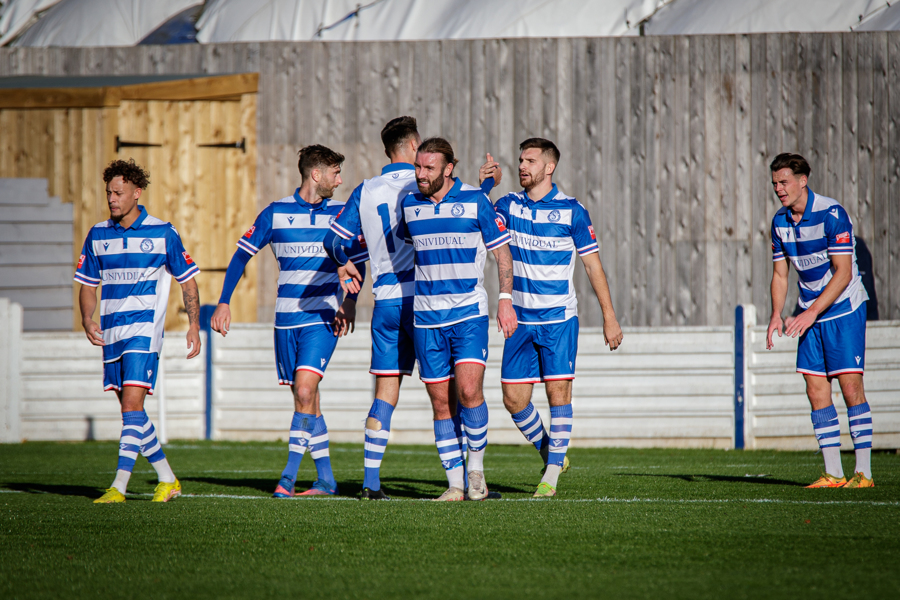 The second goal gave Marine some breathing space as the match resorted back to a midfield slugfest. The contest was essentially settled in the 71st minute. A Cirencester free kick some thirty yards from goal hit Marine’s defensive wall. The hosts then broke with a long ball from Ryan Campbell finding James Harding. The Marine forward appeared to be fouled as he advanced towards goal. However, referee Hetherington, observing the ball fall into the path of Marine’s ZACK KOTWICA, held his whistle making very effective use of the advantage clause. The Marine man shimmied one way and, as the keeper fell to the floor, rounded him and assuredly slid the ball into the back of the net. A skilful finish by the Marine man and an excellent piece of refereeing. 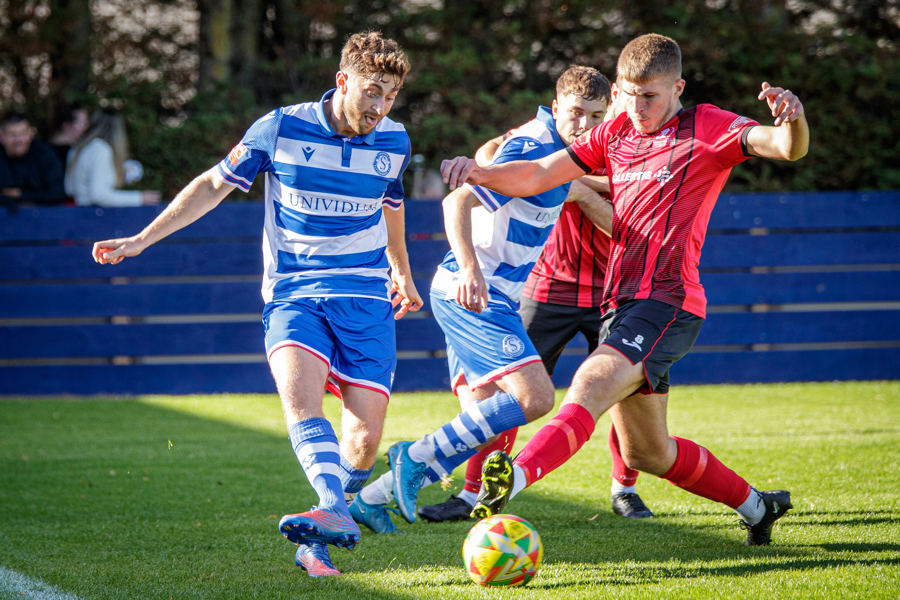 The final ten minutes of the game saw chances at both ends. Marine’s Ty Duffus twice went close having a goalward bound shot intercepted in the 87th minute and a powerful header just clear the bar in the 90th. Meanwhile Cirencester’s Nick Peare had a shot comfortably gathered by Connor Johns in the 82nd minute whilst a Joe Shepherd header was also safely collected by the Marine keeper in the 92nd minute.

In terms of plaudits: • Cirencester Town’s Levi Irving was lively up front and Joe Shepherd put in a typically tireless shift in midfield. Collectively Cirencester Town’s players battled to the end and showed a positive team spirit. • Marine’s back four of Duffus, Morrison, Liddiard and Turl effectively limited the visitor’s goal scoring opportunities. • Brad Hooper put in a player of the match performance in midfield and scored an excellent goal. • Marine, whilst well short of their fluent best, scored two good second half goals with accomplished finishes from James Harding and Zack Kotwica. • Referee Hetherington and his assistants handled the game well and the use made of the advantage clause for Marine’s third goal was excellent officiating.

In closing this was, from a Marine viewpoint, a “job done” performance. The team was not at its fluent best but still managed to score three quality goals. From a Cirencester Town perspective they battled from start to finish but were undone by a combination of defensive frailty and a lack of cutting edge.